A game that feels like elements from Tron Legacy, Thumper, and Neon Drive, but also is none of those things, GRIDD: Retroenhanced ($11.99) from Antab Studio is here to blow you away. GRIDD: Retroenhanced is a multi platform game, but the XBOX One is the version that we’ll be looking at today. Does this game have what it takes to stand out in a world of retro-futuristic video games or is it just another dud? Scroll on, because today, we review GRIDD: Retroenhanced for the XBOX One.

If you’re wondering what this game of the past is really about, we have a break down for you.

‘GRIDD: Retroenhanced is an intense arcade-style cyberpunk hacking shoot ’em up with an incredible soundtrack, procedurally generated elements, and electric visuals. Pilot your craft to hack through an evolving set of punishing enemies, deadly lasers, and other fiendish obstacles as you attempt to take down an unrelenting security mainframe to take out the system’s AI, and cement your place on the leaderboard! Inspired by cyberpunk dystopian films, early home computing, and a pulsing synthwave soundtrack from Dream Fiend, Gridd takes a classic bygone era and evolves it into a modern arcade experience.’

The game is simply a sight to behold, so behold! I have a trailer for you to set your eyes on!

The audio of this game I found is something to be desired. It’s most likely attributed to the fact that the music takes most of the spotlight. However, I did feel that the sound effects just were too hokey and predictable. I’ve made this complaint in the past about certain games, but I have to bring it up again. If you’re creating a whole world that is new and yours and has its own set of rules, why go with the same ol’, same ol’. I know what a smash sounds like, I know what lasers sound like. Give me something new, my ears deserve what my eyes do.  I’m not saying that hearing things that I’m used to is a bad thing, it’s just too commonplace anymore. Years from now, if I’m still complaining about this, I’ll just assume it was laziness.

As far as the quality of the sound effects, of course they sounded fantastic. They not only sounded fantastic but the 3D sound aspect was great too. My surround sound made the experience much better. As you are breaking apart stuff with your lasers and the pieces fly to you its almost as if you can hear them getting closer to your ship. It was definitely a delight that I picked up on. 7/10 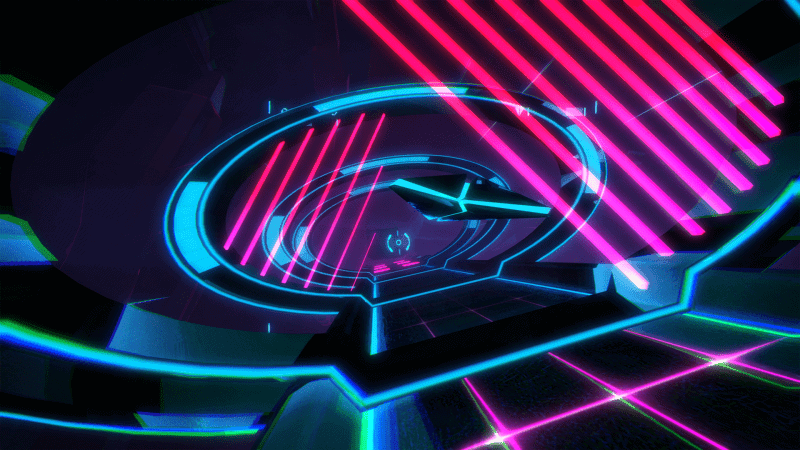 So I was going to gush for 30 years straight about how much I loved the music in GRIDD, but then I thought that that would be just too much. You can already tell what kind of a score that I’m going to give the music, I’m sure. By now, you have to just know I’m a sucker for retro inspired music and this game leaves me no worse off. The soundtrack may sound repetitive to the untrained ear but as you fall further down the game’s rabbit hole, you’ll find that the music definitely evolves. Now, since the game is one long path or course, it’s hard to discern where the music changes. I swore at times that it dynamically changed with the boss fights or when traffic became heavy. But then at other times, I swore that the music just changed the further you made it down the track. It’s just so hard to tell for certain as you have to restart if you die since the game is more of an arcade style shooter. Nevertheless, I loved its bass and all of its nu-wave catchy synth. Mark me down as impressed. I would give it a perfect score, but the music does get a little grindy the longer you play it. But to that end, I would say that there has to be someone out there who would love to listen to this soundtrack nonstop. 9/10 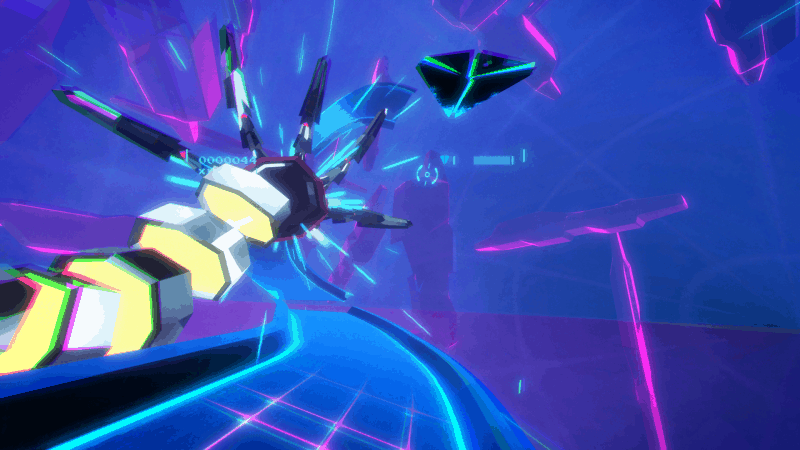 This isn’t a game that tries to reinvent the wheel on graphics either. It takes a lot of inspiration from other games. I see hints of Geometry Wars and Galaga (naturally) and lots of movies and music videos. I would almost say that it was copying things, but it brings new things to the table. It keeps the lane dark but has neon lines coupled with a hazy purple background. It sets an eerily beautiful scene that is the backdrop for what is definitely organized chaos. I have a love hate relationship with this game’s visuals as you may be able to tell. I actually wish I could slow the game down a bit, not to make the game any easier on me, but just so I could relish the greatness that is most likely just flying right by me. 6/10 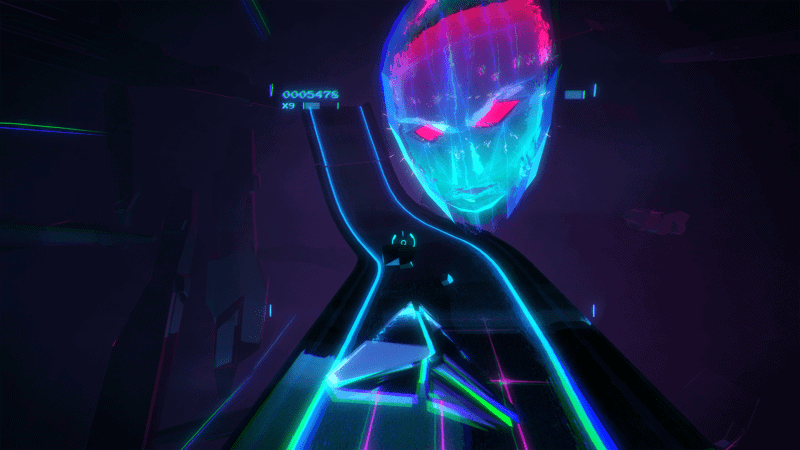 Usually, in my reviews, I like to put the most amount of focus and effort into the gameplay section. After all, it is the biggest reason that you play a game, well normally. However, this game doesn’t take a lot of explanation to really convey to its players what they need to know. So in that vein, there is truly not that much to talk about here. There are no continuous tutorials throughout it, there’s no real learning curve, it’s very much a pick up and play kind of game. The fact that it’s arcade-style lends itself heavily to being replayed time and again (see the next section). So what’s the main objective? It’s similar to most arcade games which is to go as far as you can in the game before dying. Whilst doing this you will pick up power-ups and gain more shielding too. The way that you build up more shielding is by flying past the shrapnel of whatever you had just blown up and it will be attracted to your vehicle and become part of it so to speak. And that’s it in a nutshell. The more you can dodge objects while flying around, the better luck you’ll have.

Is the gameplay difficult? For me it most definitely was and I mean I got frustrated a lot. It wasn’t the good kind of frustration like when I’m playing TMNT: The Arcade Game or Time Crisis 3 or Dance Dance Revolution and things keep me from getting ahead. This game seemed so difficult from the get-go and I definitely had a hard time enjoying it for what it is. I know that this game was favorably received on Steam when it came out before this console release. I don’t think it has anything to do with the fact that I’m playing it on a console. I just think that they didn’t give me any kind of a grading curve (which, to clarify, is different than a learning curve). I know arcade games and arcade games almost consistently start slow with the challenge and then increase the difficulty as it goes along. And for the fact that this game doesn’t give me that, I have to give it a 5/10 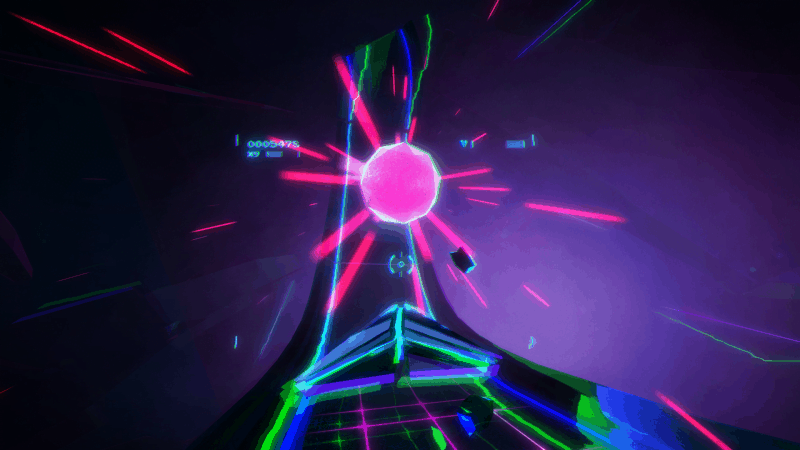 Since this game is exclusively arcade mode, it stands to reason that this game is almost entirely all replay value. Just as you would have to memorize how to beat a game at the arcade, the same holds true here. You are the master of your progression. None of it is randomly generated and it doesn’t switch up anything on you. How far forward you can make it in this game is entirely on you. The first time I played it through, I got a decent amount of the way. The second and third times, I did not. So you can see that it is just waiting for you to play it time and time again and try to beat your last high score. Could there be an easy mode with checkpoints though? Probably. 8/10 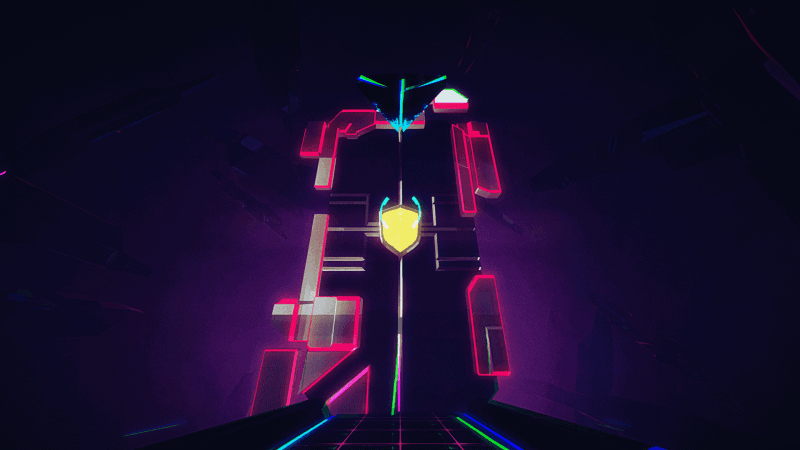 If you’re ready to enter the GRIDD, I have the game download right here for you.