The SNES Classic Mini & What you need to know

No matter what happens, some memories can never be replaced. If you think that we are talking about love, well, in a way yes. But we are talking about the love of reliving an iconic era of video gaming on one of the most loved consoles in gaming history. Are you ready to fall in love with the SNES Classic Mini this September 2017? 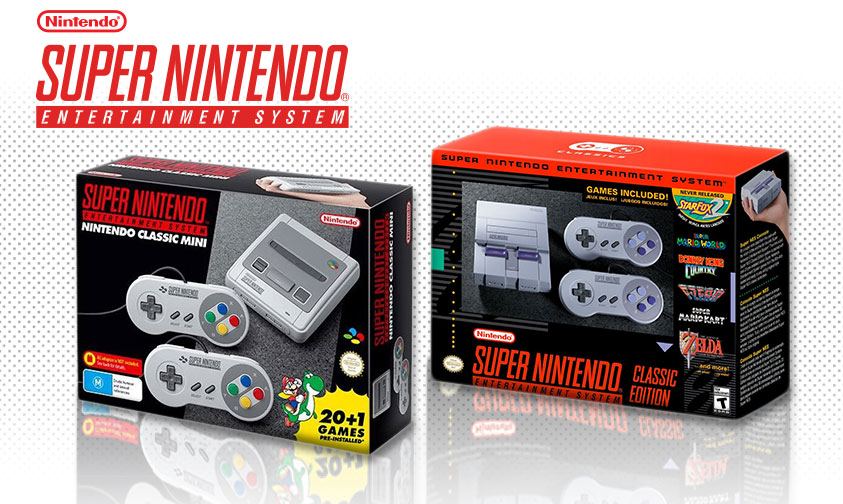 Nintendo offered a nice surprise for their fans on 2016 with the unexpected resurrection of NES Mini. It’s a miniature replica of the original NES console which has 30 games pre-installed that were available for the 1980s Nintendo Entertainment System.

But its popularity was short-lived because of a few issues that fans picked up on. Some of these issues included the short controller cables, unavailability to buy new games, and no support for any original accessories. In addition, it only had a short production run of around 5 months.

However, despite these minor problems the NES mini classic was a huge hit. One of the great positive aspects of the console is that it houses a new Nintendo Entertainment System emulation engine developed by Nintendo European Research & Development (NERD). The emulation engine was well-received by critics and was regarded as superior in both visual and audio support when compared to the NES Virtual Console emulation on the Wii U.

For video output, the system features an HDMI connection, which puts out 60 Hz video for all games.

The controllers in the international version of the console feature the Wii’s Nunchuk connector, which allows the controller to be connected to the Wii Remote for use with Virtual Console games on the Wii and Wii U. Likewise, accessories for the Wii such as the Classic Controller may be used with the NES Classic

Roll on 2017 and the much-anticipated release of the Super Nintendo Entertainment System, or SNES Mini Classic as it’s affectionately known.

The SNES Mini Classic is the latest dedicated video game console from Nintendo, which emulates the Super Nintendo Entertainment System. The console, a successor to the NES Classic Edition, comes with twenty-one Super NES titles pre-installed, including the never-before-released game Star Fox 2.

The console is distributed in three variations, featuring the unique design of the original systems released in North America, Japan, and Europe. The versions depend on which country you live in. 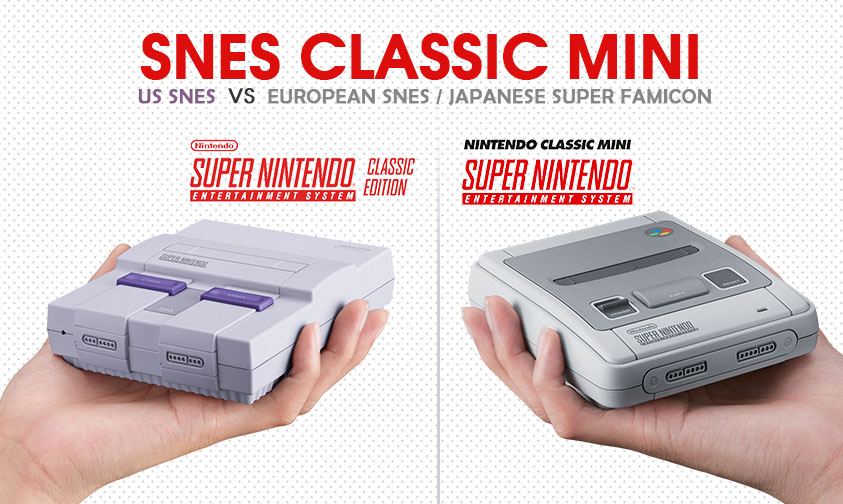 Just like the original SNES, the European and Japanese markets will get a mini version of the traditional Super Nintendo and Super Famicom respectively. 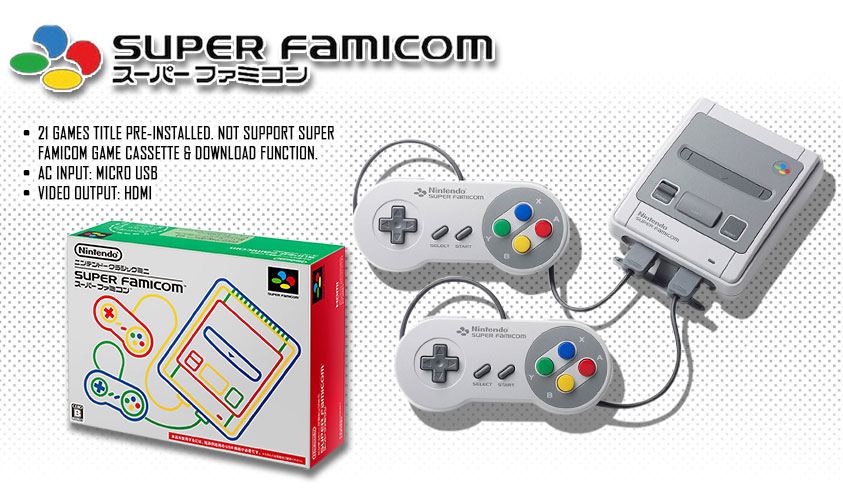 The design of both the consoles is the same in the said region which will be cuter and a smaller version than the original. While the North American release features an appearance based on the straight-angled gray-and-purple design of the SNES.

It is worth noting too that for fans who have been an avid follower of the SNES Mini Classic, Hori has announced a new wireless controller for Super Famicom Mini. This is a reprint of the original 1992 Fighting Commander controller. The only difference now is the fact that it is wireless! This new model is a commemoration of the 50th anniversary of Hori Co., Ltd. 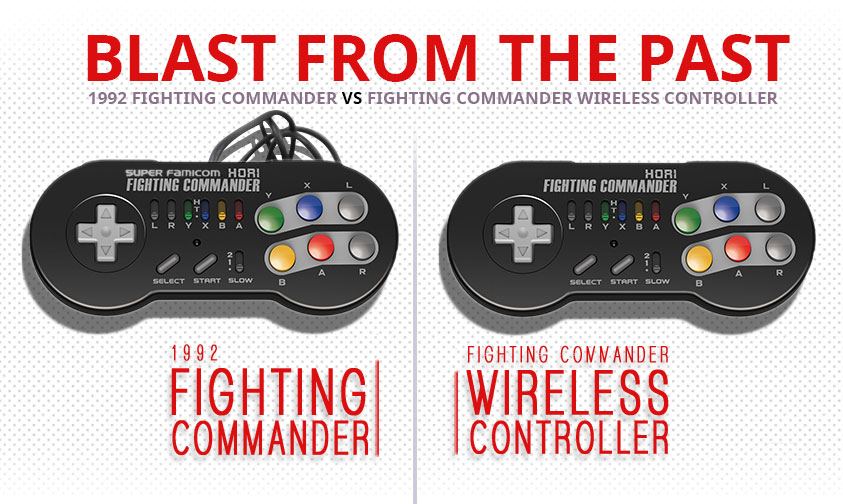 The Fighting Commander is definitely a perfect fit for fighting games on the SNES Classic Mini. It sports the usual D-Pad as well as the ABXY button. Beside it are the L and R buttons. A “slow motion” switch allows players to create a “slow motion” effect in the video game, which activates the START button 10 times a second. There’s also a “rapid fire” switch for the ABXYLR buttons which activate the A, B, X, Y, L, and/or R buttons 24 times a second.

The controller ports are hidden behind a faux front flap which is designed to appear like the original Super NES controller ports. Similarly to the predecessor’s controllers, the Super NES Classic Edition controllers have connectors that can be inserted into the Wii Remote, and be used to play Super NES games on the Wii and Wii U Virtual Console.

The Wii’s Classic Controller is also compatible with the Super NES Classic Edition.

The NES Classic had two major flaws that are too obvious for users not to be able to notice. First, the controller cord is quite short. Second, there is no way for players to reset the console, much more to turn the console on or off without exerting too much effort in leaning in as well as pressing the power button.

But Nintendo has taken notice of their customers and the fans’ demands. And with the SNES, one of these issues has been addressed. Now SNES, gamers will be able to expect a 5-foot long cord which is twice the length of the NES classic controller.

On the other hand, in an interview of DigitalTrends.com with Nintendo representatives regarding the latter issue, it was said that:

Nintendo representatives declined to answer questions about the SNES Classic Edition’s ability to power on and off using a controller shortcut. We can only guess, but based on the length of the controller cord, we’re going to bet that you’ll still need to lean in and flip the power and reset sliders.

If you were able to get a hold of the NES Classic Edition, then you probably cannot help feeling a sense of awe, especially when it comes down to the quality of its emulation.

Like many hard core gamers, the quantity of game pre-installed on these systems might seem a little bit small, considering that there were 721 licensed SNES games realized in North America Alone.

It’s no secret that the emulation community has already jumped on this and already found a way to add additional ROMS to the NES mini Classic without causing any damage to the system or physical interference to the console itself.

Whilst Nintendo has kept quiet on the matter, it is curious that the console has an oversized internal memory that lies dormant. Hence, this appears to invite the possibility of ROM updates.

Although there has been no official software release from Nintendo, everything points to Nintendo doing the emulation community and its fans a huge favor by providing the system with just enough “extra” memory to hold the full official Nintendo ROM suite for the NES.

Fans will be eagerly waiting for the SNES Mini to see what’s under the hood and if there is an opportunity to make this the ultimate retro gaming system.

Back on to the games, doing the math, that’s 30 on the NES classic mini versus 21 on the SNES classic mini. A bum deal you say… No, not really, as the SNES Classic Mini brings some big guns to the table, with a quality over the quantity lineup of classic games. Let’s check them out below! 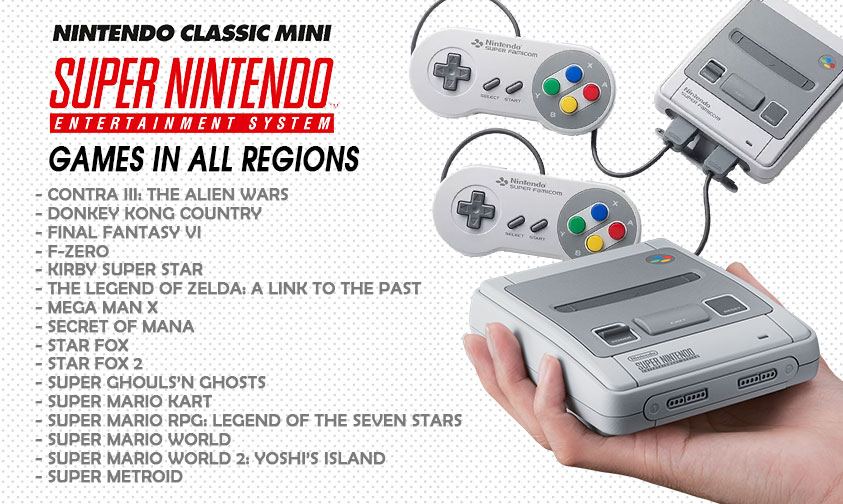 The Legende Of Zelda: A Link To The Past 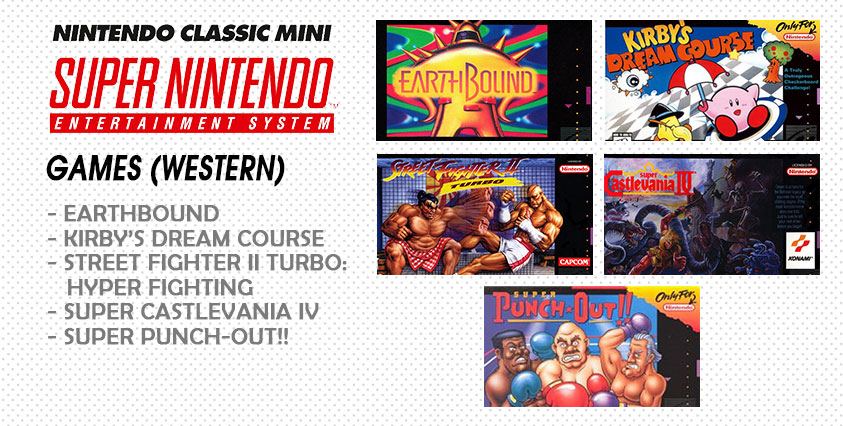 More Than Just An SNES Emulator

The SNES Classic Mini promises itself to be a standout this 2017 in the comeback of a retro gaming console. But it is more than what you are expecting it to be. Just like the NES Classic Mini, the SNES will send you back to a time wherein the physical cartridges will allow you to integrate the custom hardware on a per-game basis. Doing so will allow games to progress the potentials of the hardware.

Par excellence as a standard has been elevated by SNES Classic Mini with its introduction of the SuperFX. 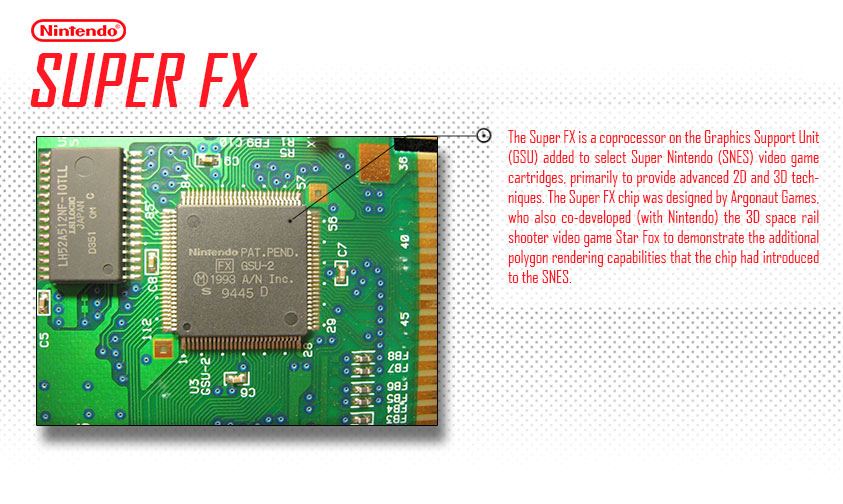 With the SuperFX, Nintendo hopes of having their SNES Classic Mini achieve a higher emulation accuracy compared to its predecessor, the NES Classic Mini.

What’s In The Box?

An all-new feature lets you rewind a minute or more based on your game’s last suspend point. Each game can save up to four suspend points.

Many of us remember this classic console which touched our lives during our childhood, and for the younger generation who are now able to experience these classics for the first time and welcome to a whole new group of gamers to the SNES, we say thank you Nintendo!

We will have limited stock of the SNES Classic Mini and tentatively may open orders on the 29th of September 2017, as yet to be confirmed.