The ultra popular, multiplatform (roughly 14 platforms!) game Retro City Rampage by Vblank Entertainment has finally reached the Switch ($14.99)! The DX port of the game is anything but as it has some serious improvements baked in, making this the most polished version of the game to date. To find out more about the game, pull out your Zapper Gun and let’s pull the trigger on this motherducker! 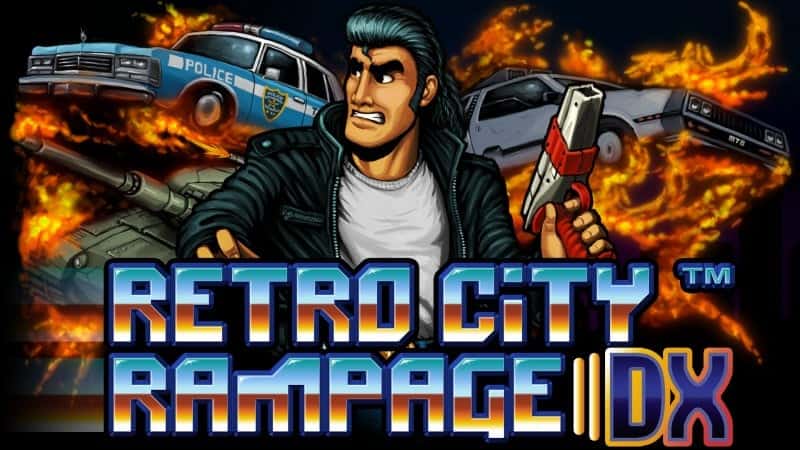 Feel free to put on your Power Glove and scroll through this list of features:

Grab your board and Skate or Die over list description:

This remastered pop culture send-up features a full Story Mode of open world missions, along with Arcade Challenges for quick pick-up-and-play action. Explore the city by foot or by car, and discover minigames, customizations, collectibles, special guest stars, and more.’

And as we mentioned before, the developer has issued some improvements, take a Warp Tunnel down this list of improvements:

‘Like each port before it, it contains little tweaks that polish the game even further (I just can’t help myself!). From little things like the slightly more stylish score display to improved enemy stomp and swimming controls, to improved lock-on targeting, and mission difficulty tweaks. If you couldn’t beat Death Cam VHS before, you’ll have a leg up on Switch!

Before we leap over this barrel and down the ladder to this review, you’d better check out the radical trailer!

Okay, I’m glad that I always start my reviews with audio, because it’s something that is near and dear to my heart. I love to hear great sounds and then mimic them all while playing the game happily. And boy, does Retro City Rampage DX does in no way disappoint me. I wouldn’t even know where to start to talk about the audio in this game. There’s car crashes, various bullets, sounds that are supposed to represent other NES games (without ripping them off) and just so much more. And all of these sounds are plastered together beautifully in some sexy 8-bit salad of grandeur. I just can’t even think of a game that has done what RCR:DX has done so magnificently. It sure could’ve sounded like a mishmash of crap in intense shootouts, since it’s essentially a retro version of Grand Theft Auto, but they did it right. They found the balance and it plays so well on top of the chiptune soundtrack. I only ever get irritated in games (even with good sounds) when I have to replay a section of the game over and over again because the sounds get annoying to continually hear. That just wasn’t the case with Retro City Rampage DX as even when I was dying and replaying a section, I was having a blast and mimicking all of the sounds coming out of my speakers. 10/10

Speaking of Retro City Rampage DX having a chiptune soundtrack, it doesn’t just have a chiptune soundtrack, it has a chiptune soundtrack that is TWO AND A HALF HOURS LONG. That’s a damn Christopher Nolan movie y’all! The music is evocative of all of the great music that came out of the NES days. Some of it definitely makes you feel as though you are playing the game that the mini-game you’re playing is paying homage to, but you also have so much original music in this game. I was so impressed by this game’s music. There was even a point in the game where I didn’t even realize that I was paying that close of attention to it, but then I realized that I was humming one of the songs that were playing during a scene where I had to run over loads of people to get my 3rd party Delorean charged up. I never really felt like I heard the same music more than once either. Now granted, if you play the game long enough you will find the same songs again, but I wouldn’t mind. Good soundtracks make you want to hear them again and again (there is even a radio station functionality [like GTA] in the pause menu), and Retro City Rampage DX does just that. 10/10

This one is an easy enough subject since what you see in these 2-dimensional screenshots are actually representative of the final product. If I were reviewing a fully 3D rendered game, I could talk about all of the nuances and/or the issues that come with 3D games and how it looks. But we have to be really real with ourselves here, Vblank Entertainment did a stupendous job representing old school NES games, while also adding newer elements that make things easier overall for the player. What I mean by that is that it is easier on the eyes so that you don’t have to strain your eyes. And I mean so much more clarity that olden NES games. You can easily discern words on the sides of buildings, you can make out entirely separate shapes, and everything is definitely pixel perfect. This game may be styled as games from 30 years ago, but it is very clean and clear. If you pay close attention to the characters and vehicles you will see some familiar-esque faces and great homages. I mean why stop at characters and vehicles, practically every single building and section of town is a throw back to the 80’s somehow. So visually, this game lives up to its name.

But in terms of visuals, this game doesn’t stop there. You can actually change elements of the visuals as well. If you pause the game, go into the Video and Audio section of the menu and scroll down you will have a plethora of ways to manipulate the game. There is a ‘TV Simulation Mode’ section that lets you change the border around your game, which may in terms shrink your game down for added difficulty but also coolness. A ‘TV Color Mode’ which gives you 24 color options to choose from. Then you also have a ‘HUD Mode’ which gives you several ways to manipulate how the screen displays your vital game information in game. And lastly, you have ‘Screen Zoom’ which gives you 1x Zoom Out, 2x Zoom In, and 3x Zoom In. All of these sections can be mixed and matched to your liking! This game is just chock full of awesome in every nook and cranny. 10/10

Full disclosure, I’m going to give this section of the game a 8 out of 10. This game is a near perfect game, and I mean that. You have missions a plenty, 60 to be exact. You have 40 arcade challenges, and they are the difficulty level of an arcade machine, mind you. The game also features loads of customizations and lots to unlock. So why would I give the game a 9 out of 10 if it has all of these great attributes? It really just comes down to the reading. See, I’m a sucker for a story in a game. If there is ever a single player and multiplayer mode, I will always play the single player first. In this game, you obviously only have a single player experience, so it is more obvious if the single player mode has issues. I wanted so badly to be able to read what the characters were saying more, but the game rushes through it. I’m not a slow reader by any means, and maybe the story doesn’t matter all that much, and maybe they were trying to pull off what NES games did way back when, but I definitely wanted to let it let me decide when to advance the screen. A simple patch to add a slow, medium, or fast choice for text advancement or maybe just an option to press the A button whenever I’m done reading.

Other than that, I’m absolutely mesmerized by this game and how much it accomplishes with such small sprites. There is so much packed into this game, I swear it. The different missions seem to have you recreating scenes from some of the most fun games from yesteryear. They also have plenty of gameplay modes that are specific to the game that keeps you on your toes and makes you have to learn something else that you didn’t previously have the muscle memory for. I also loved how the missions were not super long and over the top. You get the objective and you get the instructions on how to accomplish said objective and then you do it. The game is rather forgiving, it seems to let you try over and over again until you get it right.

The developers clearly just wanted you to have fun and not be penalized for not being good at something. That is always the worst when games have you go way back somewhere else because you died after 3 lives and then you just say screw it and leave said game unfinished. This game wants you to just have fun. I couldn’t find a better use of your money on $15 for your Switch. I would say more about the game, but it’s rather hard to review because the game is essentially loads of other games all rolled into one. So, I would say that if you love your NES and you love your collection of NES games, buy this game. And even more so, but it for the Switch because it is the best looking, most polished portable version of this game. 8/10

This game probably has a lot of replay value. The problem here is that the main game is so fully loaded with magnificent gameplay and stuff to do with in it and being able to run around freely and do whatever you want…you should have a very hard time actually finishing the game in the first place. And even if you feel yourself getting close to the end, odds are that you are going to want to stay in and ram some more cop cars, listen to more cool music, find more easter eggs, laugh at some more one liners, score some more cash, ride a gorilla again, steal one of every car, just loads of stuff. And that is me not even mentioning the fact that this game has built in achievements. So even though the Switch doesn’t have an achievement system in place, the game still rewards you and lets you look through the list so you can then go out and try to accomplish said tasks. This game is an instant classic about, well, classics. 10/10

If you’re into the whole retro thing, no worries my dude, the totally tubular game download can be found by clicking here.