Deadcore was just released (XBOX One/PS4, $7.99) and it’s a speedrunner’s dream. The FPS platformer is courtesy of Grip Digital and 5 Bits Games. Is Deadcore a free flowing masterpiece or does it fall flat on its face? Read on, my friend. 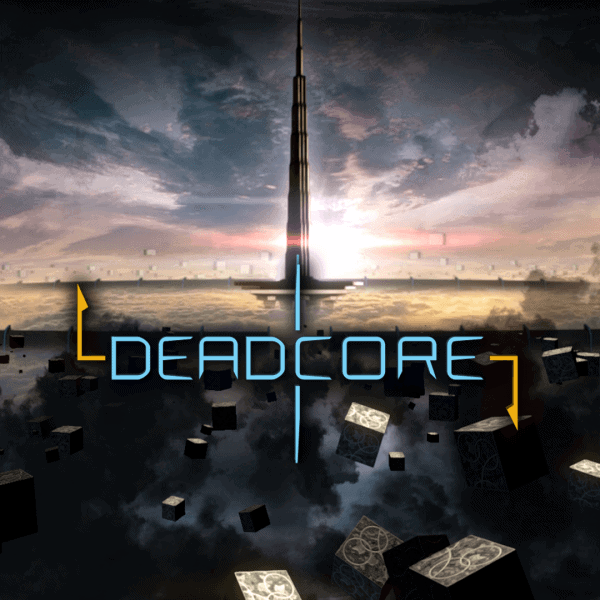 Since this game is unique, I thought that I’d start by giving you the run down of the game from 5 Bits Games themselves.

‘Your objective is to climb a gigantic Tower: on your way to the top you will have to fight robots guarding the Tower but also to handle tricky platforming sequences, sometimes both simultaneously.
Hopefully, you are equipped with the ‘Switch Gun’, a special weapon allowing you to activate or deactivate temporarily most of the Tower elements, like robots for example.
Sometimes you’ll have to find the right things to activate/deactivate and the right order to do so in order to solve environmental puzzles.
During your progression, you will find power-ups that will grant you new abilities, like a powerful ‘Dash’ allowing you to reach new places and to play differently the levels.
There are also other types of collectibles to be found to unlock new contents: narrative logs, new maps, new music tracks…’ 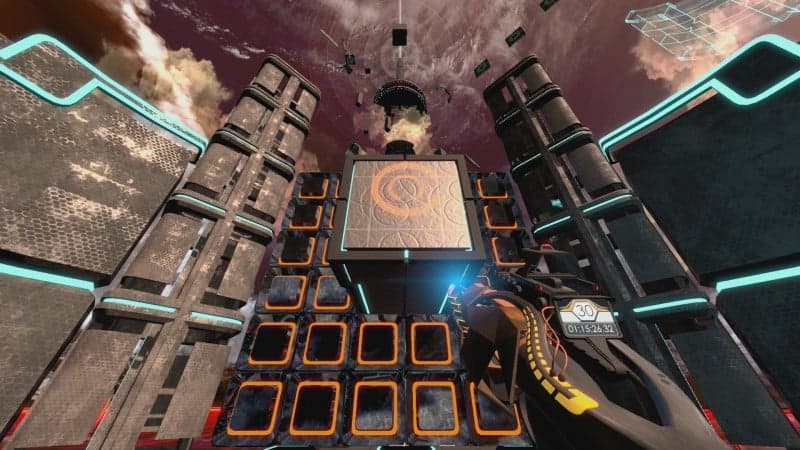 The audio almost seems like it’s ripped off so many other things. From the gun shots to the jump pads to the other lasers in the game. You’d swear you’d heard it all somewhere else before. I’m not accusing them of plagiarism, but rather just a lack of creativity. You have all new guns, all new jump pads, etc, you as the game designer get to choose what they sound like. We as the audience have never, ever heard these things before. I was just not even remotely impressed with the all too generic sounds. And maybe we aren’t supposed to be? Maybe we’re only supposed to focus on the continual parkour type maneuvering, but I just couldn’t because (as you’ll see below) I found myself repeating too many areas. So the sounds are only generic, but they become very repetitive and agitating. I was almost better off just turning the sound off or having a custom soundtrack that masked the sounds of the game entirely. But did the sounds come off high quality, sure. That may have been the developer’s saving grace was the sheer quality of the repetitive sounds. 3/10 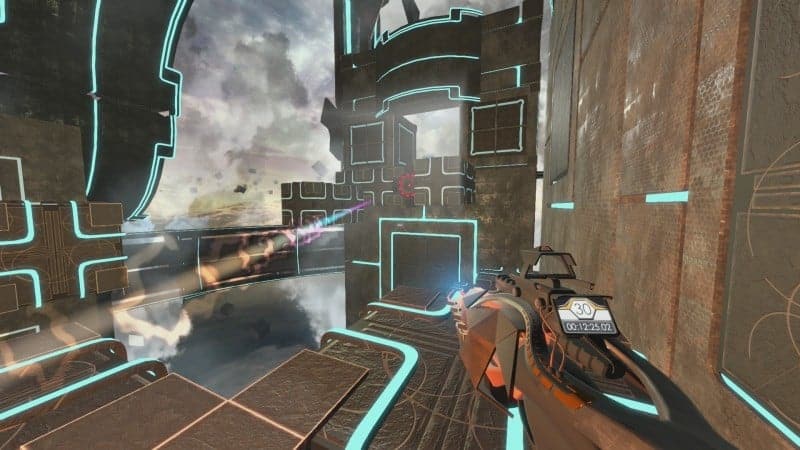 There isn’t one a soundtrack in this game actually. In fact, I was about to remove this section entirely, but then I realized that the lack of soundtrack is something worth mentioning. I do think that a game is okay without a soundtrack. The game has to benefit from there being no soundtrack though. That’s where I think that this game has gone astray. I believe that it would’ve warranted a fun, futuristic, upbeat set of songs. But instead we have a lot of silence with the exception of the sound effects. The creators might thing that it makes more sense to have it just be you and the game and create some sense of realism, but the lack of music only adds to the lack of creativity. If all of the rest of the game had shone brightly, I would then believe that they decided on no music logically, but since the rest of the game seems to fall short, I would believe that the lack of music is more about cutting corners. I’m going to give it a 2 out of 10 only because there are moments where having music would’ve prevented me from hearing a jump pad go off behind me correctly, so that was a sort of smart decision. But if we’re being honest they still could’ve given me music and let me have control over the volume of the music and sound effects. 2/10 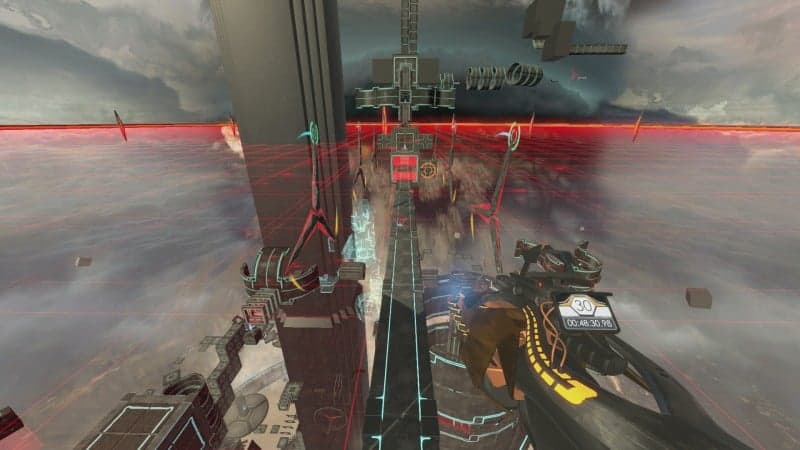 The visuals are about standard for a lower budget game translated from PC. The infinite fog all around you gives an eery sense of hopelessness. But that never is your focal point while in the game, so if you’re playing it right, you’ll probably not care about it. There is just a multitude of rust colors as well as dark grey with highlights, an aestethic that originated around Tron Legacy and I think has been out of trend for the last 5 years now. The gun is the closest object to you at all times and it even looks like an overly glossy item. When in reality that should be the highest definition object as it has information on it as well. The game to me looks as though it could run on PS3 and XBOX 360 easily. However, maybe the size of the levels would make the game difficult to run. But I would’ve understood the short comings of the visuals immediately if I was playing it on a last generation console. 5/10 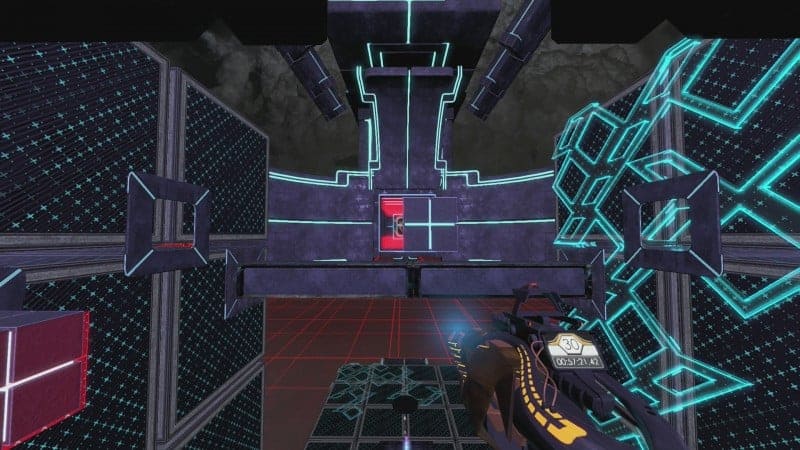 I very much disliked this game for the simple fact that I was always too low to the ground. The sensation of being at least a 5 foot tall individual as you can safely assume that you are in most first person games is out the window. Realistically, you cannot see your body, but from what I can gather, based off of the perspective given, is that the character is only about 1 foot tall. We’re talking 20% of the height of a normal character here. This makes landing on platforms harder than they should be as well as aiming at objects as they get closer to you as you find yourself having to aim higher. This short height combined with a quick run but a slow jump only further confused me. Being small and moving fast gives you a longer distance of a jump and it was absolutely nothing that I ever became used to. In fact, I spent a solid hour getting to the first gun alone. A feat that, if practiced (and why should I have to practice a beginning level) is done within the first 10 minutes. But no, I was so out of sorts, and I struggled for a very long time. And then they only introduced more and more gameplay mechanics. The jump pads, then the jump pads that you have to turn on and off with your gun, then bad guys. The juggling was simply too much for me and I review games for a website!

Now, that is not to say that I didn’t do my research. I found that the sheer difficulty of this game is a fun challenge for folks out there. But those people have got to be the same ones that enjoy games like Dark Souls. I’m not saying that there is anything wrong with that. On the contrary, I applaud and respect them, because they are the audience and the correct demographic for the game. I love first person shooters, I love puzzle solving, and I love platformers, I usually love games that are a mixture of those, like the Portal games. But this one, I simply died too much. I understood the sole mechanics of the game but there is too little forgiveness even from the beginning and there is no learning curve at all. If I can’t learn the game, I can’t be expected to play it. I screamed at the screen more than any game I have come across. I wanted so badly to enjoy it myself after seeing the game be played on Steam, but I’m sure some of you will accept the challenge and love it. But I simply cannot and have to entirely give up on the game just so it wouldn’t slow down my progress that I had to dedicate to other games and reviews. 3/10 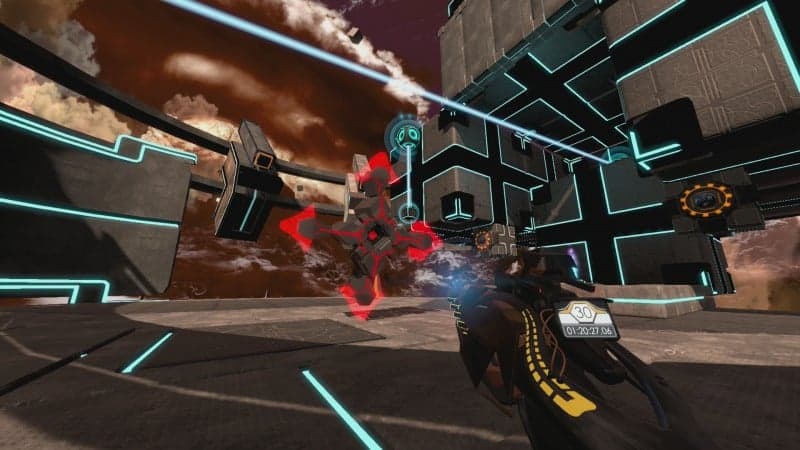 I couldn’t find a single reason why I would want to replay this game. I barely enjoyed going through it in the first place. My only guess is that the people who are speed runners would play through it and learn everything that they could about how to cut time off of the time in a level. However, it is a rather linear game despite appearing to have large open worlds that give you choice. The bottom line is that I saw some collectibles, but it’s almost like they were thrown in just to try to get you to play the game again and make you feel as though there is value. The game is only $7.99 and I feel that you had better wait for a price drop or a sale and then try to get your money’s worth. 1/10 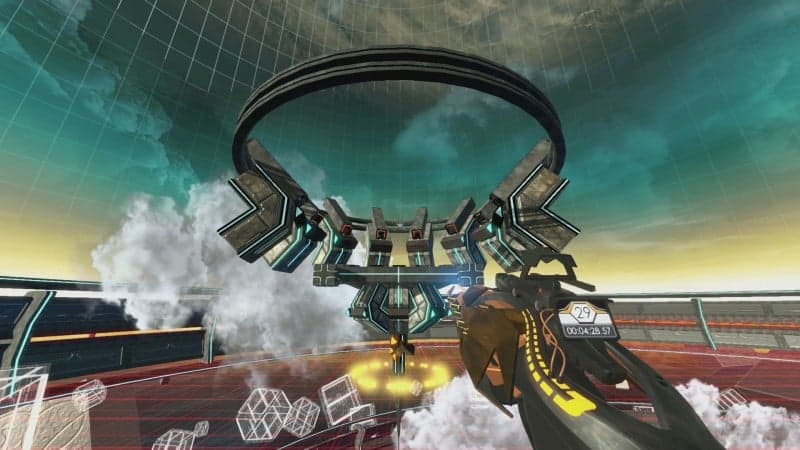 If you’re up to the challenge, you can buy the XBOX One version by clicking here.

If you own a PS4 and would like to see if you can beat it, simply click here. 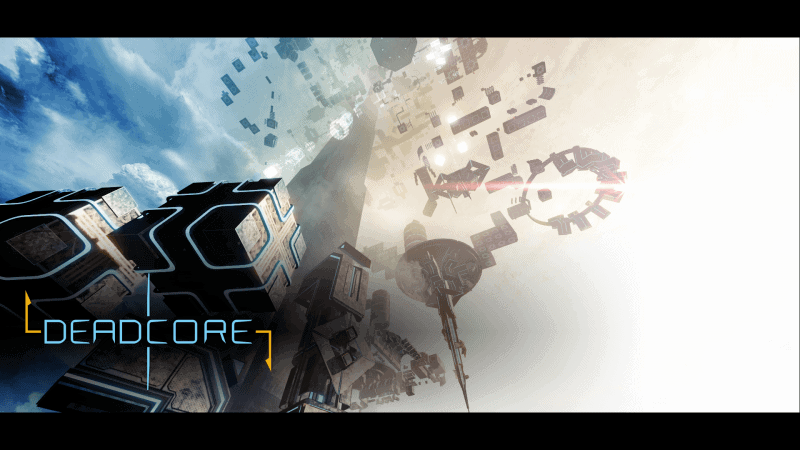