Our Review of Skylar And Plux Adventure on Clover Island

‘Skylar & Plux: Adventure on Clover Island is an enthusiastic revival of the legendary 3D-platformer genre with classic gameplay, playful gadgets, and a lighthearted story set in a gorgeous, colorful world reminiscent of childhood adventures.

Go on an action-packed adventure, collect gadgets to help you explore a beautiful paradise, and save it from destruction. It’s up to Skylar Lynxe, our nimble and courageous heroine, and her trusty sidekick Plux Owlsley, to prevent the villainous CRT from conquering their newfound home and turning it into a wasteland.

Cross the tropical beaches, volcanic caverns, snowy mountain tops, and merciless desert of Clover Island. Fight an army of CRT’s minions, and find powerful upgrades to expand your abilities. Explore the island with the freedom-boosting Jetpack and uncover its mysterious past with the puzzling Time Orb. Are CRT’s turret bots giving you trouble? Grab their missiles and send ’em right back at ’em, turn their own fire against them and send CRT’s minions flying with the powerful Magnetic Glove!

If you miss adventuring like it’s 2001, or just love colorful aesthetics, tasty upbeat music, goofy humor and collecting lots of shiny gems, Skylar & Plux: Adventure on Clover Island is for you!’

You can gather from that description that, without them outright saying it, they want you to feel like you’re playing something similar to a Ratchet and Clank game. Or a Jack and Daxter game. Do they succeed? Not quite, but is that necessarily a bad thing? go into that more in the review. But first, read over the features and watch the two trailers (Yes, two.  It’s because I love you guys)! 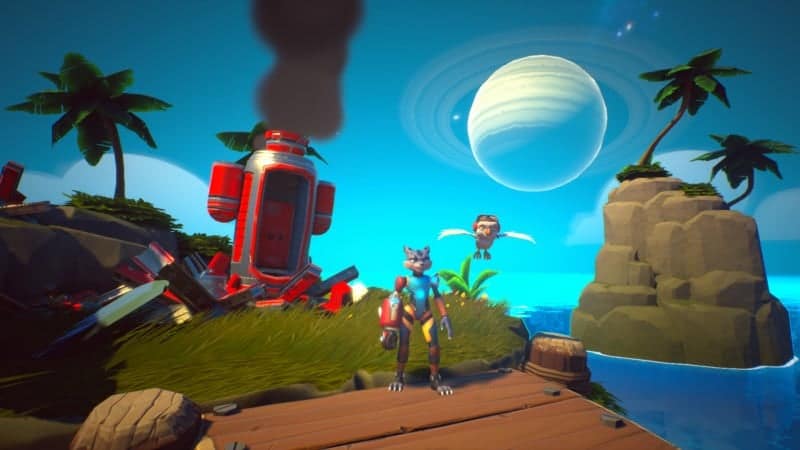 The audio was fun to hear. All of the sound effects were so happy and cheerful when I broke open crates or anything fun. Killing the baddies always sounded so fantastic as well. The voiceovers from CRT and Flux were so well done. They made the dad jokes that were throughout the game a riot to listen to. Kudos to whoever did those voices. The only point about the audio that really bothered me was with one specific sound when using surround sound. Since I reviewed this on my XBOX One and not my computer, I had the surround sound up like I do for all games. The sounded used for when Skylar swings from the orbs that are hanging above, it’s like a buzzing sound, anyway, it just comes out as pure deep bass from the subwoofer.I certainly wouldn’t believe that I was the only one that has experienced that, I hope that they can get around to maybe mixing the sound differently for it.  9/10

The music is pretty damn good in this game. You have overworld music, but when you’re in the game, the music that you hear blends with the environment. In this game, among others, I found that you can have a massive imbalance of sound and music. This game doesn’t clash at all nor does one overtake the other (I know other reviews said otherwise, but again, I’m using surround sound, so I can’t speak to what it sounded like just coming out of stereo). But like I said, the only thing is when there is that loud sound that I mentioned before, it pretty much drowns out the music (but you don’t come across it too terribly often). But yeah, when you’re in the different worlds, you also have music that was different for each world. They didn’t recycle anything, cut corners, or reuse old music. They took their time, you can tell. It’s just a shame that the game is as short as it is, I’d love to see other types of worlds that would require more styles of music on top of the cool sound effects. 10/10

This is the area of the game which definitely strived to get the Ratchet and Clank-esque aspects as close as possible. They have that futuristic, metallic feel to a lot of things. But they also have the whole tropical world thing going on. I really can’t fault them for their look. They even have cutscenes, but I was unsurprised when the cutscenes were just moving pictures with voiceovers. But despite the 2D cutscenes versus the 3D rendered worlds being so different, I still enjoyed the contrast. I think the only downside to the whole thing was simply the fact that in the cutscenes, characters are far more expressive. I think that with the detail that the devs took to make the characters, levels, and atmosphere look so good, they could’ve had a few more facial reactions. All in all, I really like the overall look of this game. It was one of the few things that kept bringing me back to the game.  7/10 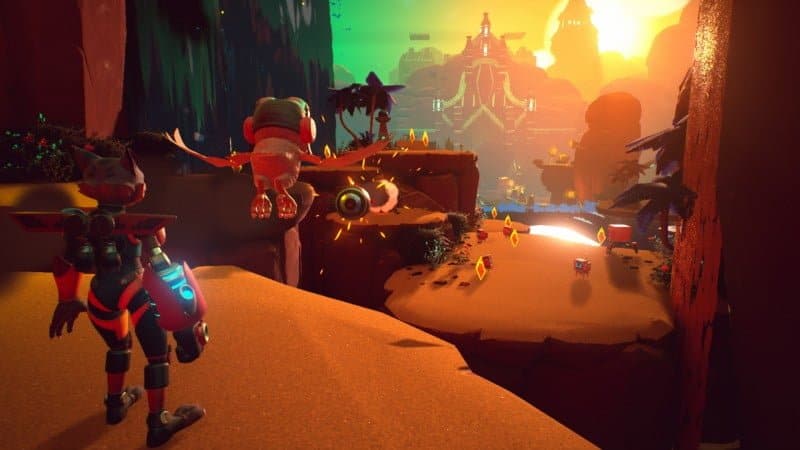 Well, to start this section, I have to state that the initial load time of the game on my XBOX One was nothing short of inappropriate for this day and age. I clocked it at around a minute and 15 seconds. And we’re also talking about every single time that you boot up the game. Now to clarify, the easy way to get around his is just to put your game in standby mode and come back to it whenever you’re ready to play again. I just feel like we shouldn’t have to do that.  Not to mention that the other loading screens are still long at about 20-30 seconds a piece. None of this small rant is exactly relevant to gameplay, but I figured that it would be worth noting since it equates into how much time you’ll actually spend playing the game.

Now as far as the actual gameplay, let’s start with the platforming. The platforming that you do in this game is all that you seem to do in this game. And this game does do it well.  I mean you can have single, double, or even triple jump! That’s almost unheard of in a game, but the caveat to it is I never felt like I needed it. But it was fun to use it when I did. Later on in the game your jetpack helps you jump further as well as controlling the direction of movement in the air. You can increase the amount of hearts that you have at your disposal too by saving the local race on the respective locales. But I never felt a need to have ever increasing hearts because I never felt the difficulty increase to the point of hectic, frenetic craziness. The only way to save the Lo’a (the local race), is to come across cages with them inside and unlock them. The only way to unlock them was to have enough collected crystals. This was the only part of the game that I found to be an actual challenge, until I realized that there were crystals everywhere are crates full of them practically everywhere as well. With the game being so linear as long as I just used my peripherals as I walked, I would see pretty much every crate. Furthermore, once you have enough crystals, there’s no real further incentive to collect these crystals. Once you hit the end of the level, you lose all accrued crystals.

Yes, there are puzzles to solve. All of which I found to be the most fun part of the game that wasn’t part of the primary platforming. However, these puzzles are clearly on the easier side. The whole game seems as though it’s designed to be easy yet fun for multiple ages. My guess is that this was to make the whole nostalgia feeling in younger people who play it so that they remember fondly of beating the game when they were younger. So in that vein, combat does feel easy, which in turn equals repetitive for gamers that crave a challenge. You do unlock the ability to control time to an extent later in the game. It’s not near as robust as games like The Sands of Time, but it has its moments.  All in all, the game averages at about 2.5 hours if you breeze through it, maybe 3 if you find all crates and all of the Lo’a.  5/10 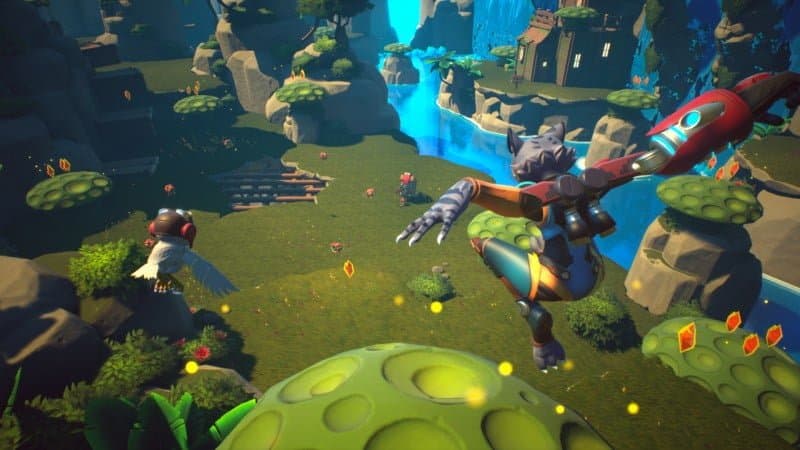 It definitely can be replayed, but since the game is so linear and everything is easy enough to find, I can’t imagine that you’d want to replay it.  Some people do so that they get the most money out of a game, so if playing it 3 times through (at 3 hours a piece) just so that you can justify spending $14.99, then absolutely do that.  For the rest of us, I would say that the game is a one time use, but even at $14.99, it’s quite fun even once through.  If it only had like an increased difficulty for playing through the story again… 6/10 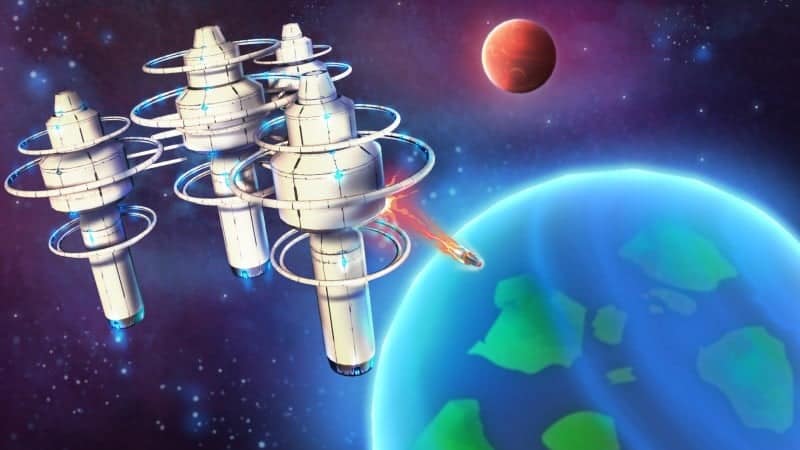 Stay tuned here on Hackinformer.com for more reviews and follow us on @Hackinformer