Yep, today I’m gonna give Senran Kagura Bon Appetit a try. For everyone not knowing the series expect lots and lots of nudity so don’t read this post at works or anywhere else where someone could look on your Screen 😉 As with every Senran Kagura Game we have our heroines who want to fight to protect something, fulfill their wish or just let their kinks go wild. But this time there is a difference. Normally you would run around punching lots of enemies while using your frantic mode to look better and become stronger and finally fight against the last boss.

This is not the case this time though because instead of punching enemies and stripping them of their clothes you will have to play a rhythm game and beat your enemy to proceed further to the final boss. The story revolves around everyone’s favorite heroines getting to know of a cooking festival where if you win you’ll get a secret Ninja scroll which will grant you one wish. This wish can be anything so the heroines don’t hesitate long and decide to take part in the festival.

When you first start the game you are greeted with the main screen where you can adjust a few settings like screen size, language and more. After setting everything up let’s dive directly into the game by starting a new game. Here you’ll be greeted by an introduction to the cooking festival. Once it’s over you’ll land in the Main Menu where you can either choose to play the story of the heroines, play merciless cooking battles in Arcade Mode or freely play with your favorite shinobi in Free Mode. Of course there’s also the well-known Dressing Room but I’ll cover that part later ;). Let’s start the Story.

In this Review I’m gonna have a quick look at Mirai’s Story in Easy Mode. 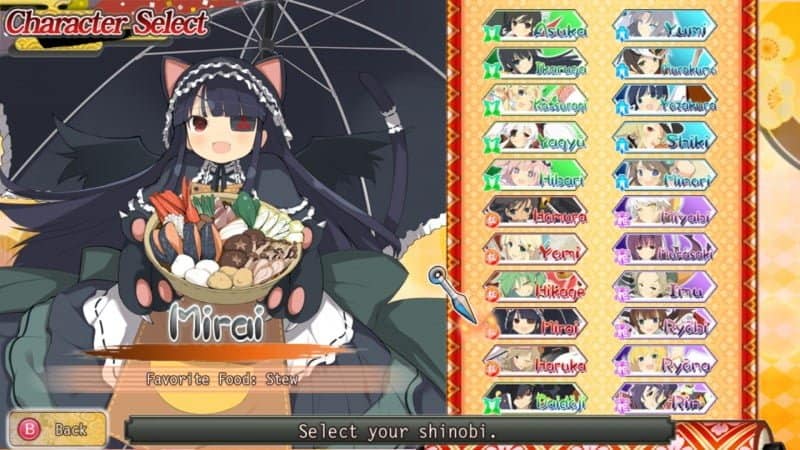 After selecting comes a short introduction and we learn that she doesn’t want to be treated as a child anymore so she decides to take part in the contest to prove that she is a full grown adult. So without further talking lets starts our Battle against Asuka who doesn’t take us seriously. 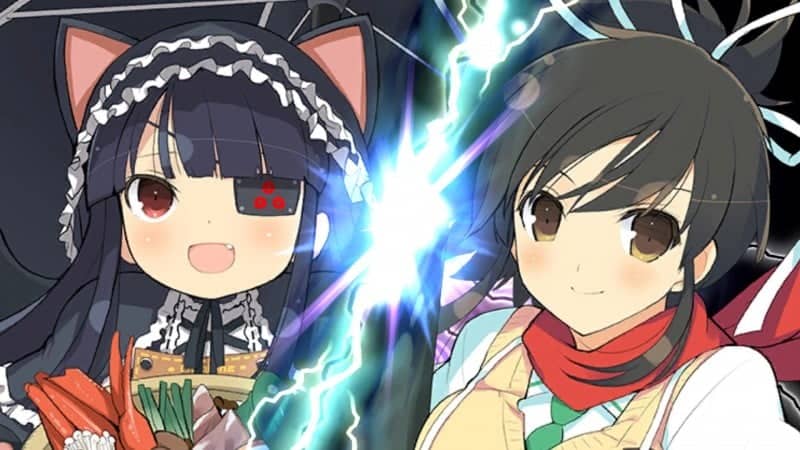 After this I noticed an annoiying problem in the game. The Arrow Keys and A/B/X/Y Keys have the same color. This means that as an example the Arrow left and X Key share the same color and can easily be confused when the song speeds up. I hope that we may get Mods someday which address this or an official Update. As long as this isn’t the case we will have to pay close attention to the Icons though to press the correct key. If you are playing this on an XBOX Controller and are used to playing on an XBOX Controller rhythm games like Osu in Taiko mode, Guitar Hero or the famous Hatsune Miku Project Diva Games you will probably not have any problems with this though ^^. 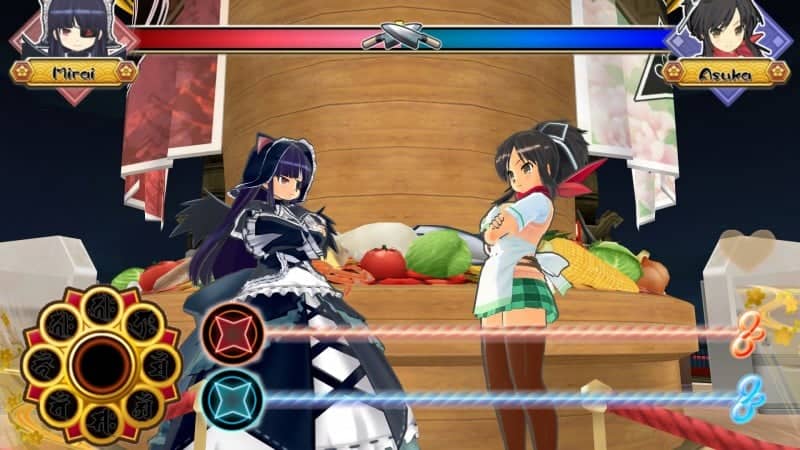 So as said everyone who has experience in Rhythm Games will get used to this fast and easily score 100% and sometimes even without much experience. For me it sadly took a bit to be able to correctly distinguish the Buttons I had to press but once that’s done the real game can begin. It’s your job to press the Buttons at perfect Timing to score points to finish your enemy. One Game always has 3 rounds that you will need to finish. If you win a round your enemy will be stripped of some clothes but beware that the same goes for you. If you want some further Nudity and the Character Specials you will have to score good enough to fill the heart on the right side to get them. When the Heart arrives on the Screen you can just press any Button to activate it and will get a nice viewing angle in the Background and a nice Scene after you finished the final round. After every round will be a taste Test where Hanzo will rate and describe your food if you won or the food of your enemy if she won. Also if you managed to win every round the leftovers of the girls clothes will be completely blown away but don’t worry, there’s still censorship so you won’t see anything 😛 (And no there are no Mods to circumvent this like in the other games  of the series <.<) 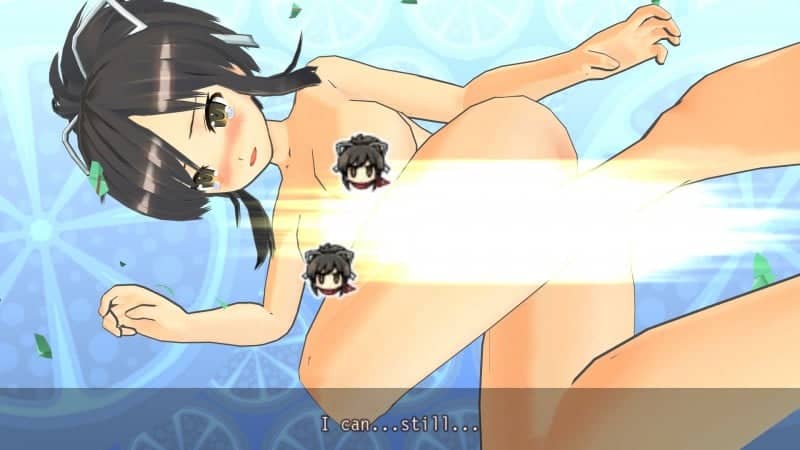 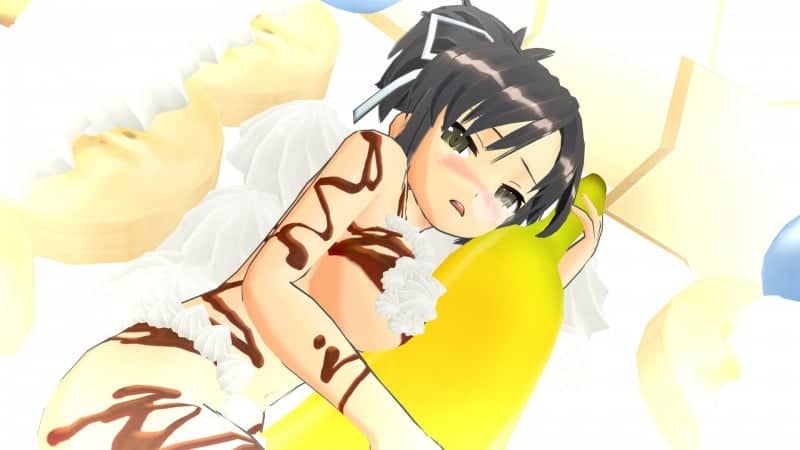 And of course, you can zoom-in and also change the viewing angle of the scene and exit it when you are done looking at it 😉
As you can probably guess you can get such a scene with every Enemy as long as you manage to fill good old Hanzo’s Heart and press any button when the Hear arrives.

When it comes to the Music of the Game, which is a core port of every rhythm game, my impressions are rather split. Some of the music is nice to have as rhythm music while some other are fitting but not particularly good sounding and only very few songs have vocals. But this is just my opinion so other people may like this music more but I would have loved it more if they would have included a few songs that would tempt you to play the game every now and then just for the songs but sadly I didn’t get this feeling.

All in all, though the game is a solid title which can provide you with lots of fun and also quite some challenge if you try playing on harder Difficulty.

Wrap-Up:
Intro/Story score: 3/5; This Game doesn’t have any real Story Line but the Dialogues of the heroines and other characters in the Game with all their Allusions are fun to read if you like dirty jokes.
Gameplay score: 3/5; The Gameplay is ok. Nothing to fancy and the Design choice of the Buttons to press can either help you or make getting into the game pretty hard.
Visual Score: 3/5; Fun to look at but sadly some things like the underwear have a bad texture quality without any antialiasing and even with 8x antialiasing have some artifacts which don’t make them look that good when zoomed to them like in cutscenes.
Audio Score: 3/5; As mentioned the Audio is nothing that gets stuck in your Head and can be annoying to sometimes if you don’t really like the music but that’s my opinion and some people might like it more than I do.
Replay Value: 4/5; Gathering all the items and beating enemies in Hard Difficulty can help with the replayability factor but sadly the sound isn’t part of this. The sound just doesn’t stick in the Head and wants to make you replay the game just for the background music. If someone likes watching Girls getting stripped of their clothing and getting served as a tasty dessert this can give lots of replayability though.
Fun Factor score: 4/5; The Dialogues of the Characters as well as all the allusions can make for lots of fun when liking the Humor and the same goes for the complete Gameplay as long as you like the Humor.

Final Score: 20/30 (6/10); Really funny game and a new approach to the series which I really liked for most parts. The few things that I criticized won’t destroy the overall funny experience though.

Interested in everything Technical. Loves self-repairing Tech. Collector of Firmwares. Enthusiast Gamer and Anime Fan ^^
@Darthsternie
Previous Dash and Switch with MARIO KART 8 DELUXE!
Next PSVita: How to install VHBL bubble on FW3.65