Studio Warm Lamp Games has created a new game called Beholder that definitely packs a punch and, depending on your play style and the choices you make, you will get different endings. Your choices will determine if you make friends or if you will stomp on every characters feelings and only care about yourself and your career. In the game you’re a state-installed landlord in a Totalitarian State. You must spy on tenants, peep, eavesdrop and profile! You must report on anyone capable of plotting subversion against the State. You MUST! But WILL you?

Beholder plays in a grim dystopian future where a totalitarian state controls every aspect of private and public life thus privacy is non existent. You are thrown in this world as a state-installed landlord together with your family and your job: spying on every tenant in your house and reporting every misstep and wrongdoing to the authorities and profiling every person as much as you can. The first thing you see when the game starts is yourself in a bus together with your family being driven to your new house. 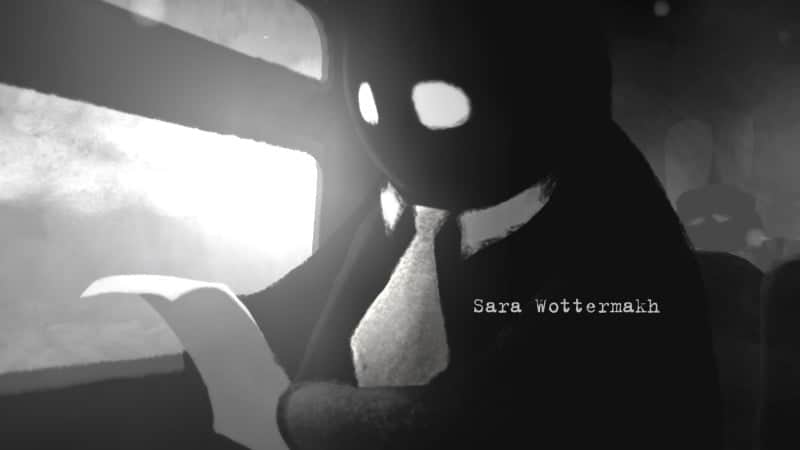 Meanwhile you will also see someone being beaten and escorted out of his house by the police. You are then told that the person escorted out was the previous house manager and that you will end up like him if you don’t do exactly what you’re told. The first day of your job starts by installing two surveillance cameras in the dining room so that you can always spy on people in there. 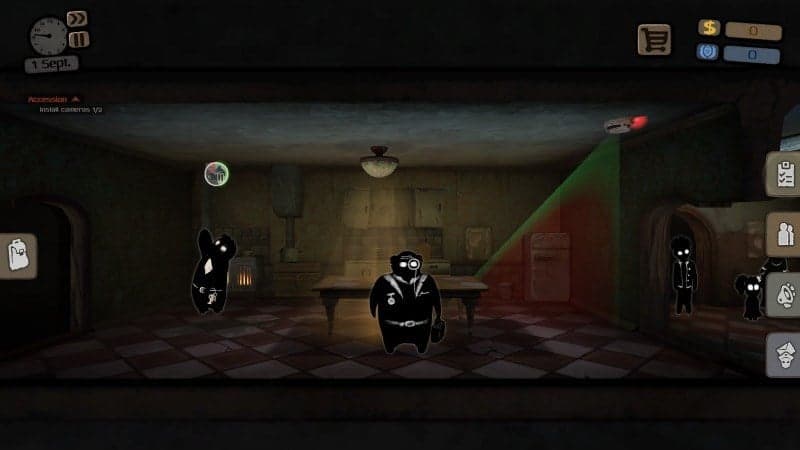 For every task you finish you will get some money and reputation points. The reputation points can later be used to buy more and better security cameras as well as use them to persuade people around you. After your boss is gone you will get a call from the ministry instructing you to spy on Jakob Manishek from apartment number 2. So, next you’ll have to go to apartment number 2 and first knock or maybe spy through the keyhole (this isn’t necessary though as this is the first time and he’s not at home) to check if he’s home and then open the door with your universal key to install a camera in his room and then search the room for items that let you find more information about him. 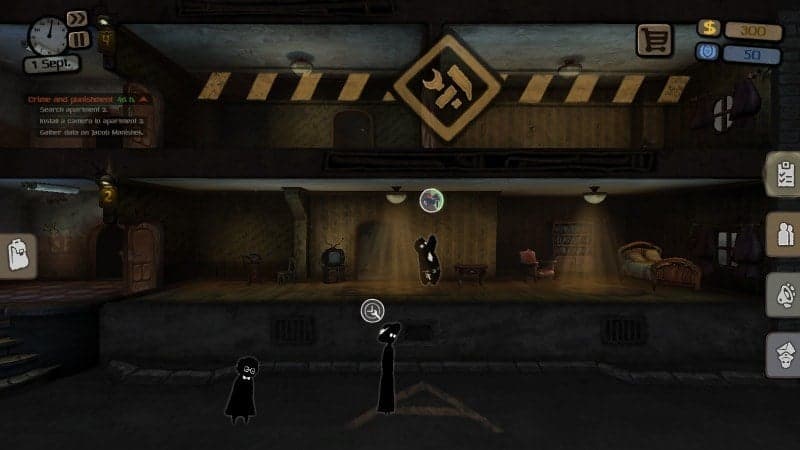 When you’re done with that you’ll have to go back to your telephone and call the ministry to report your task. You will then be given your next task which is that, according to sources, Jakob Manishek is breaking government directives. You will then just have to wait until he returns home and goes into the security camera. When the red icon appears above him you’ll just have to click it to gather the evidence. 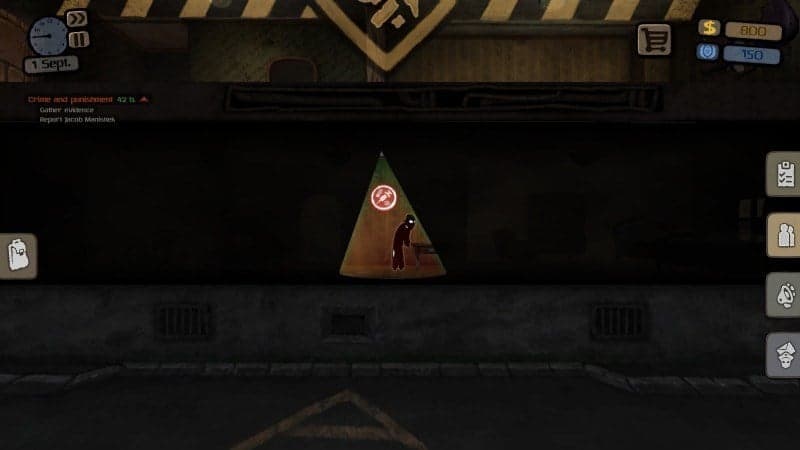 Now that you have your evidence you can file a report but make sure you get everything filed correctly because if not you will get fined. 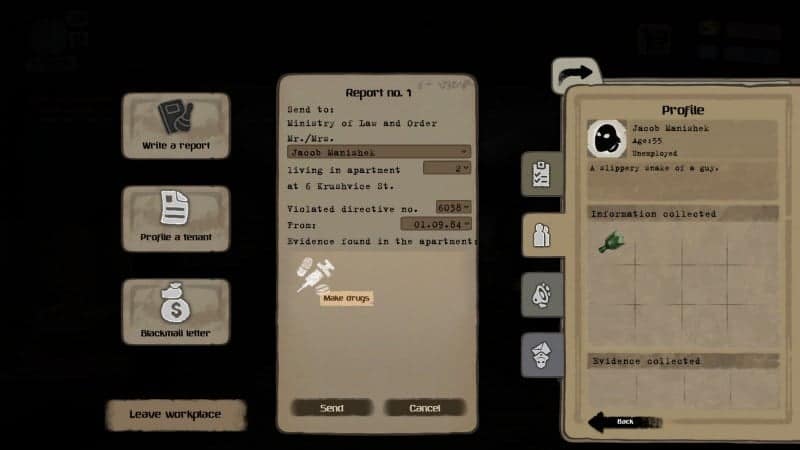 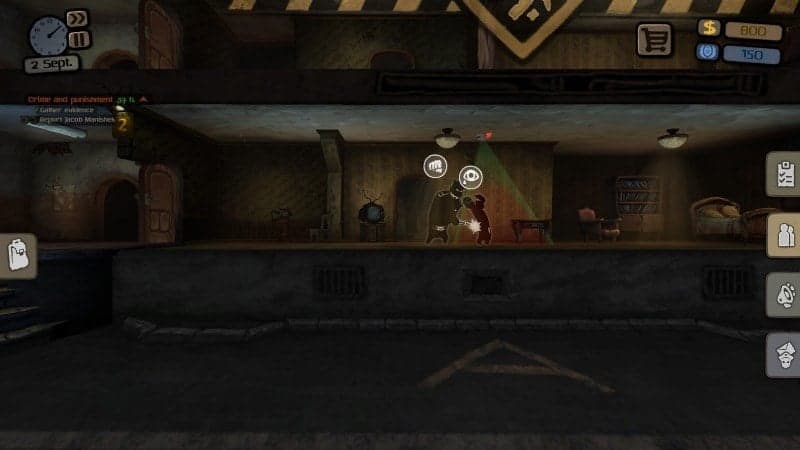 When your report is done and accepted you will see a police car arrive and take Jakob Manishek with them. And with that, the tutorial ends and you are free to do what you want. You will get government tasks every now and then that you will have to follow but you can now choose what you want to do. Will you send the person you have to spy on to jail? Will you help the person or will you blackmail the person with the information you gathered to get some more money? It’s all up to you! Over the course of the game, you will also have to make many important decisions that can change the course of the story completely. This is exactly what I like about this game. It perfectly uses the atmosphere of an always watching totalitarian state that uses people like you to spy on every citizen and if wrongdoing is found send the people to jail. In the story, you have the ability to freely choose how you will care about your people and sometimes you also have to make sacrifices to help the people you love in the game even though you may not want to hurt anyone. If you like games where every decision counts and one that has a good story as well as game mechanics then I would really advise you to give Beholder a try. You can even try a demo before you decide if you want to buy the game 🙂 Also please be aware that this review has been written with a “review beta” of the game so it could be that some new features or things have been added by then 🙂