Rare Nintendo 64DD Disk Drive prototype for the US surfaces! 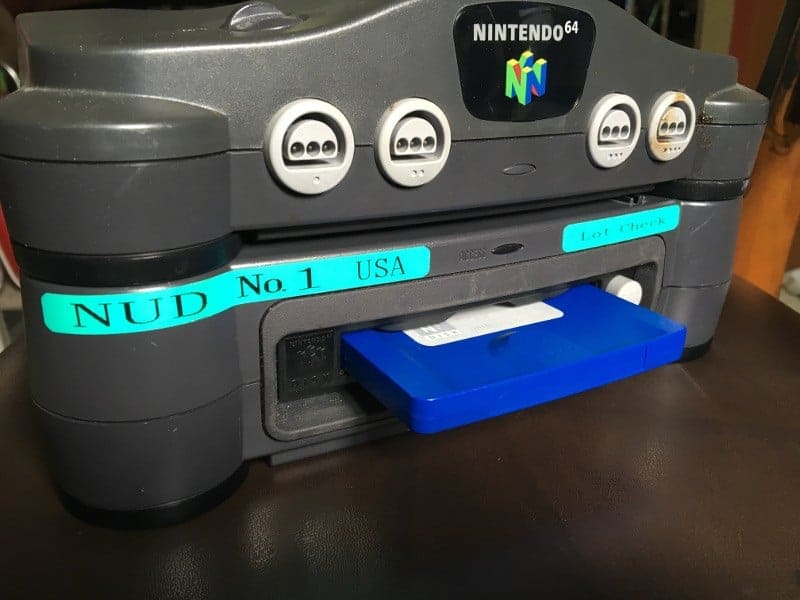 So yet again, I have a bit of odd news from the past come across my desk and this time, it’s for the Nintendo 64! I am of course talking about the Nintendo 64DD Disk Drive.

The 64DD (Japanese: 64DD Hepburn: Rokujūyon Dī Dī), colloquially referred to as the Nintendo 64DD, is a magnetic disk drive peripheral for the Nintendo 64 game console developed by Nintendo. It was originally announced in 1995, prior to the Nintendo 64’s 1996 launch, and after numerous delays was finally released only in Japan on December 1, 1999. Only ten software titles were released until the unit was discontinued in February 2001. It was a commercial failure,with at least 15,000 total units sold and another 85,000 units unsold.

“DD” is short for “disk drive”, and originally “dynamic drive”. Plugging into the extension port on the underside of the console, it allows the Nintendo 64 to use proprietary 64 MB magnetic disks for expanded and rewritable data storage, a real-time clock for persistent game world design, and a standard font and audio library for further storage efficiency. Furthermore, the 64DD’s software titles and hardware accessories let the user create movies, characters, and animations to be used within various games and shared online. The system could connect to the Internet through a now-defunct dedicated online service called Randnet for e-commerce, online gaming, and media sharing.

Now not all of you even know this was a thing let alone still in the wild but it seems that a collector in the Seattle area by the name PostedOval has done just that here is what he said on the forum assemblergames.com.

Hey there, I am a big collector in the Seattle area and I am reaching out to you guys because I can’t find what I am looking for.

I acquired what might be a rather unusual N64 64DD drive. Keep in mind, I live in Seattle where Nintendo of North America resides just 20 minutes away…

Notice anything unusual about this screenshot? Keep in mind, the reason why the picture is soft is because it’s running through a HDMI upscaler…but the picture with English text (instead of Japanese) is legit. This is the prototype for the US version of the 64DD.

Have you seen this before?

This unit also had a N64 blue disc inside, but I don’t know what is on it as the drive just clicks and displays an error message. However, I KNOW that Nintendo of America used this unit and the contents could be anything. This unit also has some usual writing on the front of it that doesn’t look like any third party developer kit I have seen. I was told the label means “Nintendo Ultra Disc unit #1 for the USA”.

I want to know what the contents of that blue disc is. Do you have a recommendation of somebody who could help me out?

Now here are some pics for your eye holes 🙂

Nintendo 64 and the disk drive.
Please use with equipment of 64 marks and 64 disk mark.
Disk and the magnet, please do not approach.

Also if you have around US $2,999.99 burning a hole in your pocket you could try for this Ebay listing.

Now myself as a collector have to pick up my jaw from the floor since i would give a well-loved part of my body for one.

Well, there you are another rare system to wet you collector whistle.

Do it for the love of the game.
Previous Pokémon Go Rant! Where’s the fun at?
Next New browser based MMORPG Naruto game inbound