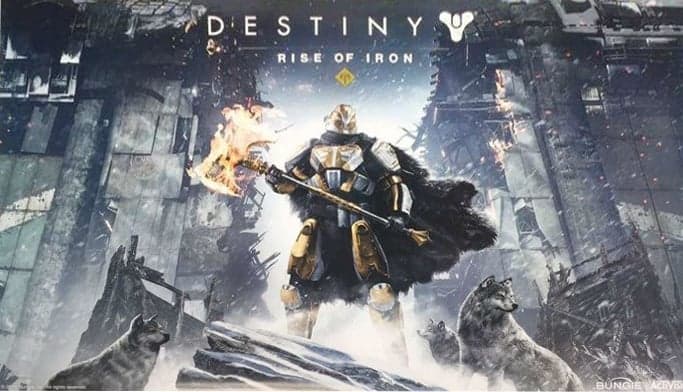 Destiny‘s next expansion as reported by Kotaku (via Reddit), is called Rise of Iron. As seen in the modified artwork obtained by Kotaku below, the illustration shows Lord Saladin gloriously surrounded by a pack of wolves in what looks like Earth’s Cosmodrome, or more specifically according to various forums as the image shows a breach in a metal wall, this could be highlighting a call back to the Battle of Twilight Gap.

Looking over Destiny lore, the Battle of Twilight Gap which was the third major battle that took place on the outskirts of a city, involved the Kell of the Fallen House of King who plotted an attack and capture of the Traveler. The lore goes on to talk about Ana Bray, a hunter descendant from the famous Clovis Bray who led a fire team that most likely reported the incoming invasion of Kell. Lord Saladin Forge who led a team of Guardians with his protoges Zavala and Shaxx to defend a fort, however were eventually overrun. Shaxx however with a squadron of Guardians going against his former mentor Lord Saladin disobeyed orders and drove the Fallen out back to where they came from.

Assuming from the title of the expansion, many people believe that it could possibly focus on the Iron Lords themselves who have had weapon artefacts named after them in the game itself.

“First and foremost we have Lord Saladin. He’s the representative of the Iron Banner. He’s a hero to the City and a legend in his own right […] Who are the Iron Lords? You know them by the names of Iron Banner weapons we use. Jolder, Skorri, Felwinter, Timur etc. In the Grimoire they’re described as ancient warriors who were there to defend the City when it was founded.”

The new expansion is going to feature a new raid and is expected to have the same amount of content like last year’s The Taken King. According to Kotaku, the Rise of Iron‘s raid will supposedly be based on the raid which was meant to feature in the previous years supposed unfinished House of Wolves DLC, as they could not get it finished in time of the release. This has been a long wait considering The Taken King was released September 2015, so that’s a full year of repetitive grinding.

Destiny: Rise of Iron expansion has however been confirmed for a release later this year around fall time, presumably September. No doubt there will be more information regarding the new expansion June this year at E3.

I like to get everyone the right info and I like to help others get the most from there electronic devices. I enjoy playful cleverness and the exploration of technology. My Motto: You own it, you can do whatever you want with it.
@HackInformer
Previous Tower of Samsara, A Kickstarter we should all get behind!!
Next Steam running on the PS4 with Arch Linux