Ah, memories of past adventures. It is always good to remember the past adventures. However, a new one is on the way. Finally, Uncharted 4: A Thief’s End is upon us. The final chapter in the Uncharted franchise is here. Does it hold up as past predecessors, does it surpass it, or does it fail to deliver the ending that Uncharted and Nathan Drake deserves? Let’s take a look.

Warning/Disclosure: I received an early copy of the game. The release date is May 10, 2016. There may or may not be potential spoilers in this review. I will do my best to keep it to a minimal (my subjective view on spoilers could be completely different than you, the reader.) In addition, all screenshots in this review (besides the box art) are my own. I took them as I played the game. That being said, carry on reading if you wish. If you wish to skip spoilers, scroll straight down to the summary and score.  I will input a few line breaks here and a solid line to give you that chance. 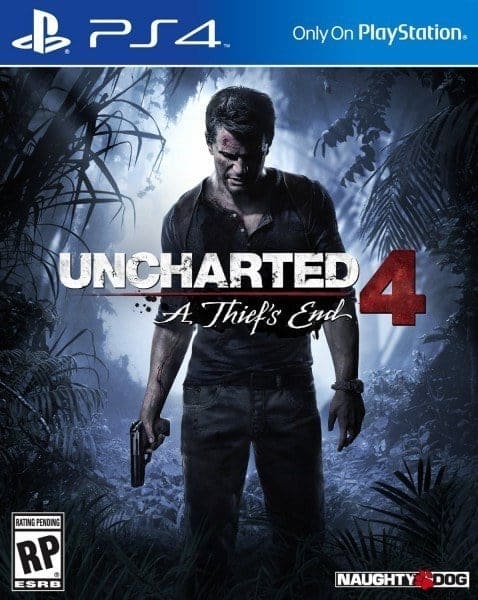 Uncharted 4 picks up several years after the events of Uncharted 3. For those who remember Uncharted 3, at the end, Nate gives Elena a ring proposing to her. They now are married and doing an attempt to live a “Normal life”

Nate is no longer a treasure hunter. He as a day job of being a diver for a company that salvages items from the water.  He works with his new bud Jameson.

His bud Jameson tries to convince Nate to take on this illegal job in Malaysia for diving. However, Nate attempting to live this “Normal” life says he wants to do things by the books and constantly denies it.

Eventually, Nate goes home to his wife, they talk about it, he sleeps on it. The next day, Samuel Drake (Nate’s Brother) arrives at Nate’s job to tell him about some spoiler stuff I won’t write here. This forces Nate to come out of retirement one more time to help his brother.  Outside of screenshots, this is where I will stop talking about the story and go into mechanics. Only spoiler stuff I would say to expect is the screenshots, which avoid all story things and more visual environments.

In typical Uncharted fashion, Uncharted 4 has the exact same controls as previous games. L2 – aim, R2 – Shoot, Triangle – counter, Square  – punch, O – roll, X – jump/climb, Left Stick – movement, Right Stick – Camera Control,  and L1 is to throw your projectiles (Grenades/Dynamite). In addition to the same controls, is the addition of R1. The R1 button this time around uses the new tool and mechanic for Drake, the Grappling hook. 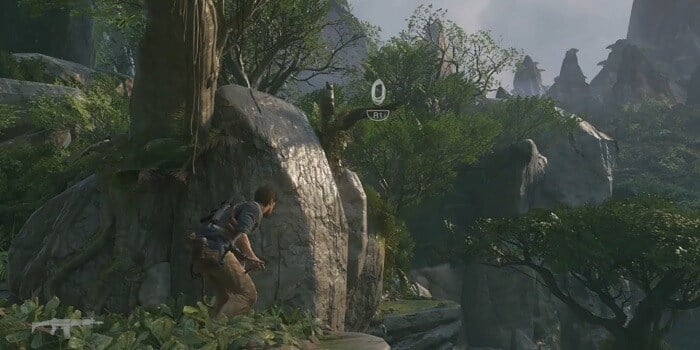 For those who played the Uncharted 4 beta, it operates the exact same way. For those who did not play the beta, there are areas you can grapple on (see above screenshot) indicated by R1. You can hook yourself to these areas and swing to new areas, or use them as a way to take down enemies. In addition to this, if you hold R! for a few seconds then press square, you can use it as a melee weapon, which is pretty powerful. This adds a new way to take out enemies. Speaking of which, for those who felt disdain in the sheer amount of bad guys you had to kill in Uncharted 3 ( honestly felt like a shooting gallery at times, especially towards the end) Uncharted 4 does not have as many dudes as 3. If it did, they are well paced and separated apart so you won’t feel as if you are in a shooting gallery. I feel it is rather well done.  So how does all this mix and mash together?

Combat wise, the game feels tighter than past games. It is done wonderfully and flows smoothly. You can punch, counter, and shoot enemies to your heart’s content without any issues and done very smoothly without any issues. Whatever issues were in the past, they fixed and tightened it. The game flows very well.

Exploration wise ( driving, running, and everything else outside combat) is also done wonderfully. With except to 2 moments in the game where the frames dropped (near end game), it runs smoothly at or near 30 FPS. However, the developers at Naughty Dog had to do some magic I feel. The game may run at 30 FPS, however, it does not even feel 30. It feels above it. The game is well done masterfully. Everything has been tightened up for this game and it shows.

As of this writing, the multiplayer component is not live yet. I cannot test it. However, I did enjoy the beta quite a bit, and if this was the same as the beta, it should be good, to say the least. I will update this portion in gameplay and adjust my score accordingly after I have some time with it.

Above is just a small sample of what to expect visually. Uncharted always delivers on the visual front. This game is no exception. It is very beautiful in all areas of the game. No matter you are driving, climbing things, exploring items, looking for treasures, or just fighting dudes, the game delivers in terms of visuals. It looks impressive on ALL levels. It is very much eye candy and visually appetizing. Even the visuals of the character models are fantastic. The team at Naughty Dog did wonderful motion capture in this game. You can see every emotion on the characters as they speak, are tired, or whatever they do. It is very satisfying.

The audio in this game is top notch. From Voice actors (All voice actors from past games that return are the same voice actor) to musical scores, It is well done. A newcomer to the franchise, Troy Baker does a good job voicing Samuel Drake.  Nolan North returns as Nathan Drake and in my opinion, this was his best performance from all the Uncharted games. The emotions that North puts into his performance sound and feels very authentic. Add this to the wonderful motion and facial caption, it delivers a hell of a performance.

As previous games, you will find yourself going back to find treasure. In addition, you have the multiplayer component. This game will have you coming back for quite some time. If multiplayer is not your thing, then It could be an issue for you.

Uncharted 4: A Thief’s End delivers a wonderful performance from a very competent development team. Hats off to Naughty Dog for delivering the best experience I have had on PS4 this year up to date. It may be the best experience  (gameplay-wise at least) I had since MGSV. I enjoyed the game from beginning to end. Previous Uncharted games I usually do not replay, but this game was so well done and executed so masterfully, I will be aiming to get a platinum trophy on the game.  Uncharted had 5 entries (if you include the vita game) and I would say this is the best Uncharted game up to date. If this is truly the final game, it is a wonderful send-off. Hats off to you Naughty Dog.

Now excuse me, I am off in my treasuring hunting for a legendary platinum trophy.

A gamer and jack of all trades. I enjoy many things, but overall just enjoying life. Hopefully, I can add enjoyment to your life through my articles or interactions.
@mgs2master2
Previous ipega controller review for Android & iPhone
Next Nioh what’s it about?