There been a lot going on in the WiiU scene lately from updates on the Homebrew channel and speak peaks of another kernel exploit working. Yesterday, developer smealum released his iosuhax for the WiiU, now everyone should know him from the 3DS scene for his Ninjahax and more. 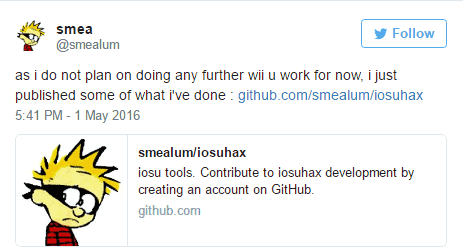 This repo contains some of the tools I wrote when working on the wii u. iosuhax is essentially a set of patches for IOSU which provides extra features which can be useful for developers. I’m releasing this because I haven’t really touched it since the beginning of January and don’t plan on getting back to it.

iosuhax does not contain any exploits or information about vulns o anything. just a custom firmware kind of thing.

I wrote all the code here but iosuhax would not have been possible without the support of plutoo, yellows8, naehrwert and derrek.

Honestly, I don’t even remember all the details so anyone who’s serious about using this will probably have to ask me for help if they can’t figure it out, but the gist of it is :

might be missing some steps, especially for building wupserver. you’re going to need devkitarm and latest armips (built from armips git probably, pretty sure this relies on some new features I asked Kingcom to add (blame nintendo for doing big endian arm)).

also, fair warning : do NOT blindly use this. read the patches. running this with the wrong options enabled can/will brick your console. this release is oriented towards devs, not end users.