Review of Corpse Party for PC

First, people will most likely know this game from the PSP, PSVita or 3DS but this isn’t a remake of the PSP, Vita or 3DS version: Corpse Party Blood Covered – Repeated Fear but a remake of Corpse Party: Rebuild which in itself is a remake of the original NEC PC-98 game.This means it does not include the extra chapters that 5pb made and therefore can’t be used. The game is missing CGs like the ones used in the PSP Version but it features a new version of the “Tooth” Story of Book of Shadows and Wrong Endings exclusive to this version. The Game is using a nostalgic 16Bit style for the graphics and remastered versions of the original soundtracks.

In Corpse Party, you perform a charm with your friends at school that should keep you together forever. This ends up to be a bad idea and they are brought to a school called “Heavenly Host Elementary” which is located in another universe in which they are now trapped apart from each other. You start the game looking for your friends who are also trapped inside the school and get to know more about the cursed school: finding hints, papers, notes, information about the girl in red clothes and more. You are often confronted with choices to do something which will either give you a bad ending or let you continue the story to achieve the true ending. Pretty much every character in the game is a nice person and you can’t really hate them except for one guy but you’ll see what I mean when you meet him^^.

Now for the first run. You are greeted by the Title screen and will most likely want to look through the settings and change the screen resolution so that it fits your resolution and also set it fullscreen. Even though it is recommended to stick with a 4:3 resolution like 1024×768 in windowed mode as this is the games original aspect ratio, you may do as you please. After that, you can directly start with chapter 1 and dive into the game. The controls are actually pretty self-explanatory and you can always just use an XBOX360 Controller too.

If you already played the PSP/PSVita or 3DS version you will probably notice the differences in the character designs. 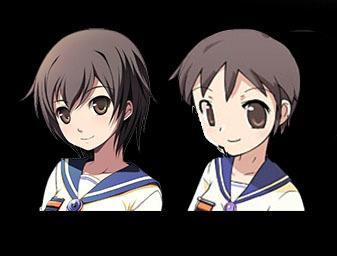 The character designs aren’t bugging me too much even though having the 5pb character designs would have been awesome. According to a developer they thought about it but it just wasn’t possible. So maybe we will see a mod replacing the character design somewhere in the future but take this with a grain of salt because maybe there’ll never be a mod that replaces the character designs. Oh and this is by far one of the nicest CGs in that game. They made a horror game with horrible situations even more grotesque and easier to imagine. So having them would surely make this game a bit more scary but you can’t have everything in life ^^

But now for the good things. As mention before this game features a few more endings and scenes not present in the PSP version. They’re mostly bad endings but because I haven’t played through the complete game yet I don’t know all of them yet. The one thing I like though is the “Tooth” ending from the sequel Corpse Party: Book of Shadows which is a nice little extra. Also, every chapter is available to be played from the start. I much rather like to start games with the beginning but if people want to look ahead and spoiler themselves of everything then go ahead.