The GPD WIN Intel Z8550 is a project being funded on Indiegogo and finished its goal some time ago. It is being advertised as a Laptop fitting in your pocket and being the first 5,5 Inch Handheld/PC Gaming Console with Windows 10. Even though being advertised as Gaming Console you won’t be able to play Games featuring High-resolution graphics or effects but it will be powerful enough to let you play Indie Games, use Emulators for as example the PS1 or play older PC Games. 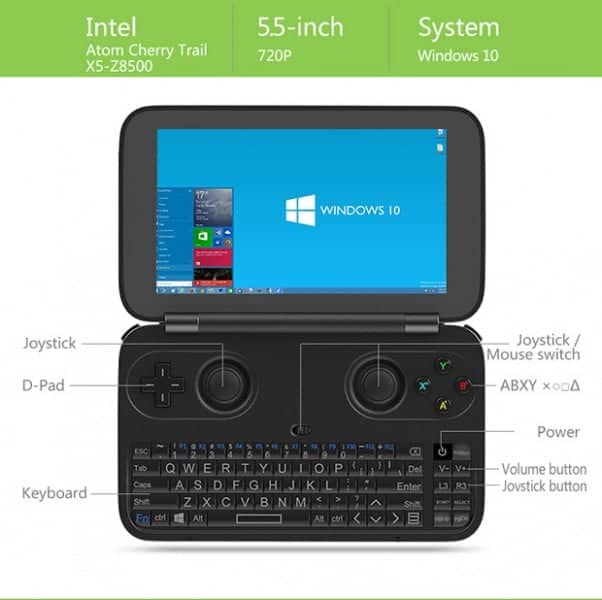 Most will probably think: How will I be able to play on a 5.5 Inch Device? Well, they thought about that too. The Device features a normal Keyboard but also Controller Buttons and Joysticks so that you will be able to play as if you were playing with an XBOX 360 Controller or PS3 Controller. The Screen is a 5.5 Inch Display with a resolution of 1280 x 720 with 267 PPI (Pixel per Inch), touch support and powered by the Intel Atom X5-Z8550 (Yes the Picture says X5-Z8500 but they updated the Indiegogo Page explaining that they will use the Intel Atom X5-Z8550 instead of the X5-Z8500) with Intel HD Graphics of 200MHz Base frequency and 600MHz Pulse Frequency, 4GB LPDDR3 1600 RAM and a 64GB eMMC 4.51 Chip. As said earlier the GPD WIN is running Windows 10 Home and is ready to use so you won’t need to buy a key for Windows 10 Home to use it.

You can switch between the build in Buttons or Mouse by just flipping the Switch in the middle of the Device and start gaming with the Buttons or use the Mouse feature again. 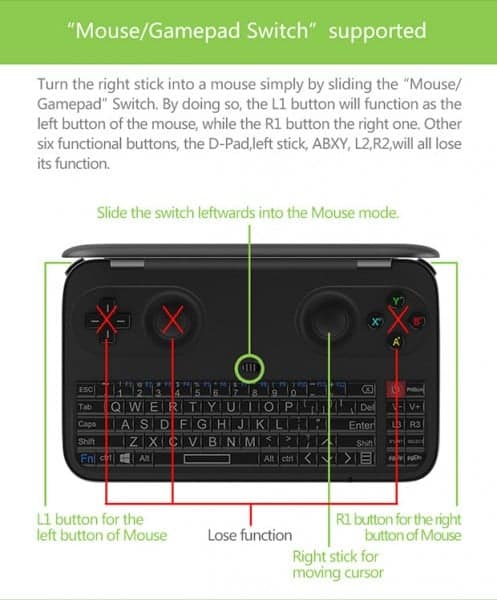 The Device also features a big 6000mAH Battery which is expected to allow for 80 hours of music playing, 8 hours of watching online videos, 6-8 hours of gaming or a standby time of around 672 hours. This is actually pretty nice for a tiny PC (My Laptop is empty after just two hours of using it in lowest brightness and Battery Saving^^) so you can watch a lot of stuff or play games before needing to charge it again +  it features fast charging so it will also charge the battery pretty quick.
On the back, the device has its micro USB charging port and 1 USB3.0 Type A Slot. Also on board is micro HDMI so you will only need a Micro HDMI to HDMI Converter and you will be able to . The TFCard Slot is also on the back of the device and supports up to 128GB and the earphone plug so that you can use your headphones with the device. 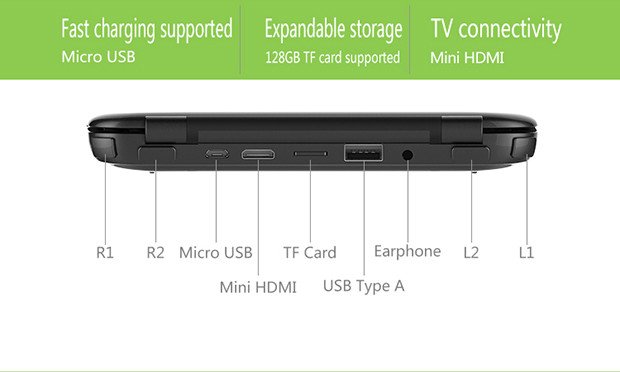 To top things of it features Bluetooth 4.1 and Dual Channel Wifi with 2,4 and 5GHz support and supporting 802.11b/g/n and 802.11a. sadly no 802.11ac. If you want a list of the full specs of this device visit the Indiegogo Page and scroll to the Bottom to find a full list of all the Specs and features.

So if you got excited to buy this Device you can still support them on Indiegogo for a few days and get the GPD WIN Intel Z8550 for a lower price and get it before other people get it. According to their Information shipping will begin October this year. I think that this is actually pretty cool for an idea and if you just want to play some older games or use emulators while being on the go or just want a tiny transportable Laptop this is definitely worth looking into.