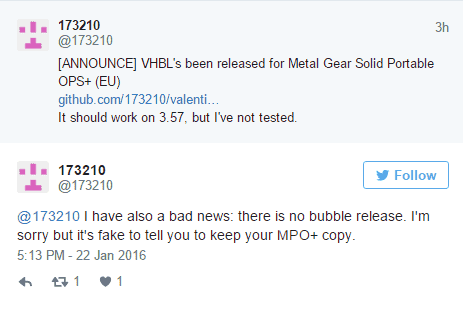 So if you bought this exploit and were little upset that it didn’t happen, today just goes to show you the 173210 doesn’t give up that easy and released the exploit found by @ABCanG1015 as he was hoping this exploit would work but didn’t. Now like it says in the tweet below it should work for 3.57FW but no one has tested it yet.

Now when it come to the bubbles there no need to worry as the pboot hack still works  for homebrew and emulator bubbles. Once you install Vitaftp you can even make your own VHBL bubble too, so if you like to know how to make your own custom bubbles check out our guide on them here.