If you recall last year a group of hacker named the Lizard Squad made Christmas not so fun for gamer as they shut down PlayStation and Xbox online services. The attack last year lasted 3 days, so PlayStation and Xbox gamers couldn’t get online to play their new systems or games they got. Now this year it looks like a new group named Phantom Squad is threatening to do the same thing. 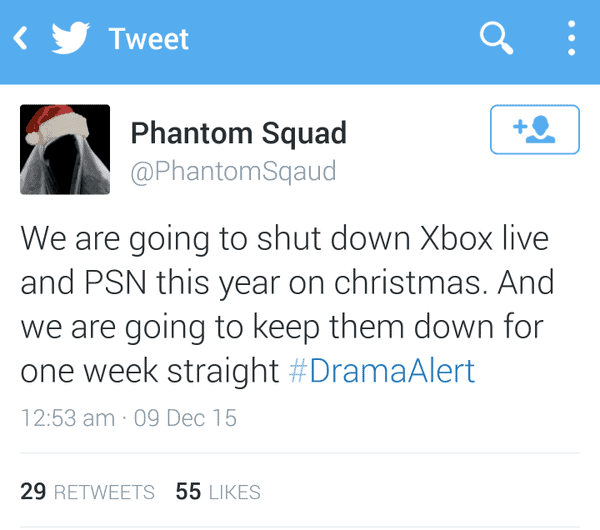 This time they are threatening to keep it down for a whole week and if you remember last years attack only lasted 3 days thanks to Kim Dotcom as he offered the Lizard Squad a lifetime worth of premium Mega vouchers to end the attack. So he and everyone else could enjoy their PlayStation and Xbox Christmas gifts.

Warning @Sony & @Microsoft. You had 1 year to upgrade your networks. If Lizard Squad takes down PSN & XBOX this Xmas, we'll be pissed! RT!

Now all we can do is hope that PlayStation and Xbox have learned from last years attack and won’t let it happen again.

I like to get everyone the right info and I like to help others get the most from there electronic devices. I enjoy playful cleverness and the exploration of technology. My Motto: You own it, you can do whatever you want with it.
@HackInformer
Previous How to get GameStop & Amazon gift cards for Free, Well kind of Free
Next Bloodborne Review: Need an adrenaline rush??