Good day everyone! I recently had the chance to interview the creator of  JetTurtle for Android. I felt this would be a good post for our readers since TG, as a 19 year old computer science student and programmer with his eye on the future, has a lot to share with you. 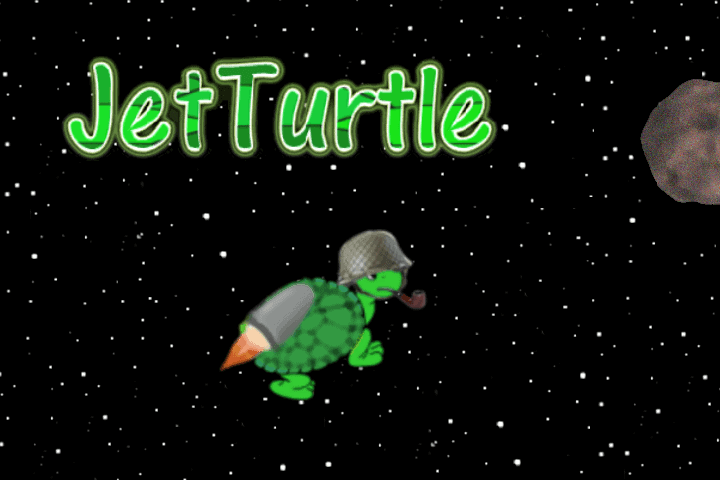 The goal of his game, JetTurtle, is to fly through space as you try to dodge asteroids. Passing each asteroid will increase your score by 1. If you hit an asteroid, you must start the game over. In addition, if you fly ‘off the screen’ by flying too high or too low, you will enter the ‘radiation zone’ and you will only have a few seconds to fly back on screen before losing the game.

1) What made you want to program games?

I mostly focus on writing larger software for the PC and wanted to take some time out to develop my first “real” mobile game for a change. It’s something I’ve always wanted to do but really hadn’t found the time to do it until recently.

2) What has been some of your biggest influences in gaming?

Believe it or not, one of the biggest influences to me in gaming is probably still the original Pokemon games from my childhood. A lot of people think that the Pokemon games is about just a bunch of cartoons on the screen battling each other with fake moves. But if you delve deeper and analyze the story line you’ll notice there’s a lot of strategy involved and the plot line is pretty sophisticated for what looks like such a “simple” game. It’s still probably the most enjoyable RPG games I’ve played throughout the years of my gaming and there are a lot of characteristics regarding the plot and gameplay that I think developers could use to learn from and incorporate into their own games.

3) What’s the back story of your new game JetTurtle? 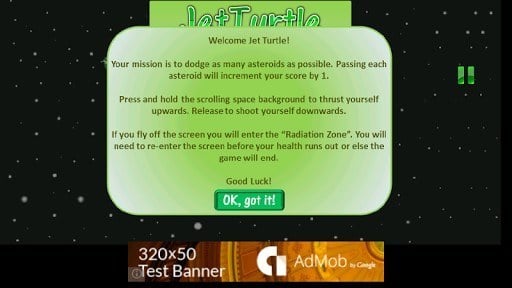 I had just got into writing games for the Android and was trying to think of some good ideas to base a game on. With mobile devices really taking off within the past few years, the ability to make and play games with complex graphics, effects, plot lines, etc on pocket devices has increased rapidly. But I kinda missed the old days of games that were fairly simple but yet had the ability to draw you in and keep you playing for hours based on complexity alone (even if it is just mastering touch sensitivity of controls). I thought back on my days of playing the infamous ‘helicopter’ flash game for hours on end on the web. Around this time, Flappy Bird was really taking off and it was hard to find someone who didn’t have this game installed on their phone. I thought, “This game doesn’t have a complex plot line or game play but yet its taking off like crazy”. I really thought this had to do with the sheer complexity of mastering the controls – so I began to think of a game that I could develop that would be fun but would incorporate that quality as well. That’s when I came up with the idea of JetTurtle. At the same time, I wanted the main character to be memorable. That’s why I came up with “JetTurtle“, a turtle that bears a jet pack, a cigar, and an old war helmet to get him through space haha. A turtle “blasting” through space seemed a bit silly and ironic since turtles are known to be “slow” – so I thought this would be a perfect character for the game. 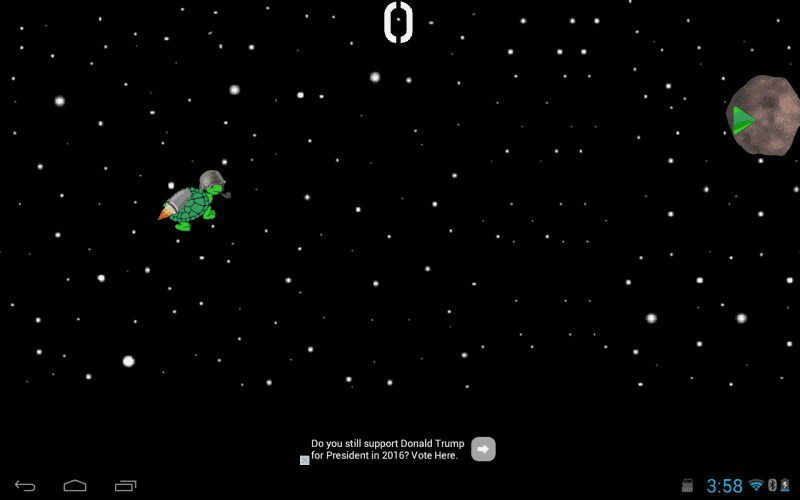 4) What did you find to be the most challenging aspect of programming for the Android platform?

Due to the “openness” of the platform, programming for it is in my opinion much easier than programming for the iOS platform (due to all of Apple’s protocols that you have to follow). However, I’d have to say that one particularly time-consuming part of developing for the Android platform is testing. It was very common while coding JetTurtle to need to test certain parts of the game many times within a small period of time to test the timing of things. Each time you test something, depending on the emulator you are using to test, you can wait anywhere from several seconds to minutes for the emulator to start up the new copy of the game. This small amount of time can really start to add up over time and impact development time. A tip for aspiring Android devs though: if you are looking for a fast and reliable android emulator I would go with genymotion (here).

5) What are a few of your favorite games?

Call of Duty and Halo are a few of my favorite game series. I also really enjoyed Star Wars Battlefront and Battlefront 2, and am glad that Dice is finally working on a sequel to the Battlefront series that will be released this November. Some of my favorites for portable gaming are Mario Kart, Super Smash Bros, and any of the Pokemon games (yes… older kids can still play Pokemon :P)

6) What systems would you like to develop for in the future?

I might get into developing for the iOS platform. I haven’t gotten into it yet because the subscription is $100 per year. I’d also need to purchase a mac to run the development software as it doesn’t run on windows, so I’m saving up some money first 🙂 I also hope to purchase a Google Glass at some point as I think some pretty cool apps could be written for it.

7) Are you working on another game at the moment.

I’ve taken a little bit of break recently from developing games because I’ve been interested lately in the field of Artificial Intelligence (specifically object recognition). It’s a field that has received a huge amount of attention from some of the largest corporations and universities around the globe but is still in its earliest stages of development which is pretty intriguing. I probably will be developing another game soon though. I’d like to work on a sequel to JetTurtle that has a more complex plot line. I’d like to see how people respond to the first game first though before I move on. This is a one-man development team at the moment, as I add more individuals you can expect to see more fun and exciting games from TGGames in the future 🙂

8) Where do you see gaming going in the coming years?

Due to the exponential rate that developments in technology have been following in general, I think this may be hard to predict. However, I do think we have entered the age where people will start to become increasingly bored with the “conventional” way of gaming with a TV set and a controller and want to shift more into experience gaming more in “3D” environments. Because of this, devices such as the Oculus Rift and the Hololens will become exponentially more popular. I wouldn’t be surprised at all to see devices within the next 5-10 years that can completely immerse individuals in a 3D environment and even provide fake sensory information that hasn’t even been achieved by current devices – such as touch, and even smells to really make the whole experience feel extremely realistic. Imagine running around and you’re in a fake Halo map and explosions are going on all around you, you’re fighting aliens, and you can even engage in real hand to hand combat with them and it feels real – these are some of the things I definitely see happening in the coming years and the gaming world’s evolution is going to definitely be exciting, to say the least. For right now, though, I’m looking forward to when consoles include support for 4K resolutions.

9) What do you think of new devices like the Oculus Rift, Microsoft Hololens, and Google Glass for gaming?

They’re all pretty slick devices! Because of the rapid way that technology and gaming is increasing, I definitely see devices such as the Rift and Hololens inheriting more of an active role in the lives of gamers. I also wouldn’t be surprised to see the extinction of the traditional way that we play games right now using a TV, a game console, and a controller because of the increasing advancements in virtual reality. I don’t see the Google Glass becoming as big as products such as the Rift and Hololens in the gaming world. However, I do think think the Glass has the potential to make a huge impact in other fields such as medical and military.

I enjoyed getting interviewed and being able to share my game and thoughts with the readers. Making a game for a handheld device is definitely a fun and creative learning process that everyone should try to do. Nowadays, with tools such as stencyl (here) there’s no reason for those who don’t even know how to code to not have the experience of making games. It’s a rewarding project and who knows – your game might even be the next viral hit 🙂 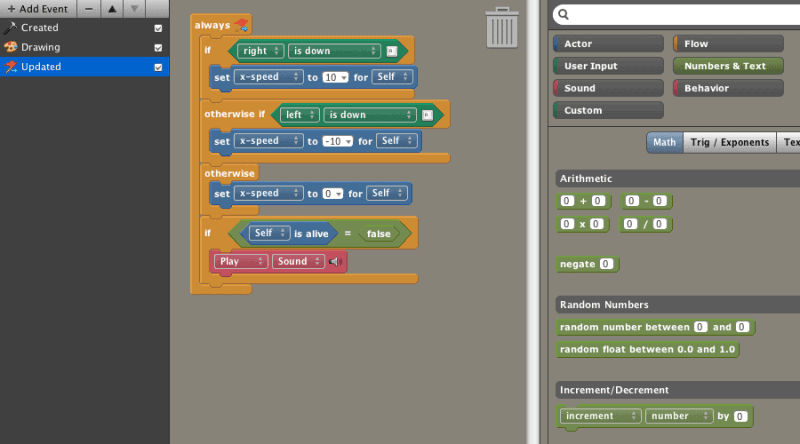 Well, I hope this little interview has inspired some of you guys to try and make a game yourself. I know I will!

I want to thank TG for taking the time to talk with us and of course you for reading! As always, remember to keep doing it for the love of the game!!

Do it for the love of the game.
Previous Megadimension Neptunia VII US Edition coming to the PS4!
Next Name of the game!