Name of the game!

It seems Housemarque is at it once again. They are doing something groundbreaking. I haven’t seen a lot about this so I thought I would bring it to you now!

As some of you may know Housemarque has teamed up with Eugene Jarvis, a world-renowned arcade game developer, to create their latest project which we haven’t heard a name for yet. It’s simply called the Eugene Jarvis Project. I’ve caught a glimpse here and there of some test gameplay and I have to say this game looks stunningly right up my alley. However, this article isn’t about that game. Well, not entirely.

You see, along with an amazing game, which I have no doubt about knowing the success of Dead Nation, Resogun, the Stardust games and many more, they are doing something unheard of until now. Starting from the first brainstorming meeting they have been filming everything. The basis of the game, the meetings about the direction, the genre, all of it. Along with the release of the game they’ll be releasing a documentary about the game development process. Real, not embellished film about what it takes to make a spectacular video game. 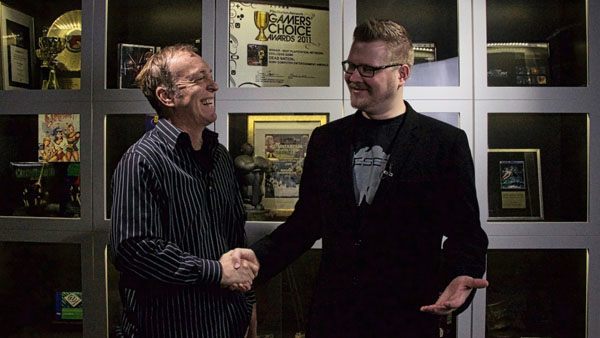 As far as I know there has never been a company willing to open itself up like this and let a documentary exist about it’s game creation process. Most would think there would be too much of their private info available through this but who knows what this entails. I can say it will be interesting to watch, at the very least. It’s always intrigued me as to how a video game came about and what all went into making it so this will be a fun experience for me.

Also, let’s not forget that there is an amazing game coming from all of this. I don’t know what it will be like but I can say it’s gonna rock! Housemarque has yet to let me down on a game and I highly doubt this will be the first. If you guys have any questions or want to see some of the info for yourself you can see the documentary site here  THE NAME OF THE GAME MOVIE and if you want to see more about Housemarque and their games you can go to there website here HOUSEMARQUE!

Thanks for reading and I’ll try to keep you updated as best I can! HAPPY GAMING!!!

Just your friendly neighborhood redneck from Alabama keeping things interesting. I cling to my God, my games and my guns! Roll Tide and HAPPY GAMING!! You can find me on Facebook and Twitter @johnfrazarjr
Previous JetTurtle – Interview with TG
Next Senran Kagura producer leads Valkyrie Drive: Bhikkhuni a new PSVita title