This is the first mobile game that I’ve reviewed and honestly, I’m extremely pumped to share it with you all. Beat Legend: AVICII ($2.99, Hello There Games) is a new rhythm game based on the hits of the late, great EDM artist AVICII. I have a long history with rhythm games. From DDR, to Pop ‘n Music, to Guitar Hero, to DJ Hero, to Rock Band, to JuBeat, to Tap Tap Revolution. I know my way around a rhythm game so I’ll be your guide to letting you know if this game is a good one or not. Let’s dive in! 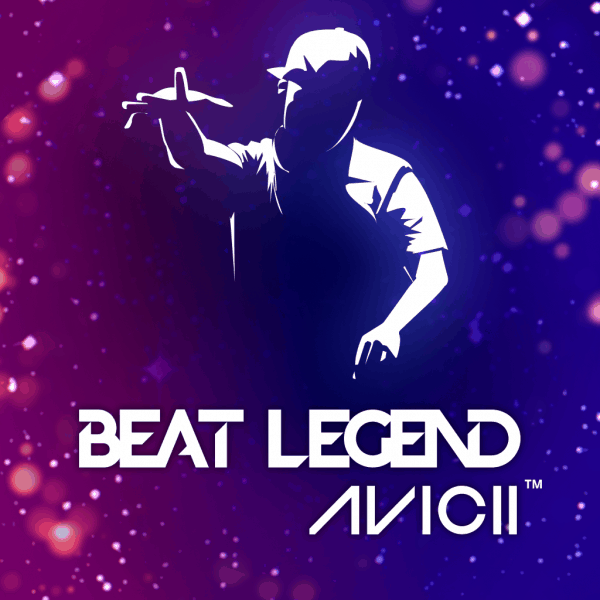 ‘Soar through vocal melodies, sweep each fade and attack every beat in this enthralling futuristic rhythm-action experience in Beat Legend: Avicii™. Experience a hypnotic journey through a musical landscape that will thrill both fans and newcomers alike.’

‘Music Royalties from the game go to the Tim Bergling Foundation, in a collaboration with the estate of the late superstar DJ. The charitable organization founded by the parents of Tim Bergling (also known as Avicii), in 2019, has a mission to advocate for mental health awareness and suicide prevention. Learn more about the Tim Bergling foundation here: https://www.timberglingfoundation.org/‘

First off, let’s start with the audio aspect of this title. There are 15 songs included in the game. The audio coming from my phone’s speakers sounded incredibly fantastic. The newer the phone, the better the sound from the speakers. It will sound great no matter the phone if you use headphones though, which is always recommended.  Another recommendation I have for you is to turn off the sound effects. It’s one of the game’s greatest annoyances.

The second greatest annoyance is the song previews. Sure, it makes sense to play a bit of the song when you’re choosing songs. That way you can hear the song to know if you want to play it. I get that. So you hear a song clip, then you choose the song, so you hear the full-length song. But the part that I think is completely non-sensical is the clip of the song on the screen where you get to see your scoring. It’s downright annoying. I recommend they change it to a soundscape or something else. It could be applause from an Avicii concert or something.

The visual aspect of the game is that of a Tap Tap Revolution style rhythm game. However, instead of notes falling toward the bottom of the screen and you’re just tapping them, there are greater elements at play. You instead have unique blacks, blues, purples, and whites as unique otherworldly shapes as the backdrop. The lower third of your screen is a spacecraft of some kind and basically, your taps are navigating the ship to the end of the song. The game is absolutely a treat to look at and is a great homage to AVICII’s life. 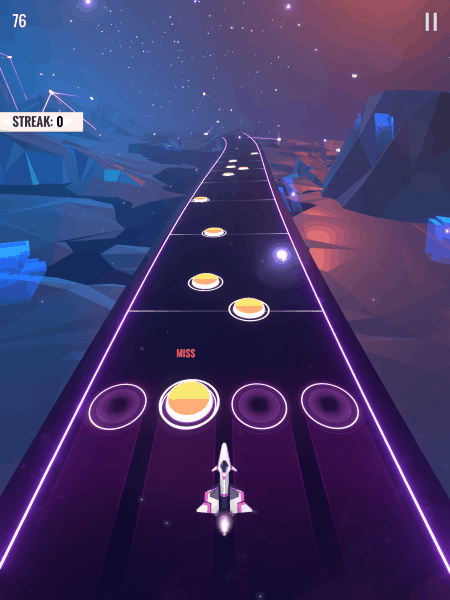 When you start up the game, you’ll find that the difficulty is on a per song basis. Instead of choosing a song and then choosing a difficulty like in other rhythm games. So in this title you have 1/3 of the songs be Easy, 1/3rd be Medium, and 1/3 be Hard. It’s not exactly easy to explain what they do to increase the difficulty on the heavier songs. Yes, rhythm games always introduce more buttons to press, but it’s more than that. In this game, they mix up the following mechanics more and more to inhibit your success.
1.)Changing between 3 and 4 button boards. 2.)Swiping left or swiping right on arrows that flip the board over to reveal a new pattern. This way you can’t see what’s coming. 3.)Changing the gameplay entirely where you must navigate through various rings in the air before continuing to the next board. 4.)Alternating Single presses and double presses. 5.)Long presses. 6.)Long presses with secondary presses using the other finger. 7.)The ship at the bottom taking up 1/3 of the screen at all times that notes approach (this is true of all 3 difficulties though). 8.)Including more multipliers that you want to strive to hit that could mess up your combo (risk versus reward).
The game is very forgiving in your timing. I played one hard song first before playing anything else, knowing nothing about the game. I got a B grade, so don’t be afraid. Yes, I’m heavily experienced with rhythm games. But if you buy this game that also probably means that you are too, so don’t have apprehension about the difficulty change. Additionally, the game doesn’t fail you if you miss a ton of notes.
The game is less about keeping the song going ala DDR and Guitar Hero, but more about enjoying the music and trying to rack up the largest score. In fact, you can actually use the game as a jukebox of sorts. Want to listen to “Hey Brother” but don’t own the “True” album? Just start up Beat Legend AVICII and press play on the song and just not play it and simply listen. It makes me think there should be a “Jukebox Mode” or listening mode of some kind. 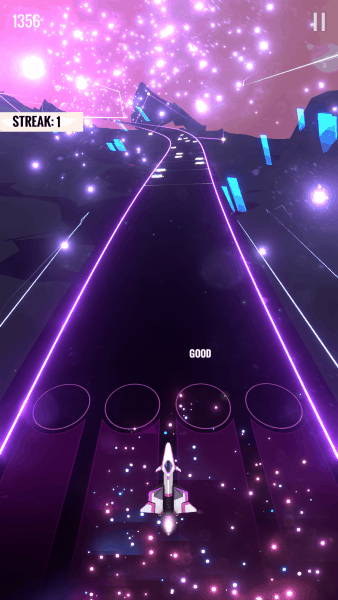 There should be a leaderboard at the very least in this game. At this point in time, it’s just you against yourself. So if you keep playing the songs it’s most likely because you want to best your previous score. I’m guessing with time there will be DLC added. I’d care less about that and more about giving the current songs more longevity. This can be done by making every song have an Easy, Medium, and Hard difficulty. For the same price, the game could literally have triple the content without needing to add more songs. 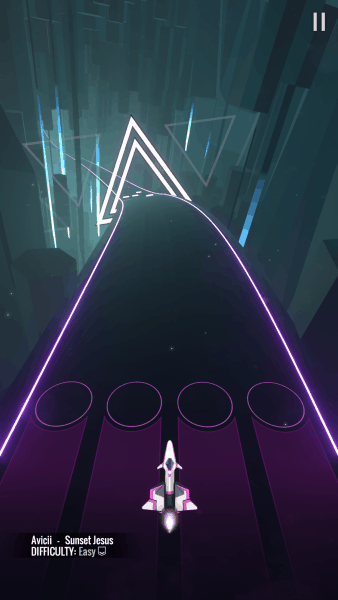 For $3 this game is worth your time and money. I do hope that they tweak the number of difficulties in the songs. Furthermore, they need to do something about that preview of the song you just played after the song, it’s overbearing. The amount of songs included is the perfect amount of songs for the price tag. The fact that you don’t “fail” if you miss a lot lets you truly enjoy the songs, revel at the worlds in the game, and get better at it without fear of being ridiculed by the game. Best of all, the song royalties go towards the Tim Bergling Foundation, a leading advocate for mental health awareness and suicide prevention. 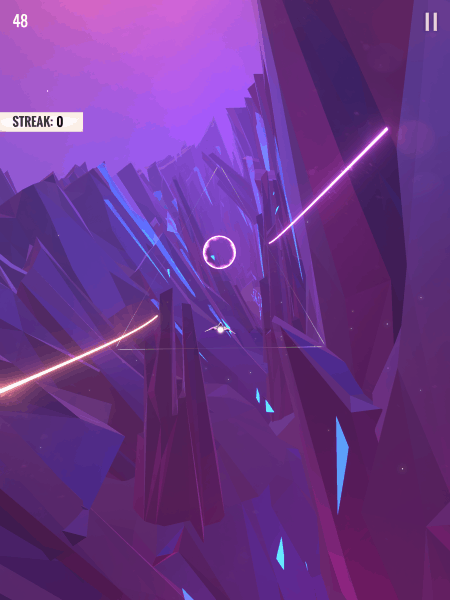 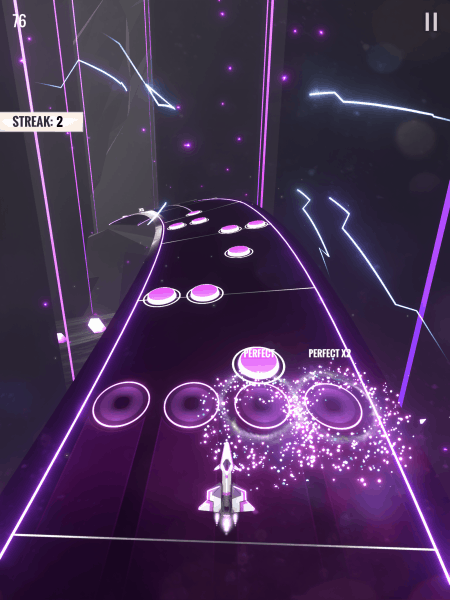