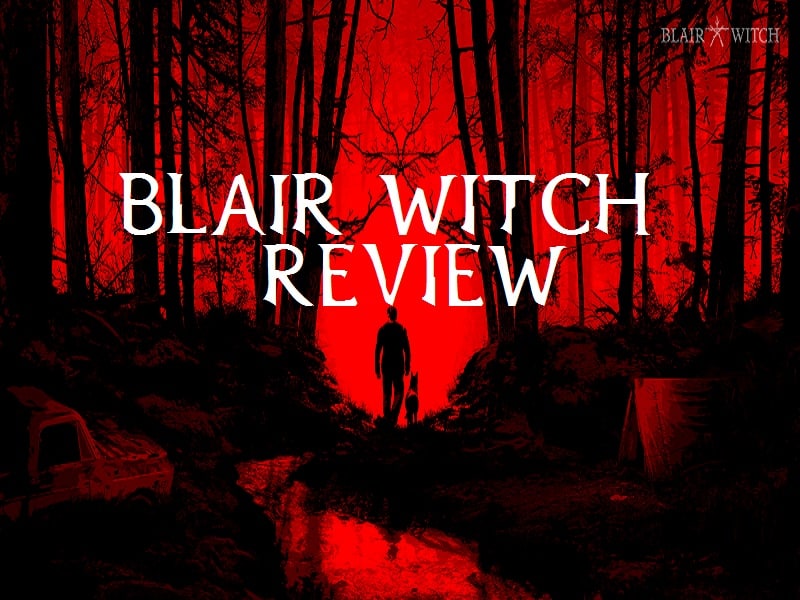 I got my hands on yet another mid-summer haunt, Blair Witch. This game from Bloober Team has already existed for some time elsewhere. But now it’s out for the Switch. so you can get scared on the road, in the woods, or on the toilet. Let’s sink our teeth into it.

‘Blair Witch offers fans and players alike their own descent into madness through an original story inspired by Lionsgate’s iconic Blair Witch film. Set in 1996, a young boy disappears in the Black Hills Forest near Burkittsville, Maryland. Players experience the horror as Ellis, a former police officer with a troubled past, accompanied by his trustful canine companion, Bullet, investigate. Their story starts as they join the search for the missing boy, but players shortly discover the horrors that await as the woods twist and turn into an endless nightmare. Ellis will have to confront his fears, and his past, along with the mysterious force that haunts the woods.’

‘Blair Witch will include the “Good Boy Pack” update, offering players the ability to personalize their canine companion’s fur attributes, eye color, and collar, along with additional Bullet animations. The bundle will also contain the “Super Rex” mini-game which Bullet fans cannot resist.

The game will support key features of the Nintendo Switch: HD Rumble, TV Mode, Tabletop Mode, Handheld Mode, and Touch Screen Support in the game menu. Immerse yourself in the disturbing atmosphere of the Black Hills Forest anywhere and anytime on the go!’

Let’s start with the audio. The game really shines in this department. Of course, any survival horror fan already knows the drill. But Bloober Team keeps it going in Blair Witch. Distant eerie sounds, crunching under the feet, the dog’s sounds, everything. The whole package, when executed gives you a sense of impending doom. But since the game drives you with a story and narrative, you must keep going. As you come across the fiends that attack, you’ll find that they also have a whole host of sounds designed to make your skin crawl. Especially in the last level of the game when everything is at its most tense.

Now onto the visual. The Switch version that I reviewed is definitely scaled-down graphically from its XBOX/PS4 counterparts. It doesn’t look quite as grand overall with having lower poly…everything. The edges of the items in the game are fuzzed over a bit to make it seem less jagged. However, if you haven’t seen or played those high-end versions of the game, then you’re not going to care here. The visual style remains intact and the game still plays great on the Switch on the go. This is helped by the fact that you don’t have to actually “read” the items that you pickup. They put the text on the screen in the style of Resident Evil. That will keep you from having to read stylized handwriting or scratched words that may be too fuzzy.

Maybe they’ll improve the visuals later with a patch? The Witcher 3 kept getting visual fidelity options to help you fine-tune the experience. Although, you’re in the Witcher 3 far longer than you’ll be in the world of Burkittsville, so maybe they won’t bother. Either way, when you’re playing portable, you’re not going to care. However, when you dock the Switch to play it on a big screen, it’s all too obvious. Get this game only if you’re playing it in handheld mode like I did.

If you’re wondering if this game is actually part of the Blair Witch family of movies or if it’s some kind of reboot, I’ll answer this as simply as I can. The game itself is set a couple of years after the events of the first film. That’s about all that I know, it doesn’t appear that Book of Shadows has anything to do with this. As far as the story goes, I won’t be divulging into it too much as I don’t want to ever spoil anything for our readers. I will say that you’re playing an ex-cop that is out to help find a missing child in the woods of Burkittsville. That’s a good enough jumping-off point, but you have to really assume, since this is Blair Witch, that there will not be positive outcomes.

It’s probably no surprise to anyone that this title is a survival horror game with puzzle elements, done from a first-person perspective. It doesn’t follow in line with third-person ones like Resident Evil or Silent Hill. It’s a first-person perspective to really mess you up. Generally, this is because it’s easier to scare the player by making things come up behind you without you seeing. There is a dog that you give commands to so you’re not alone. The canine helps you in a variety of ways. First off, your dog is a great replacement to a minimap, guiding you around the dense and confusing forestry. Best of all, man’s best friend here helps you uncover useful items. One addition to the Switch version is the ability to customize the dog’s color, eye color, and eye color.

Now let’s talk about the puzzles, the interesting part. It’s definitely something that took me a while to grasp. Let me see if I can explain it without confusing you, dear reader. You’re given a camera. It’s not like the camera in Infliction or Fatal Frame, it’s for helping you solve puzzles. As you search the woods, you’ll come across mini video cassettes (it’s the 90’s after all). If you put a tape into your camera to watch it, the world around you will become real-time with the events of the tape. So if something is blocking your path in the real world and then you watch the tape of that object falling to block the path, the tape can help. Simply rewind the tape to the time that there was no blockage in the video and then return to your world, the blockage will be gone. There’s a lot more difficult thing than clearing paths with the camera, but that’s the fun!

Feel free to also use the camera in real-time to circumvent baddies that are in the area. The camera has a way to help you detect them without them noticing you. You get to essentially use the camera to stealthily make your way through the game if you’d like. If you’d rather fight off the enemies or get stuck in a situation where you didn’t see them coming, you have the flashlight to help fend them off. Luckily for you, the game is more about the exploration of the world and solving puzzles rather than fighting baddies around the clock. Your game changes if you avoid them versus taking them on, so keep that in mind.

This game is definitely linear, for sure. However, are there aspects of it that bring you back to the game? Well, I think that since there are no real extra modes, you have to examine what you can do in the one mode. You play through it, solving necessary puzzles, and navigating the woods with your trusty companion. Depending on how you treat the dog, that can affect the game. The same goes for if you avoid the enemies or if you come at them head-on. Additionally, there is a secret ending if you do everything right to execute it. I would say you could play this game 2-3 times and get the most out of it that you can. Even if you take your sweet time, you’re not going to be in the game any longer than 4-5 hours, depending.

The dog aspect of the game is great when it works. Unfortunately, the pooch has been known to freeze in elements of the environment. You can restart the save file to keep the game moving. This was the only real hiccup of the game for me. I really enjoyed the terror invoked by the baddies and the atmosphere. If you’re someone who doesn’t like the real world right now and are looking for some kind of escape, Blair Witch will take you to a world of messed up, high stakes horror.

For only $30, you get a solidly distracting game that is terrifying the go. There’s no way to deny that having scares on a car trip at night isn’t too much to handle…and I love it. The puzzles are nice and challenging, but not so ridiculous that you put the game down. I think the blend of horror, puzzles, and taking this on the go makes the game great for its price point. I suppose they’ll fix the dog and visual issues via a patch later on if they haven’t already by the time this article goes live.

Click here to buy this for your Switch right now.