A game that has been downloaded thousands of times on Steam over the last couple of years has finally made its console debut! That’s right, Fight’N Rage ($19.99, sebagamedevs) is out now on XBOX One, PS4, and Switch! And while I’ve never played the Steam release, I should still be able to let you know if this game is good or not for console. So you won’t see any outright comparisons to its older brother, it will just be a review of the merit of the game on consoles. So let’s do this! 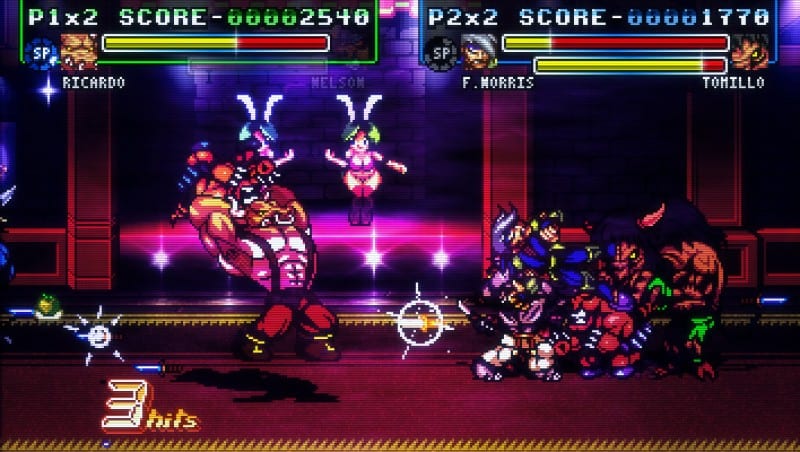 ‘Fight’N Rage is a brand new old-school side-scroller beat’em up. Inspired by the classics from the “golden age”, and with an art style that mimics the aesthetic from the 90’s arcade gems, this game pays homage to all classic gameplay features that makes this genre one of the best from its time!’

Okay, here we go. All of you probably know by now that soundtracks are my favorite topic of discussion with video games. Since I haven’t reviewed a game in quite some time, I wanted to cover a little bit more about this than usual. First off, we are greeted right up front with a screen that tells us who created the music for this game. That man was Gonzalo Varela and he is a musical mastermind, at least in my humble opinion. The game isn’t incredibly long overall, more on that later, but he still managed to create roughly 40 compositions in total and none of them are repetitive. As you can surmise, they follow in the vein of music from older style arcade machines. Gonzalo has managed to curate a seamless playlist of music that spans from upbeat to bass-y to moody. Whatever the levels called for, the man found a way to make vintage-style music for a modern vintage game. If this game had come out in actual arcades in the late 80’s, our pop culture would know these tunes by heart right now. But alas, I’m fearful that since this game has come out in a day where digital games are a dime a dozen, most will never hear these tunes. To help get the word out, I linked the Bandcamp page to the soundtrack at the bottom of the article. The whole soundtrack is only $8!

The visuals are also in the same vein, arcade-like and unique. We all know what popular arcade games from the late 80’s look like. This title takes inspiration from games like The Simpson’s Arcade and the TMNT games. This means we have animated sprites on a 2.5D backdrop. All of which looks exactly how we remember it, but wrapped up in a fresh tortilla. The visuals don’t stop there either. We also get fun features like the glare on the screen, a bend and stretch to the corners, and scanlines. And for those wondering, yes, the same effects are there on the undocked Switch version as well. So you have a lot going on on the small screen. It does definitely take some getting used to. There’s so much on the screen and so little screen real estate.

To combat this, you can go into the settings and change the visual options. Your first option is that you can change the overlaying post effect. You have the default CRT monitor, but you can also choose clean or smooth. Clean is basically a pixel perfect mode while smooth is a softer edged display. You can then further tweak the display settings with changes to the raster mode, the HDR levels, and the color style. But if your main intent is to keep the screen as empty as possible, then you can change the Extra Space on the screen from showing you your speedrun data and instead just be an empty space. This will clear the upper right-hand corner of the screen. You can also set it all back to the default settings if you’ve gotten all of the settings too mixed up and you can’t quite figure out how to go back. 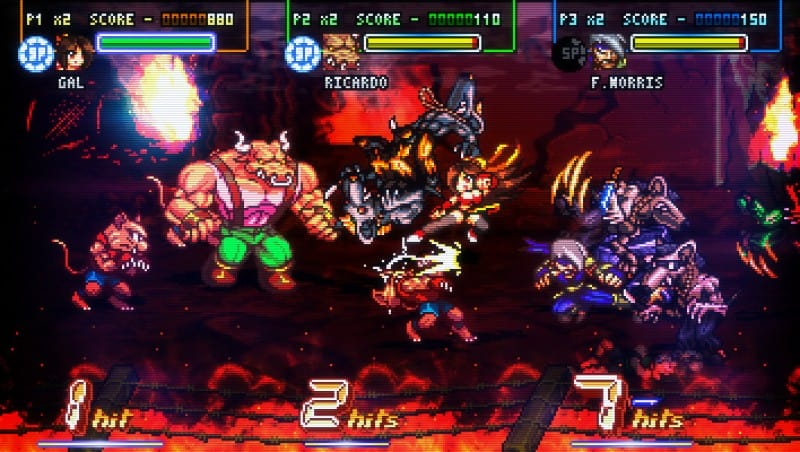 I just want to start by saying that the title’s main mode is an arcade mode. So technically this isn’t the world’s longest game, but since it’s replicating arcades, that makes sense. We’ll talk more about the game’s longevity in the next section. However, in this section we’re going to quickly dissect what the arcade mode truly consists of in terms of gameplay. First of all, you have three different characters to choose from.

How does the actual title play compare to old school brawlers? Well, it takes what you already know about them and cranks them up to 11. First off, you have the three buttons that everyone is probably used to by now. You can jump, attack and you can also special attack. You can do basic combos just by tapping your attack button. However, you can tweak it with some other facets. You could tap up or down at the end of your attack, this causes a throw or a slam. Not only that, you can walk at them by pressing a direction, but you can run at them by double pressing the direction. If you start with a run at them and then attack, you can really up the ante. The same goes with attacking while in air, lots of combinations.

With regard to the special attack, it gets interesting. You have a cool down for it that slowly builds up after you use it, so use it wisely. However, the game wants you to have fun and has a risk versus reward function with the special attack. If you’re still in the cool down phase and press the special attack button, you can still use it. The downside here is that it takes a chunk of your life. I have accidentally done the final blow to my life using it on a whim. Or you think you’ll come across a piece of food later to give you health, so it’s okay to use it when you’re in a tight spot. But then you don’t get any food and the boss kills you. Use this feature wisely, if you even use it at all.

And as all of you probably already know, the game is a 2-Dimensional game. But the way that these arcade games work is that you can move up or down on the screen. Or to put it another way, you can move your character closer to the top or bottom of the screen. This means if a character drops a knife or a piece of food on the upper half of the screen, you can press up and approach it. You can also get good by double pressing up or down to dodge enemies.

There are a lot of different styles of baddies that you’ll fight against. I truly have to commend SebaGameDevs here. The amount of monotony will always exist in these kinds of games, but if you look in any given screenshot, you’ll see at least 5 different character types in any given picture. I’m not just talking about color palette swaps either. Sure they exist, but there are tons of different actual character sprites. All of them operate differently as well, forcing you to really know what each character does as well as their color and style variants. Furthermore, you truly feel like a badass clearing a whole screen full of these baddies. The only bummer is if you choose the female character, she is shorter than most of those enemies, so she is hard to see on screen sometimes. She is the true character to choose if you want a challenge.

Each of the different characters have different primary stories. This is different for arcade-style games. Usually, in the past, you’d drop some quarters in and play a standard game with whatever character you wanted. And while the movesets varied, the game was the same. In Fight’N Rage’s arcade you go through with a different character and that character’s story beats are different. It’s a nice experience, especially because, as I’m about to talk about in the next section, you’re going to be replaying this game a lot. 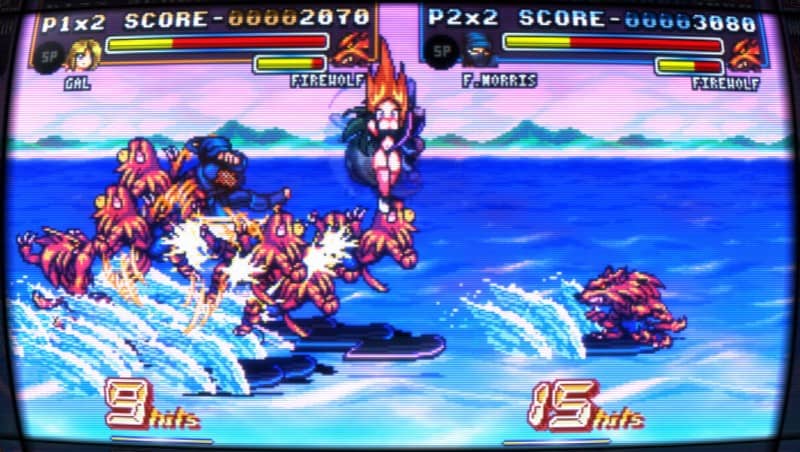 Tons of replayability to unlock extra modes and characters. While I still haven’t unlocked all of the characters, we can talk about the extra modes. First of all, you can play through the arcade as I mentioned before, but to get the full depth of the game, you have three separate characters with three separate movesets. This means that you can go through it at a minimum of three separate times. That alone should make you feel that you’ve gotten your money’s worth. However, it really doesn’t stop there. Because aside from that, you can enable the speed run timer. So if you get really good with one of the characters, you can try to speed run it. This makes the game more infinite in that regard. Try to shave off a second or two here and there, that makes this game more valuable both monetarily and longevity.

Now, on top of all of that is the option to increase or decrease difficulty. That means if you truly want to maximize your time with this game, you can play through it several times the previously mentioned ways and then mix the difficulty! Beyond that, you’ll find that from the main menu you can also access a training mode. I’m not going to comment much on that because everyone reading this has played some type of fighting game training mode. You’ll also find that there are plenty of unlockable skins which is separate from the character unlocking. All of these exist on top of the fact that there are multiple character endings and unlockable secret paths as well.

Was all of that not good enough for you? Well, just know that there are also more modes. Such as an endless-type mode that has you fighting against swarms of endless bad guys until you fail out. This will test your mettle for sure. Furthermore, you can fight against human players in an online brawl mode which will always offer a unique experience. This game is truly a beast. 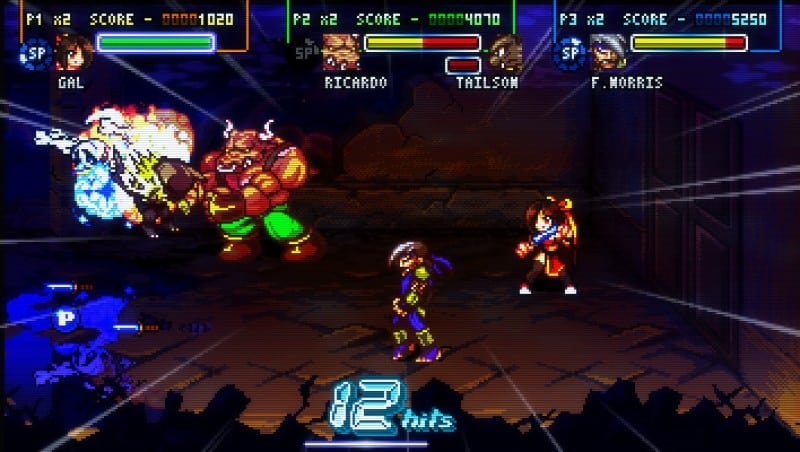