Today we have yet another review of Nintendo Switch accessories. The accessories we’re reviewing today are from the all too prolific Nyko. These guys just keep pumping out products and not just for the Switch either. Now, when you’re as prolific as a company as Nyko, you’re bound to have a few misses amoung all of your hits. Will the Power Shell and Power Pak be among those hits? Or will they be some of the few unfortunate misses? There’s only one way to find out!

‘Conveniently store and charge your console on the go with Nyko’s Power Shell Case for Nintendo Switch™. Power Shell Case allows you to easily transport and protect your Switch. Featuring a 5000 mAh battery, Power Shell Case provides up to double the battery life and allows you to keep playing after the internal battery runs out. The case charges the Switch via the stowaway Type-C™ cable and wraps neatly around the inside of the case when not in use.

A dedicated power button lets you enable charging when needed. An automatic shutoff switch will pause charging automatically when the case is completely closed to prevent overheating. The LED indicator will keep you informed on how much power is left. The case is recharged by the included Micro-USB cable. The foldout stand allows you to enjoy tabletop mode while charging the Switch at the same time.  Store up to 12 games and 4 microSD™ cards. Includes a screen protector and cleaning cloth. 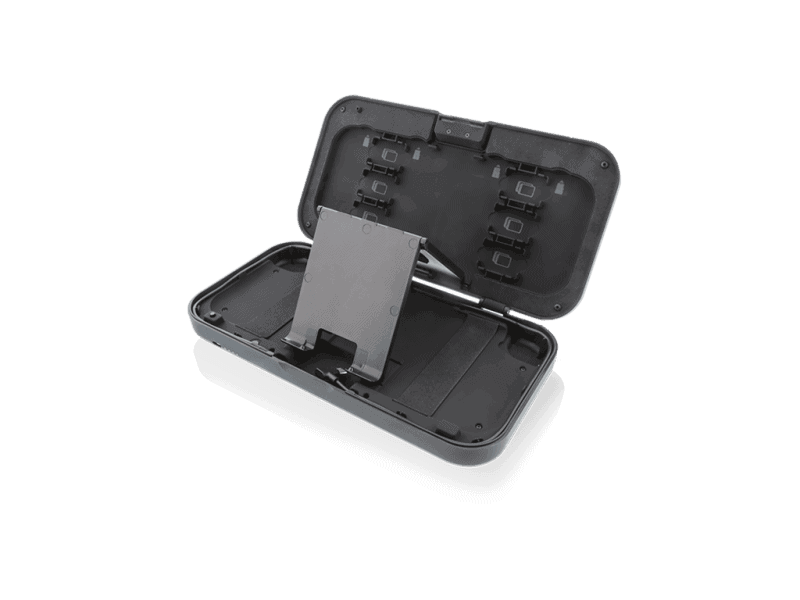 The pros for the Power Shell will come out to outweighing the cons. The accessory comes with a microUSB cord to charge it with. It also comes with a couple of other Switch necessities such as a screen protector and a cleaning cloth. The two of them alone make this a better purchase considering the number of times that you’re required to touch your Switch’s screen for gameplay. I didn’t really have a chance to test the screen protector as I already have a glass one on my Switch. But I can assure you that it’s the same quality as ones that you would buy at from Gamestop for $9.99!

Build quality is also really great, as the Power Shell doesn’t seem to crush or buckle under pressure. The stand inside can definitely hold up the Switch, it won’t give under the weight. The hinge on the case is really strong as well, I tried to twist the two halves apart. Let’s just say it would take a lot more than my two hands to break this case apart.

There is form factor cut foam inside that is incredibly soft. The foam does two things, it helps give structure and support to the overall strength of the case. And it also keeps the Switch from moving about inside of the case. One other thing that I enjoy about the build quality is how soft the outside is. They’ve coated it in a matte rubberized finish. It takes a lot to scratch it and the design is modern and sleek as all get out.

There are enough slots for holding plenty of cartridges. It has six slots, but you can technically stack a couple of carts in each slot if the six isn’t quite enough. Whatever you end up feeling comfortable with and works for you. The same cannot be said for the microSD card slots on it. They’re to store exactly four extra microSD cards, you cannot put two in each slot! Do not try it, you will most likely damage your microSD card. That being said, I’ve not yet met anyone who has more than one microSD card. However, if you are one of those with multiple cards, this is a nice and tidy way to keep them with you and not run the risk of losing them. 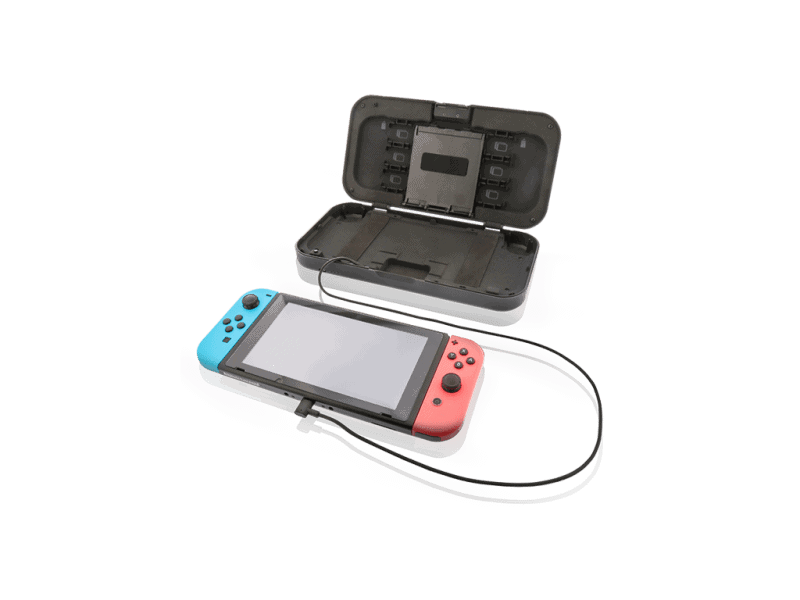 The biggest boo-boo here is that the Power Shell should charge your device while it’s in the case. It absolutely does not, so please know that before buying this device. It’s interesting that it doesn’t charge while the case is closed. That’s the time when I would most likely want it charging, despite it is advertised as a tabletop charging solution. That makes our next product down below a much more desirable piece. Not to mention that the product is less money.

However, the way around that is like if you’re in need of a charge and sitting in the car and have the case closed, just open it. It can sit in your lap or a free seat in the car and charge. Or if you’re needing a power boost for your Switch and it’s in your backpack, just open it all of the way up nice and flat. Then it should rest in your backpack and charge your Switch, no worries. I’m guessing that it’s just a safety feature, but people charge their phones and devices in their backpacks and such all of the time on the go, you don’t really hear of many incidents.

Maybe something happened with this specific product while testing and so they chose to remove on the go charging. Maybe they just wanted you to save your battery so that you can charge it while you play? That would be the most detrimental time to be charging the Switch. Only because the case will probably keep charging the Switch even when the Switch is completely charged if you were charging it on the go.

And that’s the major overall issue that I could find with this. I’ll talk more about it in the overall thoughts section down below. I’ll be comparing the Power Shell against the Power Pak after I discuss the pros and cons of the Power Pak. 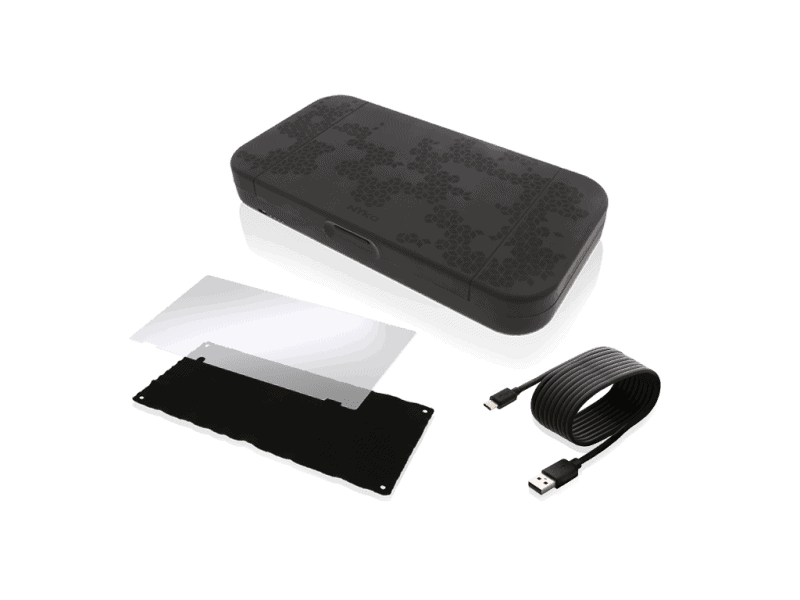 ‘Extend your playing time with Power Pak for Nintendo Switch™. Power Pak allows you to keep playing after the internal battery on your Nintendo Switch runs out. Featuring a 5,000 mAh battery, Power Pak will provide up to double the battery life and keeps you going when you’re away from your dock or power source. The sleek design allows Power Pak to attach to the back of the console and is turned on via the button on the back. Recharging the Power Pak is done through the Type-C™ connection on the side. The lights on the back will keep you informed on the charging status. No ports or vents are blocked and the built-in kickstand allows you to enjoy tabletop mode while having Power Pak attached. 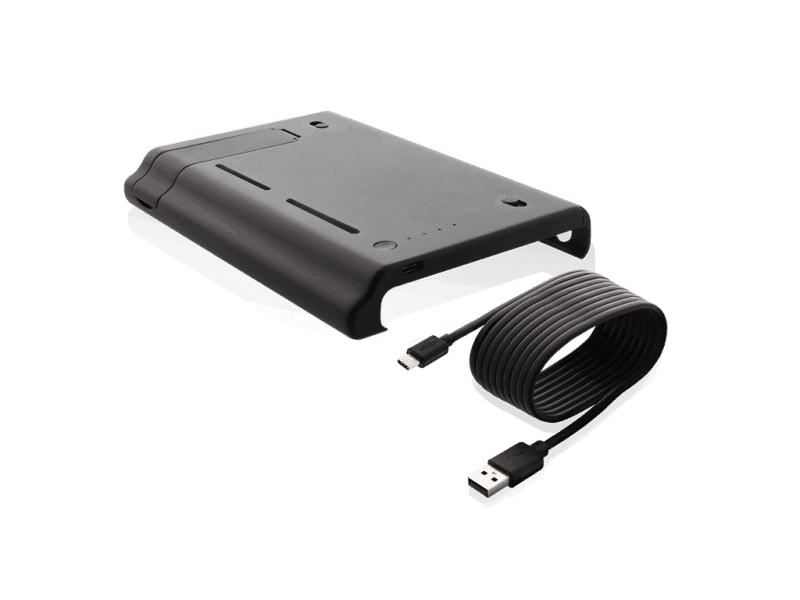 This thing is definitely a clean design when you take it out of the box. Every port is open and available, as the box states. It easily comes apart to put the Switch into it. The kickstand is nice and long for increased support. The build quality is overall pretty good, I’ll mention it’s downsides in the con section below. But I’m very impressed that the USB-C plug in the Power Pak is both sturdy and long enough for a proper connection. It can charge your device both on the go and during play. It charges up super quickly, so you can either charge through the microUSB port on the side until both the Switch and Power Pak are charged. Or you can separate the two and charge them individually and get the charge done a little bit quicker. It’s great to have options.

The LED indicators on it work with letting you know how much charge it has. For those of you who have never had a battery bank of any sort, the LED indicators are general just four lights. Each of the lights illuminate for every twenty-five percent of charge that the device has. So when all four lights are lit, you’re fully charged. If you charge both your Switch and Power Pak at the same time, the case will charge the Switch first and then itself. Be aware of that because if you’re trying to charge the Power Pak and have a Switch with a low battery, it gives the Switch precedent. 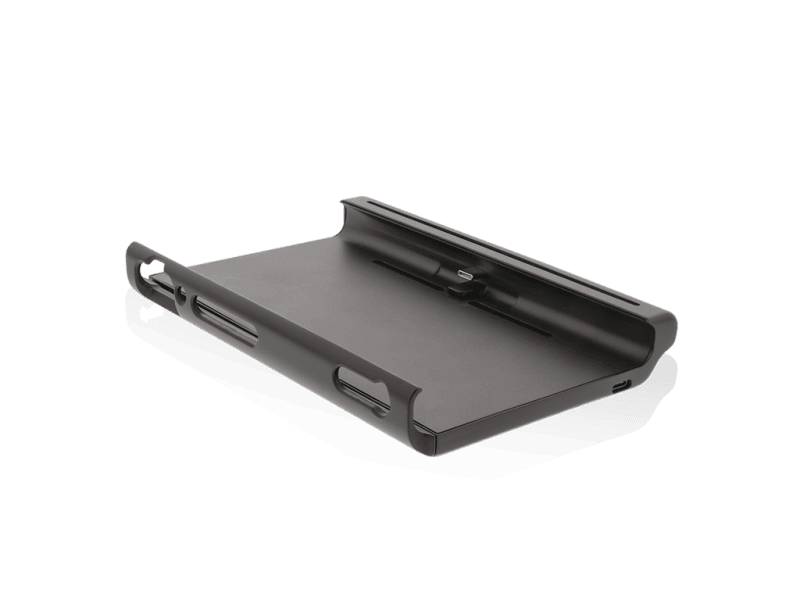 Well, right as soon as I got it out of the box after the camera was off, I put it on the Switch. I set the Switch and Power Pak combination down and then picked it back up a few minutes later to take some high quality pictures of it for this article. I immediately decided against taking the pictures after I saw the Power Pak again. Apparently the back was already scratched, I’m guessing I bumped it as it set on my desktop surface.

So, I’d have to say that a great big con here is that this device isn’t coated in the same matte rubberized finish that the Power Shell is. They don’t sell any kind of Power Pak skins or anything to help thwart scratches. As the days went on, the scratches only got worse and more noticeable. If you don’t mind that and just want a battery bank connected to your Switch, then disregard this point.

The device is heavy and shouldn’t really impact the handheld gaming experience, but it does. It has all of the weight in the middle of the device and you definitely start to feel the fatigue after a while. You’ll have to play in tabletop mode a lot to find any usefulness of this battery bank. The kickstand, as I mentioned, is quite a good kickstand. The bummer of it is that the kickstand needs to be popped out very gently. If you do it too hard or too fast, the hinge of the kickstand that is connected to the Power Pak, will pop out. Then it’s sort of a pain to get it back in. This also means that you run the risk of losing it for good if you’re not careful. 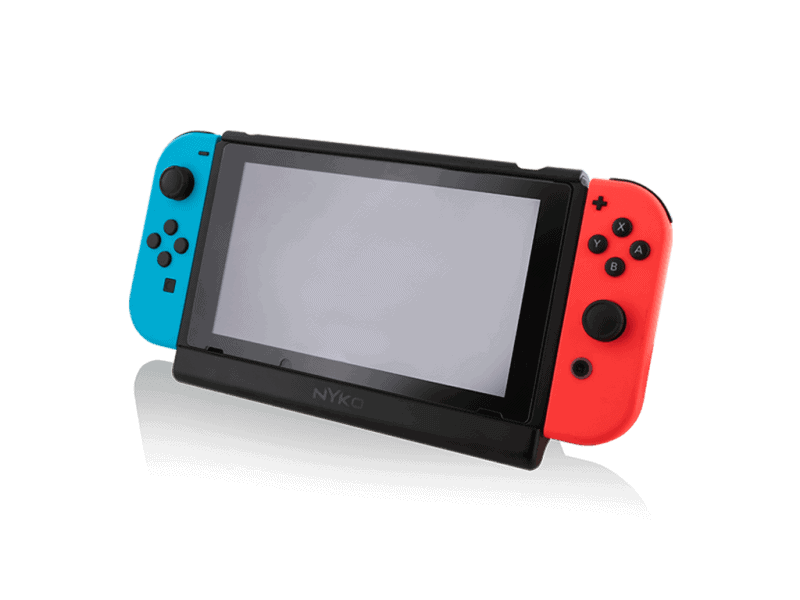 Overall Thoughts for the Power Shell and Power Pak:

It’s basically kind of a toss-up between the two. They both have attributes that make them purchasable, clearly. But they also have things that would make me leave them on the shelf if I knew those things about them. I would really just recommend that you really read and re-read my article to make certain that you know which one you would rather have for your Switch to be charged. The Power Shell and Power Pak both work better as an on the go sort of charger, but only the Power Pak can give you that out of the box. On the flip side of that same coin, the Power Pak also only works better as a tabletop setup. It’s just too heavy and in the way to be of much use during handheld gameplay. So in that regard, it’s identical to the Power Shell.

Like I said, it’s able to actually charge your Switch when you’re not using it. So my final thought would be this, if you’re okay with spending a little more and you don’t currently own a case for your Switch, just go ahead and get the Power Shell. If you already have a larger Switch case and you’re looking to save money, just get the Power Pak and use it as a form-fitting battery bank. It easily comes off, so I recommend just charging it with it and taking it off for handheld sessions. 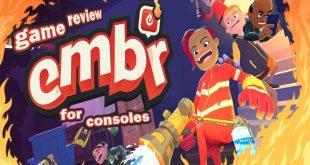