Today’s review is a game that has bounced from platform to platform, making its rounds. Well now its made its debut on the Nintendo eShop and we’re going to give you the skinny on it. The game in question is Saturday Morning RPG (Mighty Rabbit Studios, $9.99). Does this game translate well to the Nintendo console? Does it still warrant being $10? Is it as fun as everyone says? We’re going to skim it from top to bottom for you! 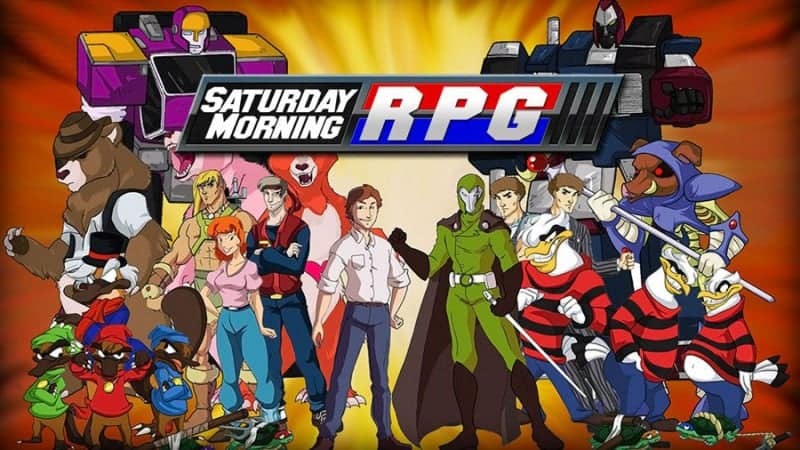 ‘Saturday Morning RPG is an episodic JRPG set in world heavily inspired by 1980s Saturday morning cartoons and pop culture. Players take the role of Martin “Marty” Michael Hall, an average high-school student who has just been granted an incredible power – a power that ultimately leads him to attract the ire of the world’s most notorious villain, Commander Hood! Saturday Morning RPG features a full soundtrack by legendary composer Vince DiCola (Transformers: The Animated Movie, Rocky IV) and his composing partner, Kenny Meriedeth (contributor for DuckTales, Power Rangers, X-Men, and others).’

The audio itself in this game, for me, wasn’t as fulfilling as the soundtrack in terms of audio. But don’t get me wrong, you can very much tell that they put a lot of time in the sound effects. There was a sound for practically everything and even stuff that I would not have originally thought would be making sounds. Like for example, whenever you would use a specific item and a villain blows up, they’ll fly toward the screen with a final death scream! That never got tiring and was always able to supply me with a chuckle. I thought that all in all the sound effects were fun and playful but had a hard time scratching the nostalgia itch that I had as much as the rest of the elements in the game. Thus making them the harder topic to talk about.

The soundtrack though, now that was where the party was at! There was a ton of nostalgic music in this game, or rather, that sounded like throwbacks. Anything from a score that seems to sounds like something from Back to the Future to heart-pumping tracks reminiscent of 80’s cartoons like Transformers. I love the fact that they still kept with the theme of the game being a JRPG though and chooses different music for the actual battles. And when you return to the overworld, you’re back to the music written for that specific level. I love that they found a way musically to make a high school seem like a villain’s evil lair! 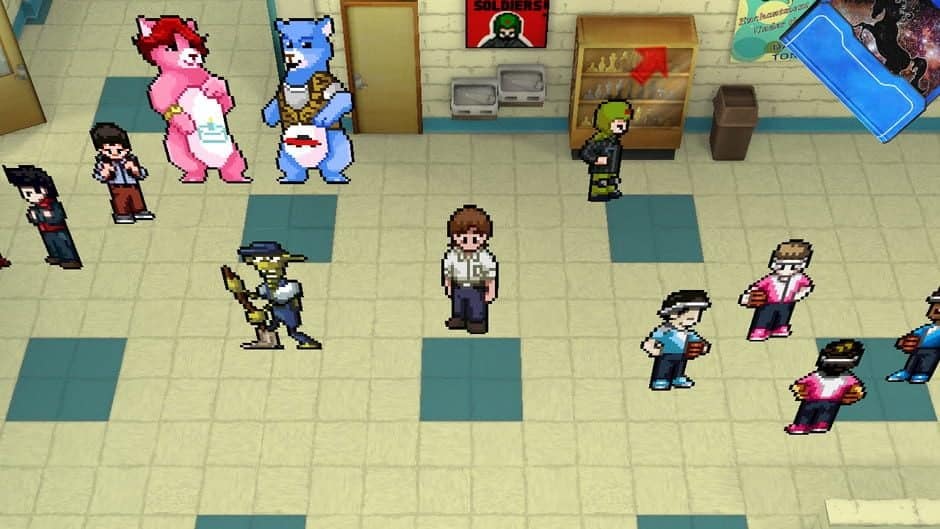 Visually speaking, this game is teeming with charm. It has fun 2D and pixelated characters in the foreground. But they’re standing in fully rendered 3D settings, thus giving you a diorama type look to the game. Even the main menu of the game has elements of 2D and 3D mixed together. You are basically sitting in your 1980’s den with a wooden coffee table featuring an oversized remote control. The TV is where you’ll see your menu options and it’s complete with a woodgrain bezel. They probably overthought everything in this den that you only see a couple of times, but I’m so glad that they did.

There are some downsides to the visuals of course. I’m not exactly certain if this is a gameplay issue or a visuals issue, but I’ll just bring it up here and now. When you’re fighting the boss at the end of episode three, you’ll experience some intermittent lag. Now, I’m also not certain if this only happened to me or other people too or if it only happens on the Switch version and not others. But, it only seems to happen when you’re fighting the boss’s minion and the boss flies overhead and drops several bombs on the level to hurt you.

As I’ll mention later in the Gameplay section, you can block attacks if timed right. Every so often though, it wouldn’t let me press or do anything whatsoever. I’m guessing that sometimes it’s just too much happening on the screen at once. Luckily the damage dealt wasn’t enough to kill me and I ended up beating him eventually. But it is definitely still frustrating if you’re uncertain if you’ll beat him. He is beatable though, I had to play him five times to finish him off. 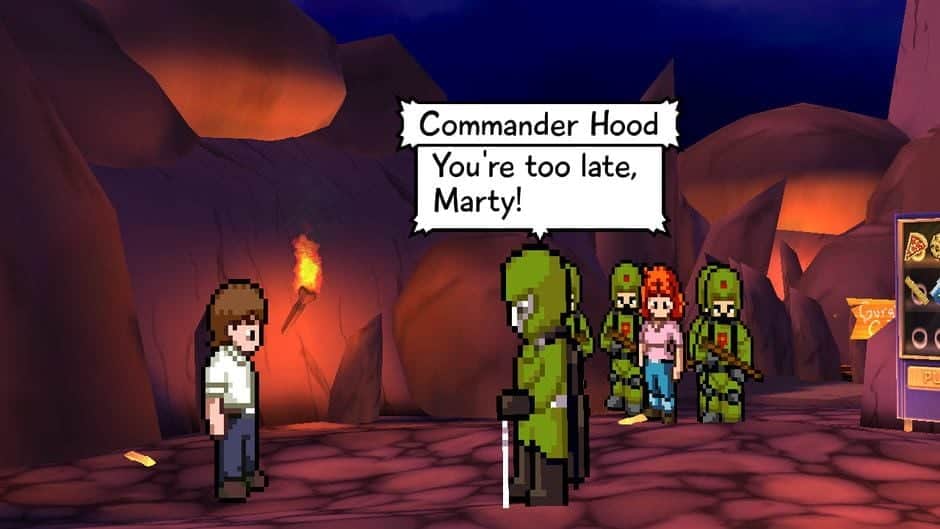 So this game is the first JRPG that I will have finished in its entirety within 10 hours. That’s because it’s a perfectly paced game that doesn’t play for too long. Each chunk of the story is done in episodes. So you sit down at your virtual TV in the den and choose an episode to play. Just like as if you were watching them on a Saturday morning (I still can’t get over how much I loved that). I loved so many of the 80’s elements actually. From the villains’ look and name to the humor and other characters’ names. But the 80’s references don’t stop there. The gameplay itself is chock full of them.

You have a magical binder that has scratch and sniff stickers on the front. These scratch and sniff stickers must be scratched as fast as possible before a fight starts. But you need to really, truly hurry because if you don’t scratch all of them before the fight begins, you can’t use the unscratched ones. This can dynamically change the results of the fight. You could definitely lose by not having one sticker on your side. The upshot is that this game is a bit forgiving if you miss a sticker you can just pause and restart the fight and rescratch the stickers. There is no punishment for just restarting a battle. I don’t know if that’s a flaw or if they wanted this game to just be a pick up and play title that didn’t take itself too seriously.

For the most part, attacking and blocking are all button prompts that having timing windows. The closer you get to the exact time that you need to hit or block, the more potent the attack or block will be for you. There are other timing aspects in the game such as the minigame to build your multiplier for special or regular attacks. There is also a chance that you can increase your multipliers even more the better your block the opponents attack. So this not only helps you in terms of staying alive but will increase your next opposing move on the villains.

And of course, there are some non-fighting elements in this game. Not crafting or anything over the top like that. But you can always find new stickers to mix and match, there is a limit of active stickers, however. You can buy new abilities as well from vending machines, so make certain to keep an eye on your money. There is also a nice puzzle-solving feature that I found in episode three for example. You could tell they didn’t want the gameplay to get repetitious, although it definitely does feel that way sometimes. But that really means that you keep losing and should try a different sticker combo, be more accurate on your attacks/blocks, and choose different enemies to attack first.

Lastly, there are a few nice touches that once I discovered them, they were a nice inclusion that I used every time that I played. However, the game doesn’t really tell you about them per se. The first of which is that the touchscreen is completely usable as well as the physical controls. Lots of Switch games surprisingly don’t let you use the touchscreen or if they do it’s either that or the buttons, not both. This one gives you the choice as the player. I use a combination of both of course, as I feel like I have more options. The other inclusion was the hoverboard that is available to use in the overworld. This dramatically increases your ground coverage and while it’s not as useful as Fast Travel is, it’s much better than walking.

The only real downside that I saw to the gameplay was some weird glitch when I got an achievement. The achievements pop up at the bottom of the screen once you get one in game. What happened was when I got the achievement Number Five is Alive it popped up as it’s supposed to, but it stayed there. I tried to exit the fight I was in and it was still at the bottom of the screen. Since that didn’t work, I tried to exit to the game’s main menu and it was still there. I ended up having to press the Switch’s home button to exit the game and then forcibly close the game. Then, when returning to the game it was gone. And luckily, I still had the achievement completed. 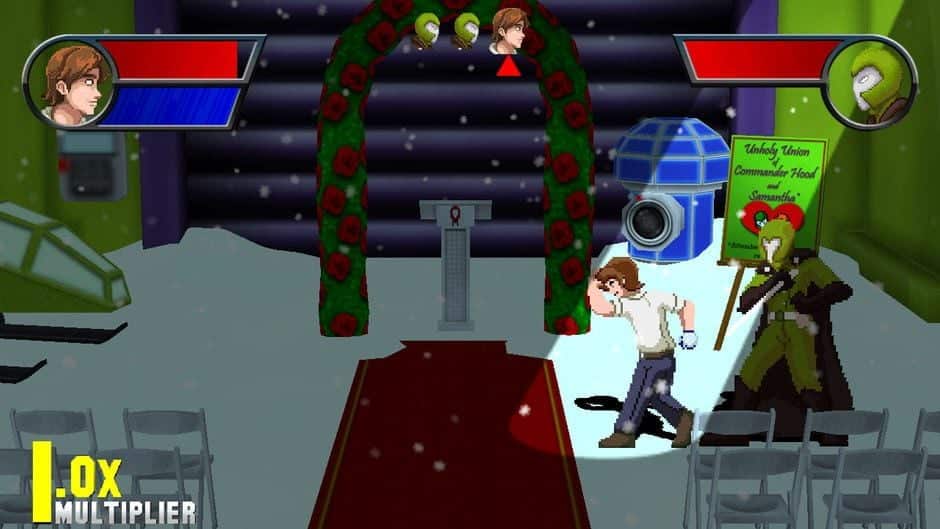 As I mentioned before, the game is split up into TV-style episodes. The game features a total of five episodes of varying length. If this isn’t enough gameplay for you, just know that the story isn’t exactly 100% linear. There is the primary gameplay, sure. And the game always points with an arrow which way you need to be heading next. However, every so often you’ll find side quests that have been hidden in the gameplay. If you find them and play them, that is a good way to extend the game. I would almost play through it linearly first and then play it a second time through searching for and completing the small side missions. The same can be said about trying to complete all of the game’s built-in achievements.

If you don’t really care for the story as much as the gameplay, there are ways to extend the gameplay. Saturday Morning RPG also features an Endless Mode in it. So, you know, you can play until you die or just want to not play anymore. And the title also features an Arena Mode. I wasn’t entirely certain of what Arena Mode was when I first saw it. Upon Googling I found that the explanation from Mighty Rabbit Studios was this, “Take on powerful enemies in optional arena battles. Two fights are currently included, with more coming as free updates.” So I guess it isn’t much right now, but they’ll be extending the life of the game and Arena Mode with updates in the future. All of which means that you can feel like you’ve stretched your $10 purchase further. 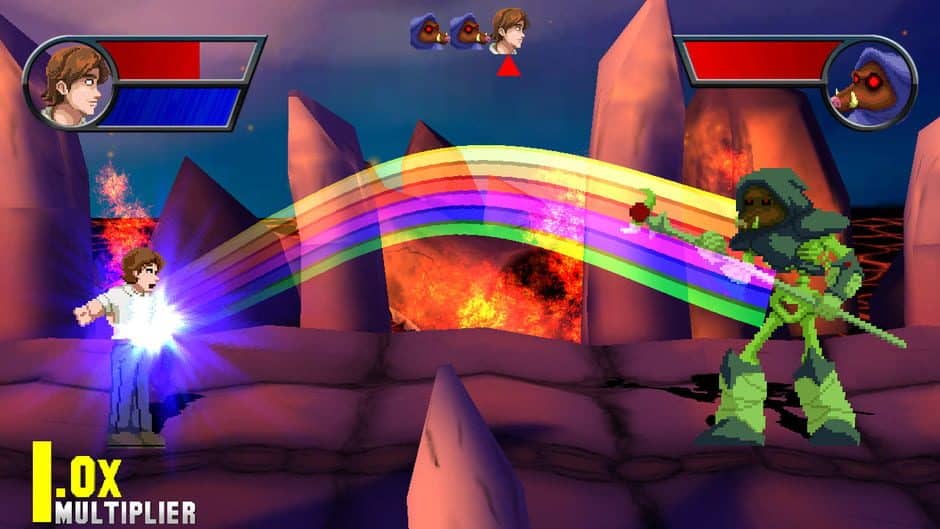