If you were following our content back in November 2017, you may remember us reviewing Super Lucky’s Tale. It is a story of a fox named Lucky who has to save his older sister who has been sucked into a world inside of books. You have to undo everything to get her back and naturally there are challenging tasks along the way. If you haven’t played the game yet and want to read about it first, click here. Today we’re reviewing the first major DLC for the game entitled “Gilly Island” (Playful Corp, $4.99) . Let’s get right into it, yes? 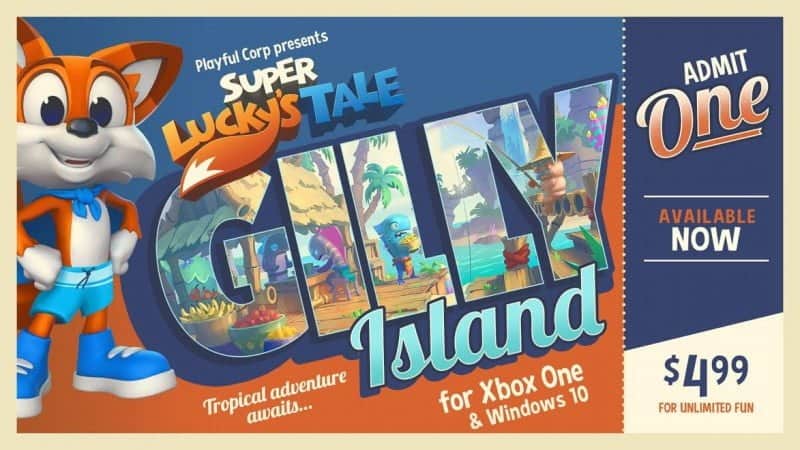 Here is a trailer to get kick this party off right!

‘Fresh from his victory over Jinx, Lucky is looking forward to a day off in good old Foxington. But the Book of Ages has other plans, and Lucky is once again pulled in, this time emerging into the tropical paradise of Gilly Island. Despite its beauty and renown as an award-winning vacation spot, it’s quickly apparent that something is amiss on Gilly Island. Lucky learns that Lady Meowmalade has hijacked the islands to throw the greatest (worst) party ever seen as she celebrates the release of her latest single. Now Lucky must rescue the islands and its vacationers from Meowmalade’s chaos before it ruins their fun and ultimately wrecks havoc to all the worlds within the Book of Ages. Join Lucky on his latest adventure, filled with classic platforming challenges, brain-bending puzzles, mysterious foxholes, and tropically treacherous obstacle courses. Meet characters new and old as you burrow your way through a sun-soaked paradise. May the luck of the clover guide your path!’

This DLC is so simple and fun to complete. On average, I’d say that it seems to be about an hour and a half of gameplay. This DLC follows the formula that the main game does. It has many more sliding block puzzles to this game as that was my favorite piece of the primary game. They have the main level as well as more 2D levels. Additionally, they’ve added 18 extra achievements into the game now. This should be great for those people who are achievement seekers. And the achievements are easy to obtain too, so that should make everyone happy. That is, they’re all easy except maybe the completionist achievement that requires 99,999 coins be collected. But I personally like that. It adds more grinding or playing the game several more times to achieve. Thus giving us players a reason to keep coming back time and again. Or maybe a future DLC will have a coin rush mode, who knows.

So all in all if you total it up, you’ll find that the DLC gets you 3 new levels, 6 more mini games, and a fun, challenging boss battle. All of the great Super Lucky’s Tale aesthetics are still there, but now it’s got that flashy summertime style! They don’t try to change any of the looks or give Lucky any swimming trunks. They knew what they had was a hit and it’s still present in this DLC.

The music! Oh boy that cat music leaves something to be desired. Since the song is part of the story it requires a boss battle to stop it. So you may hear it around the island and then you’ll have to hear it while fighting the boss. And then you’ll find yourself hearing it more than once if you fail the boss battle. It’s tough to bear, but stick with it. You just have to beat the boss and you’ll never hear it again.

It’s also worth mentioning the longer load times still seem to be there. I talked about them in my original review. They were primarily only present when you load a whole overworld and individual levels. This seems to follow that trend but probably because you can play this DLC separately.

If you just finished beating the main game, this may feel like a walk through the park. I only say that since the game got more challenging as it went on and this new DLC is probably a lot more like the difficulty at the start of the game. I would either suggest play this DLC and then play the main game. Or you could buy the DLC and wait a month and it will then feel new and challenging to you. It’s just worth knowing that you’re going to notice a significant reduction in difficulty. Maybe that is okay with a fair amount of people, maybe they just want a nice relaxing go at a game after stressing over it. I was just hoping that I could have a fair bit more challenge is all.

Otherwise, I couldn’t find much else to be considered a con. It’s pretty hard to dissect an hour and a half of gaming. But as you can tell, it has very little negatives all in all.

I mean it’s $5! If you liked the full game Super Lucky’s Tale, you’re not going to suddenly hate more content. Sure there is no major improvement in terms of what’s on the table, but that’s okay. I’m not looking for any DLC to innovate for $4.99. I’m looking just for more content for games that I already love and this does that for me. It’s not a solid 5 stars, but it’s a darn good 4. That should be good enough for the vast majority of us! I’m guessing that this isn’t going to be the last DLC that the game gets. However, I’m sure they’re judging how many people buy this DLC as to inform them whether or not to make more. I say that as long as they all stay $5, they’ll have my vote!

If you’re looking to jump into Super Lucky’s Tale, then click here.

If you really want to feed into your nostalgia, you can buy the physical version here.

And if you want to purchase the Gilly Island DLC, click here.