I was swooned and swept off my feet the very first time that I saw a trailer for Sprint Vector ($29.99, Survios). And then when I saw that it would be on PSVR I practically died. I had to get my hands on this fast paced title to see how it would play. I needed to find out and share with all of you if it’s smooth, if it doesn’t belong on PSVR, if it causes any motion sickness. Maybe it is smooth, plays well on PSVR, doesn’t cause any motion sickness, but it’s just a lame game. I’m going to go over all of the details with you right now, let’s do it! 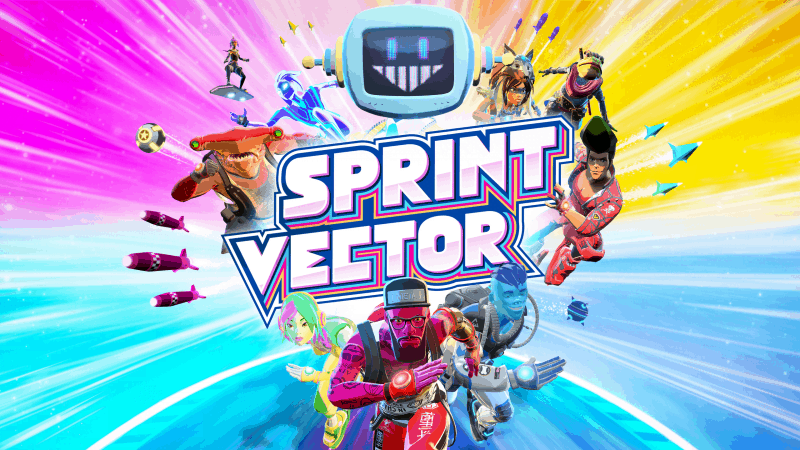 ‘Sprint Vector is the ultimate competitive VR game: a high-octane multiplayer adrenaline platformer that merges the physical thrill of athletic competition with the unhinged energy of a crazy game show. Survios’ innovative Fluid Locomotion System™ allows players to comfortably run, jump, climb, and fly at extreme speeds. Add in a pulsing electronic soundtrack, hilarious running commentary, colorful interdimensional courses, and diabolically difficult challenges, and you’ve got a hit show no matter what planet you’re on! Sprint Vector’s tech demo debuted at Game Developers Conference 2017 to near universal acclaim for its smooth locomotion system, intuitive gameplay, and infectious crowd-pleasing energy. Step into the vector blades of an
intergalactic star, rev up, and explode onto the must-see event of the millennium— but watch out! You’re always just one slow mine, nitro, or impulse jump between glory and defeat.’

This. Soundtrack. Is. Bomb. I could actually stop after those four words and move onto the Visuals sections, but I’ll expand. This game is, from what I found online, at least 43 songs deep. With a soundtrack that spans 2 albums produced by Spencer Kitagawa. I know that name isn’t a household name right now, but the kid’s got talent. I actually downloaded the soundtracks and put them on my phone because I don’t want to be in a scenario where I potentially get motion sickness listening to a song and then get conditioned to feel sick whenever I hear that song! But all kidding aside, here is the bottom line. The music is just as adrenaline pumping as the gameplay in this game. Mr.Entertainment would be so proud.

The sound effects are also tremendously cool. There are boost sounds, grunts, quips, and explosion sounds aplenty. This game is just a littered battleground of sounds but also with funny banter from our, what I can only assume are, announcers? They don’t have much purpose there other than to guilt you for playing badly. I can’t fault any of the sound effects I heard in the game especially because some of them are new, fun sounds for some of the powerups in the game. And if we’re talking about all of them in a technical sense, they very much happen in your ears where they should happen since you’re standing inside of a full 3D world. Very nice touch that it all happens where and when it’s supposed to happen. 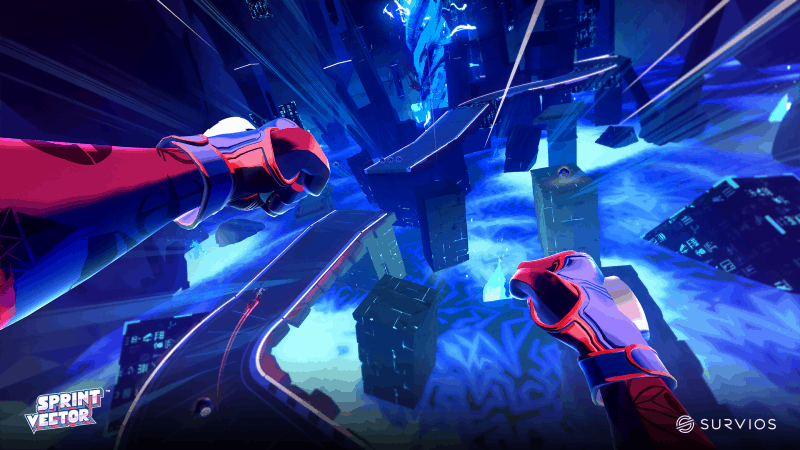 These visuals remind me an awful lot of toned down cell shaded graphics. Things like Killer 7 and No More Heroes come to mind here. But maybe it’s more than that. As an older gamer, it reminds me of the way Jet Set Radio looked. But this time you’re inside the game and you’re racing online, and they’re powerups. And maybe it’s even more than that. I thought it was a delightfully stylish touch that we have lots of shading in this world that can be truly bright and densely dark depending on the track that you’re on. I would love to comment more on the differentiation in the 12 different tracks, but as you’ll read in the Gameplay section, I couldn’t get through everything.

I also admire how contrasting the colors are against each other. Purple people on a track with brilliant neons and glowing lights next to magnificently colored powerups. There was so much of the visual spectrum on the screen at once. It’s actually hard to believe that you’re immersed like you are because the real world just never comes out this colorful. But none the less, it’s a delicious meal for your eyes. It really gets your heart racing just as much as the physical aspect of the game. 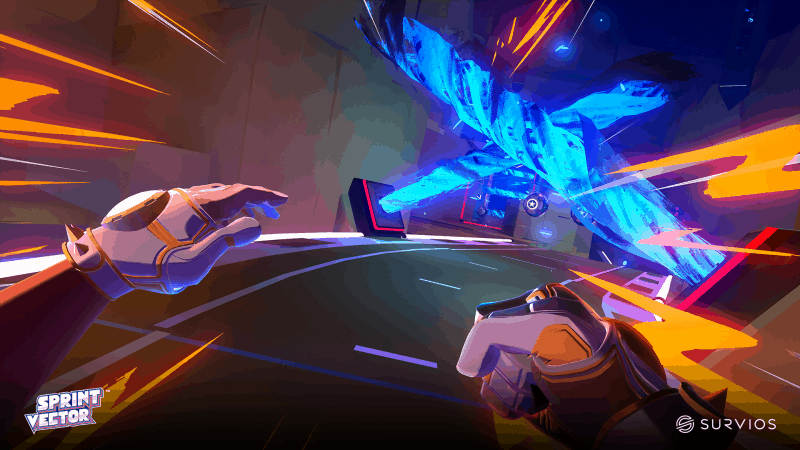 Since this isn’t a game that has both VR and non-VR gameplay, I’m not going to have a separate “VR Impressions” section. I’m just going to have everything that I would normally mention about the VR experience in here, with the gameplay.

Alright, so, let’s start with the elephant in the room, motion sickness. VR is one of those weird experiences where I definitely can play a game with no issues. However, I’ll put in another game and have a less than pleasant experience when it comes to my stomach. It all comes down to the forward movement that your eyes are experiencing versus what your body is actually doing. Sprint Vector tries to give your mind and body the movement that it needs to make everything believe what your eyes are seeing.

They try to make this happen by having you do the following. The title has you move your arms move forward and backward as if you’re running for forward motion. And then to direct you and throw objects (ala Mario Kart) it has you press face buttons so that you focus on minute things instead of sickness. In fact, small distractions can keep your mind off of the wanting to be ill. It’s a small, well-known trick that if you have a bad gag reflex and you brush your tongue while brushing teeth, to just simply wiggle your toes. Focusing on these smaller movements elsewhere in your body keeps your mind actively working on something else.

So does moving your arms to and fro while pressing buttons with your fingers help the sickness? Well. Your mileage will definitely vary as we’re all different with different experiences. But I still got sick. The issue, surprisingly, isn’t the forward motion. It’s the coming to such an abrupt stop part. If you’ve ever been in a car that was stopping and going very quickly and abruptly, it’s very much like that. If there was some way to slow me down slower while I’m on the track, that would be ideal. I understand if I go off the track and hit a tree, it will be all of a sudden. But maybe have a shoulder to the track that slows you down gently and then stops you and resets you.

But how is the game, you may be wondering. Well, from what I could muster through, it’s truly great. I know that there are tons of people that will have no issue with the forward locomotion and will have a better grasp of the controls that I did to get to stay on track and stop easier. The grand tracks truly put you in a world that you never thought that you’d be inline skating through. The items are a delightful treat (but if you get hit with one, it could be jarring to your belly) and tremendously satisfying. The game is longer than I could physically stomach, but that’s what makes it great. There is the world’s loosest story around it all, featuring a man who’s forcing you to play? Mr.Entertainment isn’t much of a diabolical baddie as he is as just a figurehead for the game to give you purpose for racing.

For me, all in all, I couldn’t find much bad to say about the game except the mechanics of stopping. I want to keep going back to it and maybe mastering it until I can actually play it. I would say it’s an experience akin to a roller coaster ride. Sure, you’re bound to get queasy, sure aspects of that are scary, but it’s so fantastic and unique that I have to keep going back no matter my experiences with it. 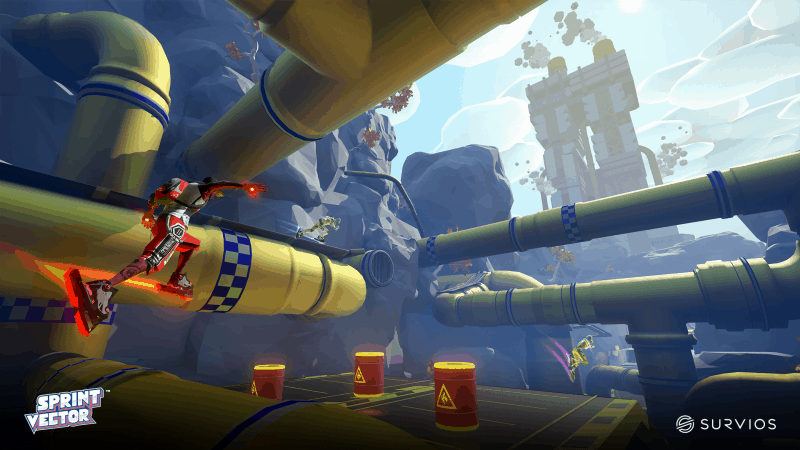 In its vanilla form, the game is pretty decently long. Yes, you can go through and just play the tracks and cups once and beat it all. But that takes practice and a willingness to potentially get sick. So I doubt that you will do that. When you first get over the first opening cutscenes, you are given only 2 modes, Tutorial and Skate Park which is it’s main gameplay section. However, within its gameplay mode, there are online competitions and offline races. It’s all very Mario Kart from its various modes like Battle Mode (but sans Time Trials) to its gameplay.

I mention it’s “vanilla” form because at the time of me writing it, they announced the game will be getting weekly player challenges. That will extend the gameplay as long as they continue to support it. My guess is that it’s not technically DLC as they’ll most likely use the current tracks and craft challenges in them. This would most likely be time trial challenges as well as that’s an easy thing to challenge someone with. But I’m also guessing things like ‘Throw 20 items in one 3 lap race” and creative things like that will appear. 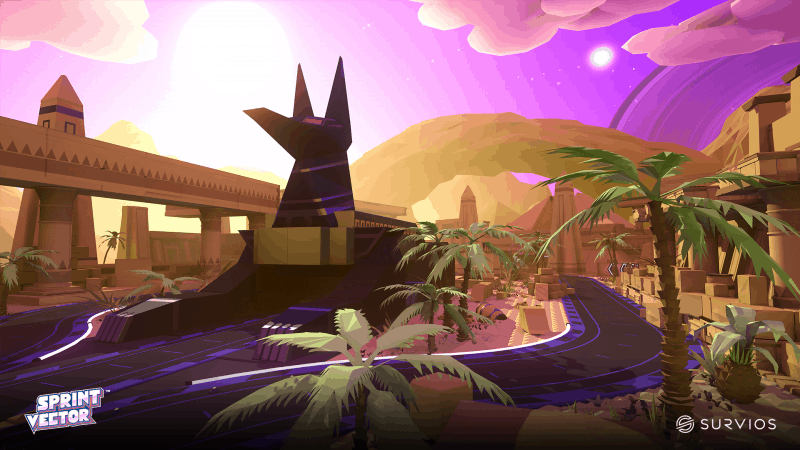