Here at Hackinformer, we review a lot of Switch games so that you can make certain that you only buy and fill your limited Switch space with good games. Today we have another game to satisfy your wonder, and that game is Qbik ($4.99, Forever Entertainment). Some of you may know that this game previously was released on Steam for Mac, PC, and Linux. What kind of game is it? Does it play well on Switch, or should you just get the Steam version? Does it look better docked as some Switch games do? We’ll talk about all of these and more, don’t worry! 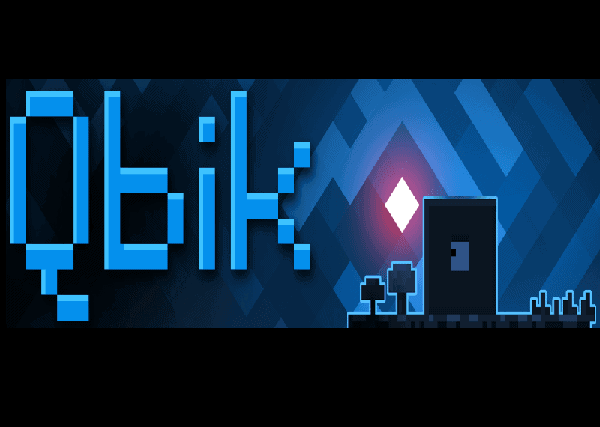 ‘In the beginning, there was a dot, levitating in white nothingness. Eons have passed and nothing has changed, but the power of creation was slowly stirring within the dot. And this is how the adventure begins!

Qbik is a beautifully designed pixel-art puzzle game. Enter the world of Qbik and explore a square land full of brainteasers, puzzles, and riddles – traverse all 63 levels and discover the origin story of this square little fella!

But that’s not all, folks! Qbik gives you the ability to make your own cave in the Level Editor! Put your designs to the test on Steam Workshop and play on other players’ levels!

Use every brain cell you have to help Qbik navigate the caves. Dodge deadly traps and use technology in your favor so you can eat every yellow block (hopefully they’re gluten free!) and move forward into the unknown!’

The soundtrack to me in this game is certainly a surprise. The whole game takes place in deep, dark caves and somehow, the music, it compliments it in a strange way. It’s more like soundscapes sometimes and other times it is definitely a low musical number. I think that my favorite part about the music is that it’s just as ambient as the background color in the levels. What I mean by that is just that when you have background color, you barely pay attention to it, but subconsiously it’s still setting a mood. It’s still informing you of what you need to know for the setting. That is what the music does for this game and it’s cavernous levels.

The sound effects though are the tricky part. It’s nice in the beginning to hear the cute eating sounds that our cube shaped character makes-it is not so much as you go along. He makes a loud pop sound that people usually make with their lips, you know, the one that kind of sounds like a tennis ball being hit by a tennis racket. Whenever the character speaks, he makes a very gross, sloppy, spitty sound. But luckily there is a speech bubble that appears. This is a personal relief to me because, while it’s funny to hear sloppy sounds, I think if they had the character audibly speak with those sounds, I might just gag!

I am sad though that this game didn’t take advantage of the opportunities that it has. And who knows, maybe they’d add these in the future, but I had some suggestions. I thought it would be better that if you were near an environmental object that it make some slight sounds. Like for instance in the picture just below this section, you’ll see a spider and bubbling lava. When the character nears or passes those things it would be nice if they made some low level noise to really add to the fact that you’re in a cave. I think this game has tons of subtlties so if those things do indeed make sounds, they’re too subtle for it to be audible on the undocked Switch speakers by default. 7/10 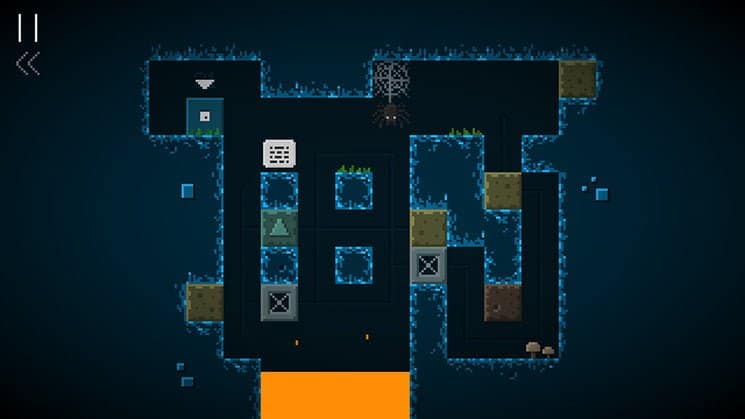 There’s a nice balance of black, blue, brown, and grey here. It adds to the bleak setting of the game quite nicely. It also means that whenever a unique color is introduced, like the aforementioned lava, it adds a nice pop of color. I would say that the only thing I felt that was missing visually was on account of the lava. Lava is bright and hot and thus introduces light into an environment. It’s not a lot, but it is enough to illuminate the area around it. In this game, they just portray the lava as a neon orange mass with little embers that float up and down. I thought it would be fun that as they floated up, they illumniated the blocks near them or something. But I understand the need to keep the game as simply as possible.

Nevertheless, I have nothing but admiration for the team at Forever Entertainment when it comes to these visuals. The level is so much more than just the puzzle of differently colored blocks and the occasional spider. They add elements of machinery later on and so much more. But even the background and cubes that you can’t interact with and such just add a level of depth to this fully 2-dimensional title. And since the caves can be in multiple “locations” they can be decorated differently than each other one, thus breaking up the monotony of being in similar looking dark caves.  7/10 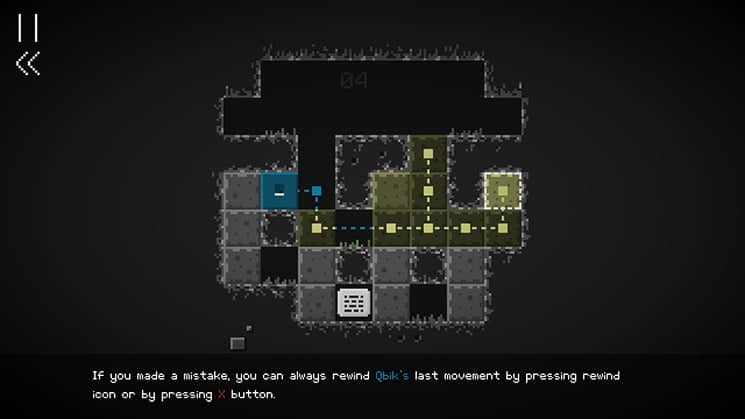 So Qbik is a title that is sort of an action puzzle game. It plays similarly to BoulderDash and other clones of that in more recent years. The main objective of the game is to be a cube guy and eat cubes that are in your way. There’s only certain colors of cubes you can eat. They all have different qualities like dropping down due to gravity or staying in place because they’re connected to the earth (clay). Later on in the game there are mechanics for pushing and teleporting as well. You’ll need all of it to finish a level. There’s also a loose story line surrounding Qbik and his adventures underground. It was definitely something that you don’t have to pay attention to if you just want to play a puzzle game. You definitely don’t need some kind of ambition to drive this character to eat blocks.

The puzzle of each level comes from eating all of the correct green blocks in the fewest amount of moves. If you make a mistake or mistakes you can use the rewind button to go back. If you want to start the level over entirely, you can. There are a limited number of skips in the game if you want to skip over a level entirely. There is an overall ticker that is keeping track of how many pushes, eats, rewinds, restarts, teleports, distance, and editor blocks you’ve done overall.

Is the game any good though? I certainly love a good, challenging puzzle game, but this one is very challenging. I definitely found myself just wanting to give up on levels. My guess is that the only reason that they added a skip feature is so that people like me couldn’t give it a bad rap. Or people that love this game don’t get stuck and just get to continue on by skipping. I would love a feature that if you skip a level and come back to it later to play it, you earn your skip back. I would get so tremendously frustrated at times because my preference is to complete every level in a game before reviewing it without cheating. So I sat there and struggled and audibly grunted when I wasn’t figuring it out and assuming that I tried all scenarios.

I would finally acheive the solution and not feel anything but bummed that the next level would be equal to or more difficult. I never felt a sense of satisfaction after completing the difficult levels. It’s a very challenging $5 game, so even though I hate it for being so challenging, I understand it took a lot to make such hard levels. And I realize that that makes it a good game especially for the value. 7/10 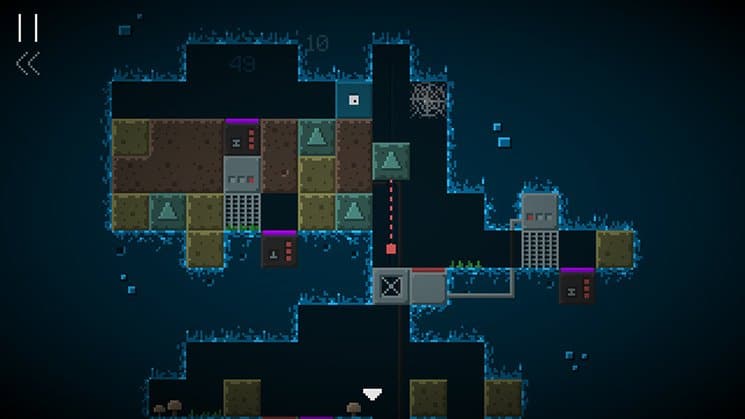 Qbik is a very long and challenging game. As I mentioned before, the levels can have you stuck. But let me elaborate, I was stuck in one level for an hour. Another one was 15 minutes, another one was 30 minutes. I expected all of the levels to be as easy as the first few levels that I completed in less than five minutes. But now let me go on to bring up the fact that this game has 63 levels in it’s entirety. Imagine if each one was 15-60 minutes! This would be a long game. And really, that all comes down to the player and their problem solving abilities. You may finish every single level in five minutes and be better than me. Even that means it’s a 5-6 hour game. But the fun doesn’t stop there!

You can play through the entire story line first. If you skipped anything or if you want to play certain parts of the game again, then you can by visiting the Chapters section. This lets you look at every level and choose which ones you want to play. Outside of that, the game isn’t over still. In fact, the game could technically never end because built into this game is a level editor!

That’s right, the thing that I think that most video games should do is being implemented here in Qbik. You can create levels and then pass them to a friend or family member to play and then vise versa. But Forever Entertainment has a growing community to share with as well! This means that the levels and options are limitless! The only downside here is that if nobody buys this $5 game and creates levels to share, then you may just be stuck with replaying the standard 63 levels.9/10 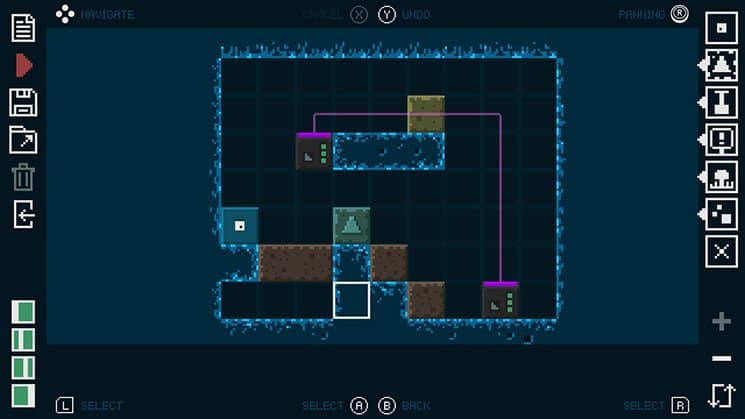