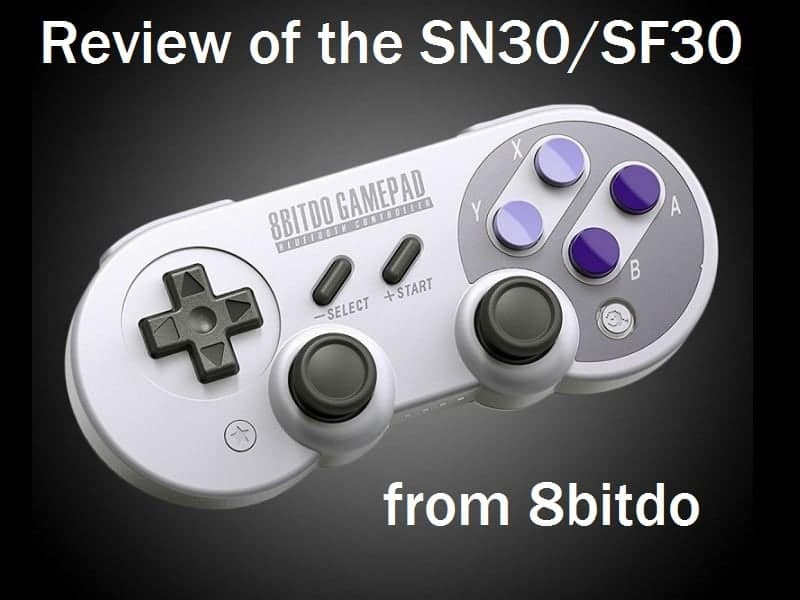 We here at Hackinformer absolutely love getting our hands on new tech and accessories. And when I finally was given an 8bitdo SN30 Pro gamepad, I was absolutely ecstatic and decided I wanted to review it thoroughly. This controller has been out for a little bit now, but that doesn’t mean it’s so outdated that you shouldn’t read this review and not get one. On the contrary, this controller is fully featured and deserves a good look at by you! So with that in mind, let’s hit it, my friend!

Description of the SN30/SF30 Pro from 8bitdo:

‘The one controller to rule them all. We set out to design a fully featured retro controller to play 30 years of video games. With inspiration from the classics. Designed with the utmost attention to detail. We paid extra attention to the most critical characteristics like the d-pad, to make sure it feels exactly like you remember it.’. 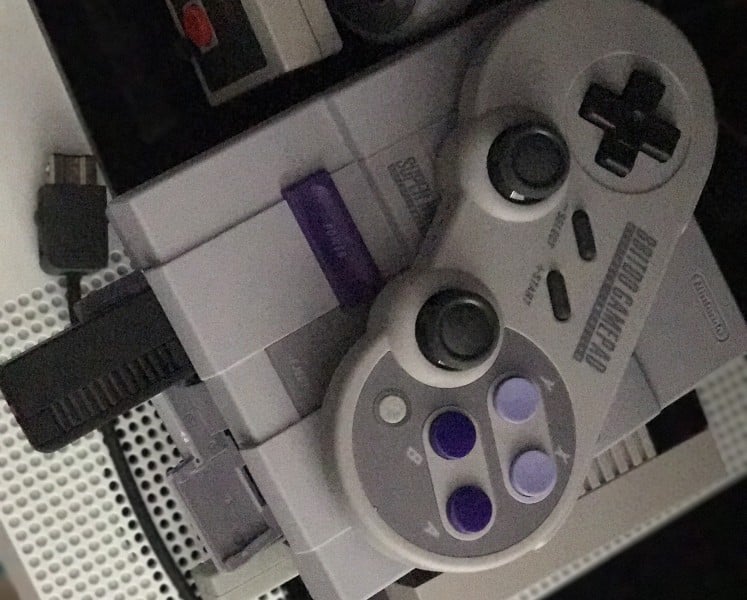 Let’s talk about what’s on the controller, shall we? Looking at the front of the device from left to right, we have a D-Pad for starters. It’s followed up by the Start and Select (- and + buttons on the Switch) as well as the standard ABXY face buttons. Underneath the D-Pad is the Star button, on everything except the Switch that is the Turbo button. So we’ll call it that the rest of the article. Underneath the face buttons is the 8bitdo themed Home button. I’m glad they didn’t just stick with the standard go-to of a picture of a house. Lastly, under all of that is the 2 thumbsticks that they have added to this controller. The thumbsticks are not smooth to the touch either, they added a little bit of texture to the already rubber sticks. A very nice touch.

On the backside of the device, there isn’t much to look at. This device does not have removable batteries so there is no battery door to worry about breaking or falling off. There is a standard sticker on the back with info about the product. It also contains a nice little cheat sheet for how to connect it in Switch, MacOS, X-Input, and D-Input respectively. This is so that you don’t have to memorize the four different button combos that exist for the four different scenarios. You also wouldn’t have to keep the manual handy either. You simply just flip the controller over and look to see which button combination you need to use to connect it to whichever device you’re wanting to pair it with. The last part of the back that you’ll notice is that it has 5 hex screws. This means that not a tri-wing screwdriver, a flathead, nor a Philips is getting you into this controller. 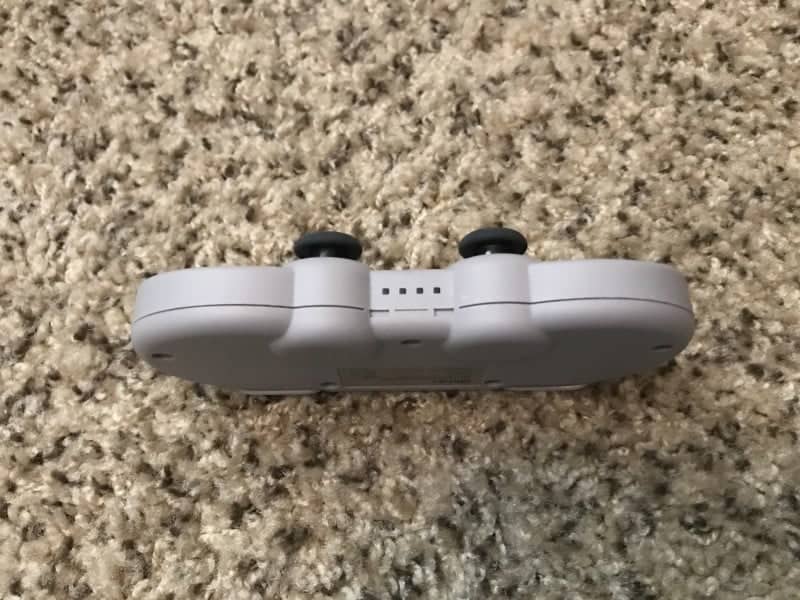 This device is made out of some seriously tough, hardened plastic. This SN30 Pro has been dropped countless times since I’ve opened it up as an early Christmas gift (don’t tell my girlfriend). I spilt a little bit of my water one day on the table where this and a magazine were resting. The controller wipes off fine, the sticker didn’t get ruined, and it still plays great. The magazine on the other hand…well it was out of date anyhow.

The coloring on the SN30 Pro is the beautiful purple and grey that we Americans all know and love. The SF30 Pro is the exact same controller in every functional aspect, but it has the color layout that Europe, PAL, and Japanese territories saw. Both are beautiful in their own way and I plan on owning one of the SF30 Pro very soon! I do sort of wish that they made these in NES and Famicom colors as well. I think that they lend themselves nicely to that and since they already work on NES Classic and Famicom Classic, I think it’s a no-brainer.

The battery life is pretty good. From my tests, it lasts roughly 15 hours. The charge time is about 2 hours at maximum. My suggestion to any gamer out there is to simply play 7 hours one day, 7 hours the next, and then charge it. You’ll find you’ll get better mileage out of it if you don’t sit and play it round the clock. I mean, nothing is more annoying than playing for a long time just to be interrupted for 2 hours.

Lastly, the buttons are the coup de grace here. These things feel and hold up just as well as the SNES controllers that I got on my SNES from back in the 90’s. Now clearly, I can’t test that they will hold up for the next 2 decades. But in the meantime, I couldn’t get them to move any strange way or fall into the controller. The D-Pad is raised like precisely to the same height as the original D-Pad was, so nothing feels out of place. The thumbsticks, while not used by many Nintendo purists, do indeed work on the NES/SNES Classic. Of course, they also feel great when playing them on new games that pretty much require the thumbsticks. They are shorter though, so if you have big hands or expect a lot of thumbstick travel, this will not be for you. 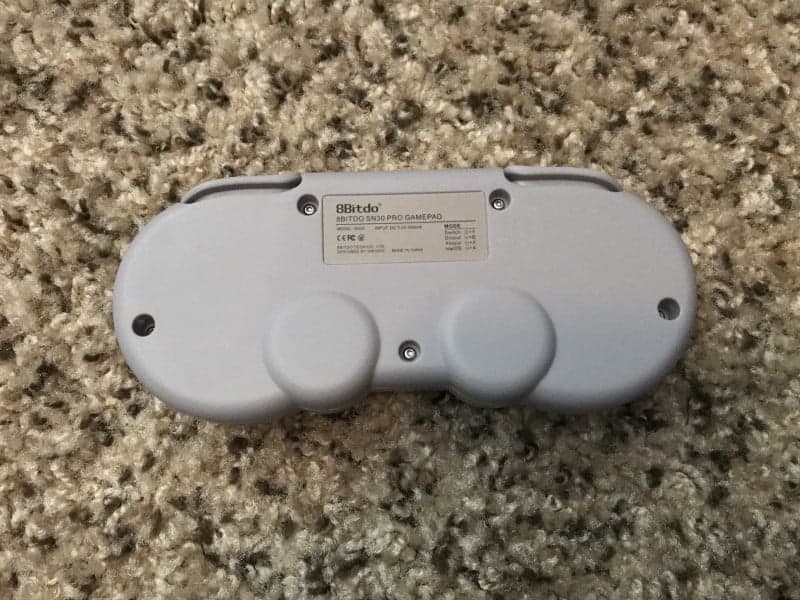 Let’s go over the features that 8bitdo advertises really quick and I’ll make mention of anything else you may need to know. 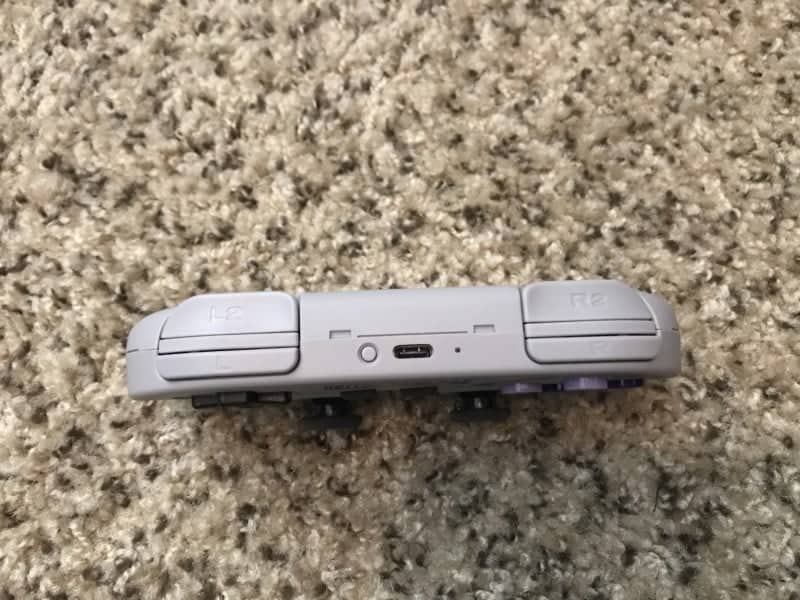 The supported devices are many! Basically, anything that uses the 8bitdo Bluetooth adapter, supports 3rd party Bluetooth controllers, PC, Mac, Android, Switch, NES Classic, SNES Classic, Analogue NT, Analogue Mini, Analogue Super NT, Wii, Wii U. It has 4 officially mentioned options; X-input, D-input, Mac mode, and Nintendo Switch mode. If you have anything, anything at all that is any of those, then this controller is for you. If you are one of those lucky humans who own an Super Nt, specifically the standard grey and purple Analogue Super Nt, do not get the matching controller that 8bitdo makes. I’ve seen too many negative reviews for those controllers. Get this SN30 Pro instead, it’s great, it has fantastic reviews, and it only costs $10 more (a little bit less if you use our code on Play-Asia) than the matching controller.

Everything works on everything that I could test it on. The only downsides I found were on the Switch, specifically that it has no NFC support. But most 3rd party controllers don’t, especially ones that support practically every system. I was also extremely saddened to find out that the Turbo functionality doesn’t work on the Switch. Out of the box the adapter that I bought that works on NES/SNES/Wii/Wii U didn’t work. Or maybe it was the SN30 Pro, but what I did was to update both the controller and the adapter and then they synced up immediately. And I mean, I noticed no lag at all! So as soon as I pushed the proper button to get them to pair up, they were instantaneously connected. 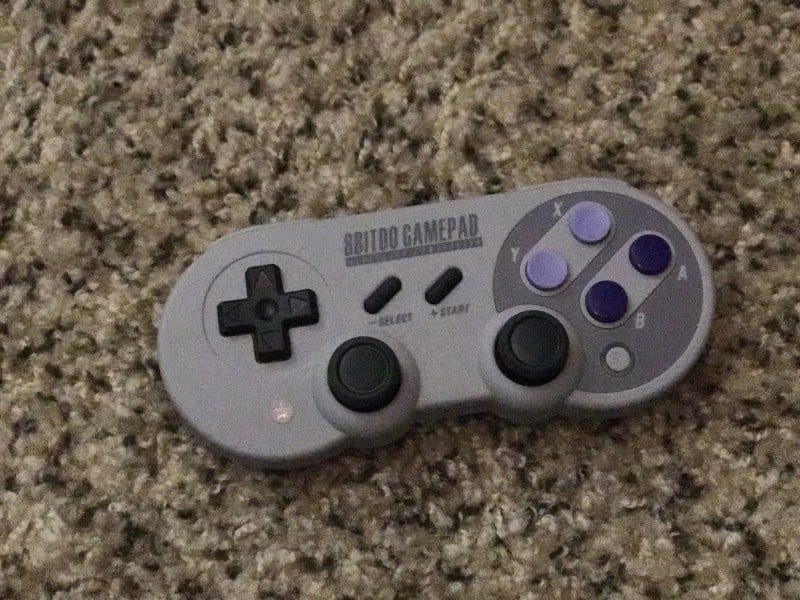 If you want to buy an SN30 Pro right now, click here and use promo code INFORMER for some money off!

Maybe you’re interested in the SF30 Pro, click here, and use promo code INFORMER to save money!

@V1RACY
Previous PS4 All In One Game Dumper for FW 4.05
Next Switch Review:Qbik