Ultimate Chicken Horse (Clever Endeavor Games, $14.99) is out now on consoles as well as Steam. This title is intended to be a crammed and jammed mixup of Chicken and Horse that’s been chopped and screwed to be a mish mash of hilarious fun. Is it all fun and games though? Does it hit the spot for lovers of Chicken and/or Horse? Don’t worry, we’ll find out together! 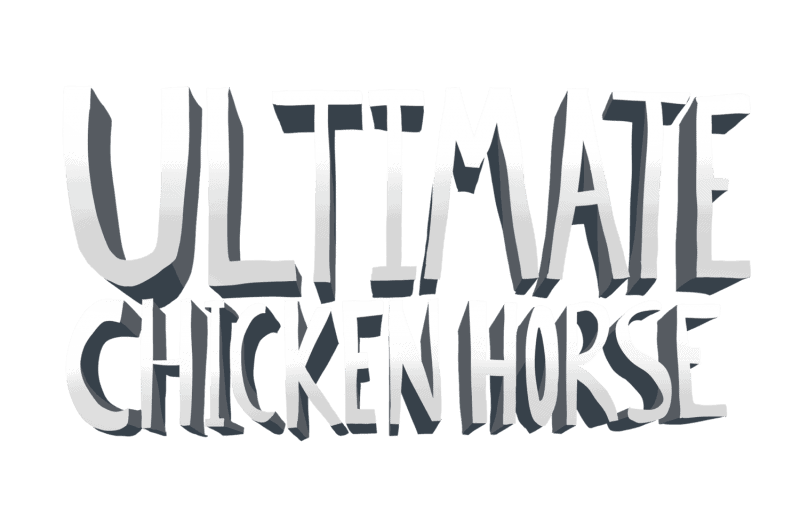 Here’s the features of the game for you:

And the all too important trailer (remember it’s also on Steam and PS4):

The soundtrack is snazzy and fun as heck! As soon as the game comes to the start screen, you’re greeted with an upbeat jazzy tune. I tried to sit and listen to the whole thing, but if it ends (which it must), I couldn’t really tell where it did. The music in the rest of the game is very mild and off deep in the background as to not be distracting. Honestly, I really, truly wish that every game did this. I need to be able to hear the traps and characters more than I need background music in the foreground. Best of all, Iknow that the game has multiple songs, but I couldn’t really tell if the game had a lot of music or not as the music was off in the back. And in a game that is meant to be played time and again, this is a great idea.

Speaking of hearing the characters, this game has voiceovers for the animal characters. It’s not like they speak English or anything though. They have grunts and squawks and things of the like. They even scream bloody murder as they fall down to their respective deaths. This game has plenty of animals too, some of which rarely ever make sounds, so they had to get creative. The sound effects for the explosions and saws as well as other traps sound nice too. Again, I’m ultra glad that the devs decided to make those trap sounds be ahead of the music, but they didn’t make the game scream annoying sounds. All in all, the game isn’t going to win any awards based on its voiceover work, its musical arrangements, or even its sound effects. But it does what it needs to do to give you a good laugh. If they had had real animal sounds in the game, I would’ve been less than enthused. 9/10 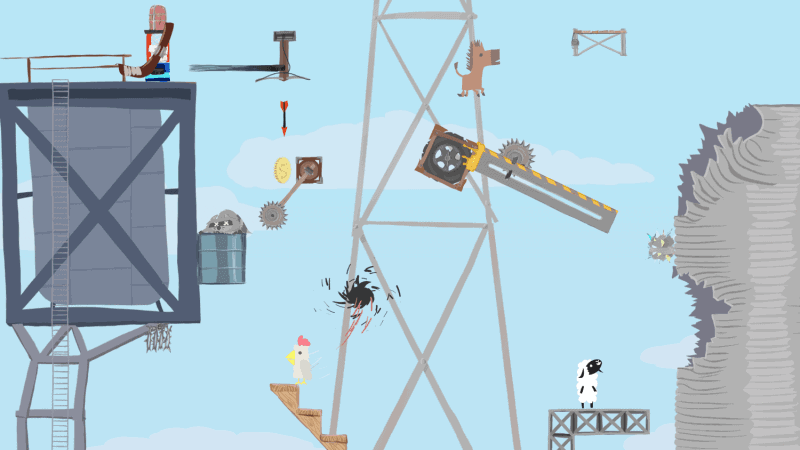 The visuals are so gosh darn cute in this game. Everything is 2D of course, but it all looks like the older flash games that may have been featured on New Grounds or something. I love how they created countless different traps and elements that all have a uniform look too. This goes the same for the character customizations. Heck, it even goes for the characters. They’re all unique in their own special ways, but they all have the same style and fit together in the same “universe” as it were. My favorite character in terms of looks was the Chameleon. He didn’t just have the best looking dance animation, but he also would change colors while doing it. Not to mention that you can further customize him with unlockables. Everyone will have their own favorite animal I’m sure, but I also thought he was the least annoying character.

The downside of the cutesy, high definition, two-dimensional characters and levels is the flatness. Now I know that 2D objects have to be flat, and don’t get me wrong, they look good. But that, to me, made me feel like I was bound to miss my desired landing target when I was jumping. This game could remedy this by making the camera be in tighter. Or, just show the screen around where the character is at the time, like in New Super Mario Bros. This means the camera just moves left to right with them. At the end, after the round, just show us a replay. Or don’t, it doesn’t really matter. It would only matter if we needed to know where our opponents were compared to where we are. But we don’t because there is no collision with opponents. If that got fixed, I would be a lot happier with the visual aspects of the game. 7/10 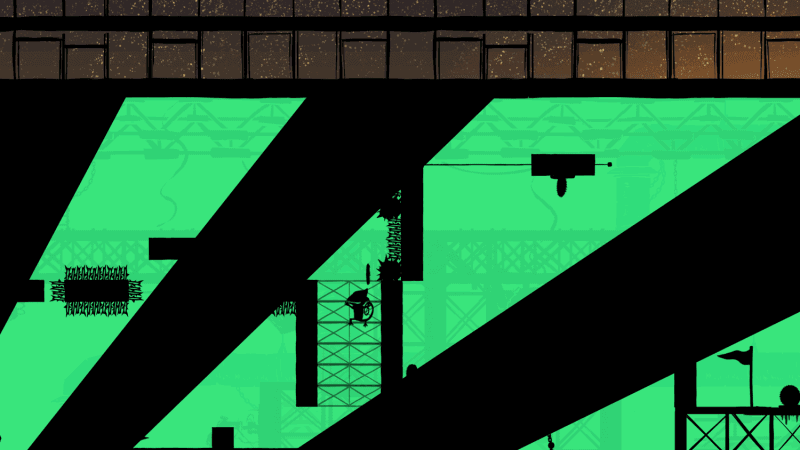 The initial loading screen into this game is unusually long for a game with limited audio and 2D assets. When you finally get to the main menu’s user interface, you may find that it’s cute. As true as this may be, I feel like younger audiences may have a harder time discerning what the heck is going on. Each menu screen is different, some require you press B to return. Others require that you hold B to return. There are a lot of mouse cursors instead of a simple up and down motion on the menus. Mouse cursors are really the pits with a thumbstick. If you’re in the search results for a party and you find one, you’ll be taken to a screen where you get to choose the character and level you want. However, if you’re booted from the character screen, it doesn’t just boot you back to the search screen. It doesn’t even take you back to the primary main menu. No, it kicks you all of the way back to the screen where it tells you to press start. What’s worse than this is the fact that if you aren’t booted out of the character select screen and you simply back out on your own, the same thing happens! There definitely should be an option when you back away from the character select screen asking if you want to return to the search or just go back to the main menu. Especially because you can be booted from a game lobby before you ever have a chance to enter the lobby.

The gameplay itself, however, isn’t overly complex, all things considered. You play multiplayer and choose animals as your characters. The goal of the game is to each take a turn putting an obstacle, coin, or platform between the start point and the goal flag. Each of the players gets a turn to add and/or subtract from the stage. After everyone has placed their pieces, they then can walk, run, and jump their way across the stage to get to the goal. The first to five points wins, and the odds of someone getting to five points first is very low. This game not only requires that you add a fair amount of crazy traps to the stage, but you also have to be able to get over the opponents traps as well as your own.

Quite frankly, the game is easier to learn just by playing a few times in a row. There is no real penalty for losing. On the contrary, the game seems to congratulate you on trying and giving it your best. The game starts out with a few characters unlocked, two levels unlocked, and no character customizations. As time goes on, you’ll unlock more items for the game. It’s not based on the number of hours, but rather the random surprise boxes that appear in a level. If you get to one before your opponent, the game will give you a random unlock! It’s a great system because it encourages you to play the game more and more. But what I’ve found is that not every level has a surprise box. You have to understand that you’ll get surprise boxes when the game wants you to have them. And even when you see one in your stage, it does not mean that you will get it before your opponent. So try not to rage quit if you don’t get it.

As far as the mechanics of moving your characters across the stage, you can walk just by moving your thumbstick or by using the D-Pad. You can run by holding the X button on the XBOX One controller. And jump is as simple as pressing the A button. The jump distance takes some getting used to at first, but it’s hard to practice. I say this because, in a game like this, every move counts and a single misstep could land you dying for the turn. But after a handful of turns, you should eventually get used to the jump function. The animals all jump the same way. There’s no flying mechanic for the birds or long distance jumping for the horse. The best thing that I noticed that the game does have is a wall jump feature. So if you hit a wall, like the New Super Mario games, you should be able to jump off of a wall.

This game can be boring at times, I will say. In fact, with just one opponent online, I had the most boring time playing this game. The second hour I played I was laughing hysterically at the many deaths that me and my opponent were experiencing. It’s so hard to know if you’ll have a fun time playing the game because it depends on your opponent, their creativity, how many opponents you have, how much stuff is unlocked, and their internet connectivity. I have one thing to say, as I feel as though it was designed with online play in mind. I found Ultimate Chicken Horse to be a totally playable, charming game but only offline with my friends. You may not have the same experiences, who knows. This game has a lot of variables in play. 6/10 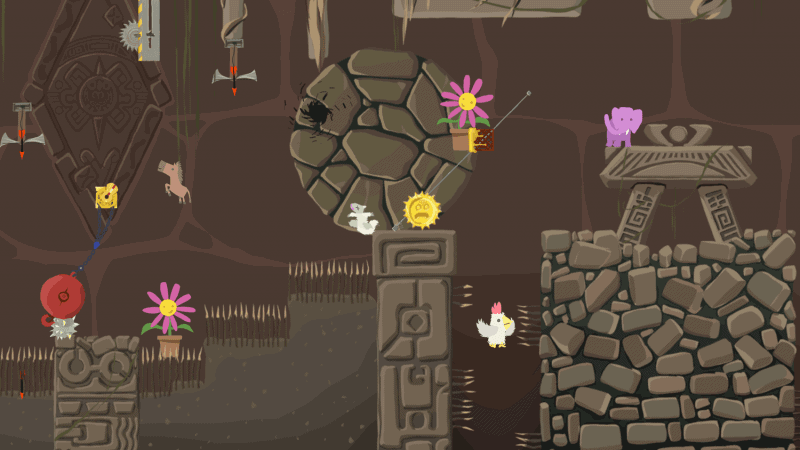 This game is only creation based, so it will never technically end, so that’s on its side. There is more stuff to unlock for this game than I can even imagine or count. This game may very well be the first game I’ve ever given a perfect score to in the ‘Replay-ability & Longevity’ department. Heck, there isn’t even too much to say that hasn’t already been said, so I’ll keep it brief. In the time that I’ve spent thus far in this game, no two experiences were alike. Even if I played the same level with the same people, I never found anyone repeating methods that helped them win in the past. This is due in part to the randomized traps and platforms. But it’s primarily due to the fact that nobody seemed to want to repeat anything. Everyone wants to be creative and build offensively and defensively. Furthermore, you can just blast their traps away and ruin their whole plan. So all in all, you get a unique experience every time that you play the game. And that means it gets a perfect score in this field. 10/10 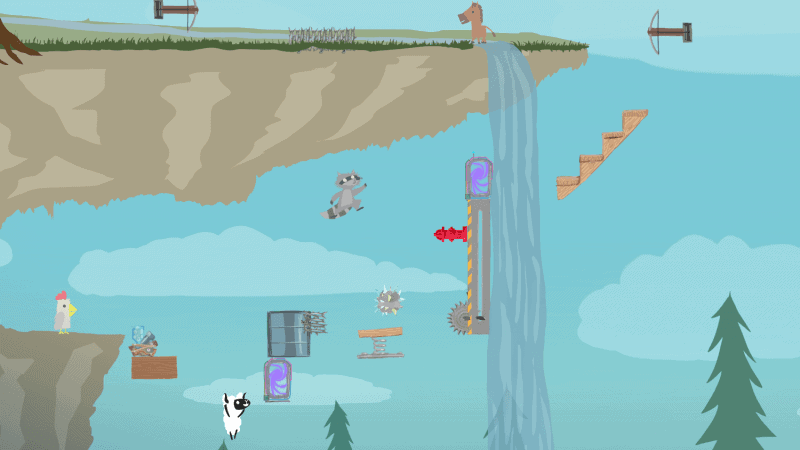