Review of Crimsonland for the Switch

Out now, Crimsonland (10Tons. LTD, $13.99), is a twin stick arena shooter brought back from the dead. And by that I mean brought back from 2003, then to 2014, and then again now! This cult classic has had a steep following for a long, long time. But does it translate well to the Switch? Does it still have that grueling, murderous, magical spark? Man up reader, because you’re about to find out. 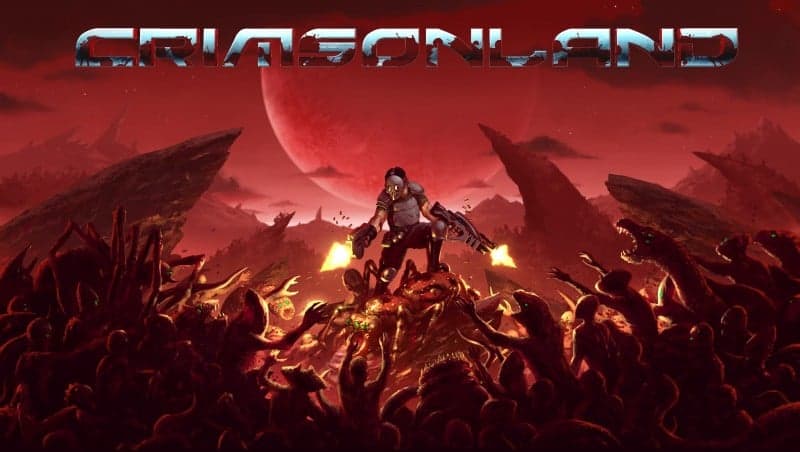 Over 30 weapons including this massive Triple Ion Rifle
Compete with your friends: Leaderboards (and achievements on Steam and PS4)

Countless perks…and one which makes you feel empty inside.’

And a trailer to get your red succulent blood pumping:

This game really thrives on its weaponry and perks. You as the character essentially do not change throughout the entire game. So since the game is based around tons of guns and perks and enemies too, there are a lot of sounds that need to fill that space. There are well over thirty weapons in this game. Even though a fair amount of them have bullets, they all sound different from each other. Flamethrowers, shotguns, laser guns, sniper rifles, and much more are featured here. The game does a fantastic job of making each sound different and unique. This holds a lot of weight throughout the game as there isn’t much in way of music.

I can’t be too terribly hard on the music, I’m sure that it’s there. But the sound of sheer bullets and explosions, it’s just too hard to hear or to concentrate on for that matter. Does that mean I forgot about the musical compositions in this game entirely? No, not at all. But since I couldn’t really hear it over the warfare and I know it’s there, I’m going to definitely be easier on it. You hear it in the short menus between levels or when choosing the gameplay type. It seems to be a song on a loop that runs similarly as maybe the song from Doom 3. It’s got that heavier guitar and tom drum vibe going for it. I do have a sweet spot for that kind of music as it was far more prevalent as I was growing up. Of course, that was 2004 and so this song definitely sounds like the year that it came from. But if you’re okay with some low volume, heavier music in the background, you’ll be alright with this. If it does play while I’m shooting up baddies, I do not hear it at all, and that is totally acceptable. However, I really would love to hear it come in over the killing! 8/10 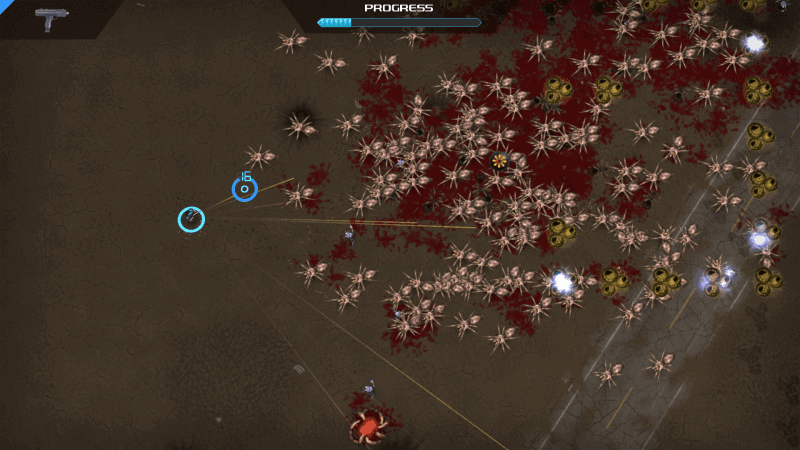 The visuals are from 2004 ladies and gentlemen! There isn’t a great deal to say about it. My guess is that they cleaned it up and made it more HD, though. They wouldn’t just bring a game straight from the past and let you play it on an HDTV of today. The game would’ve looked pretty grimy, to say the least. Everything that I saw on screen was clear and easy to make out. Even though you’re up above the events transpiring, you can easily see the differences in the enemies. They come in different species, but also different shapes, colors, and sizes. The reticle and other powerup options are easy to spot as well. The only hard part is when you start to have a blood-soaked ground and some of the smaller creatures cross over the blood. It makes them hard to spot, but my guess is that that is part of the challenge.

I like the fact that the HUD is minimal, something that I feel is a standard anymore. The developers took the time to minimize the amount of clutter on the screen so that you can see as many enemies coming from the outside of the viewable area as possible. They couldn’t get rid of all of it, of course. Although I certainly wish that if I’m not going to play any co-op whatsoever, I could get rid of the “Press Fire to Join” graphic that appears in the other three corners of the screen (not shown in the screenshots on this page). It should simply ask you if you want to play single player or arcade co-op where players can jump in and out. This way if it’s single player only, those graphics would be gone from the corners, giving me some more screen space back as the player. 8/10 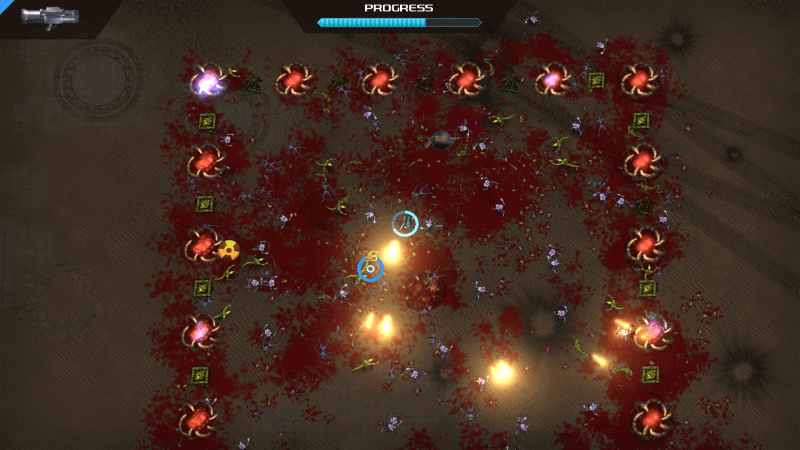 This title has a lot to it. As I mentioned in a previous section, you have countless weapons in this game. You have a plethora of fun perks and powerups, some of which even change the weapon that you’re carrying a bit. The game has more than just one campaign mode. You have a Survival mode as well as a Quest mode. The Quest mode has 50 levels in it and if you complete all of them, you’ll unlock more types of Survival mode along the way. Best of all, you don’t just have one difficulty to the game, you have three solid options to choose from. Essentially meaning that the Quest Mode alone is 150 levels.

The whole game is a top-down shooter as 10Tons LTD. has been bringing to the Switch scene. There really is no more explaining it than that. But the game is pretty great. It is one of the more classic style where it’s just you and the monsters. There are no walls, there are no objectives, just plain unadulterated havoc. In the Quest mode, you have waves upon waves of a predetermined amount of enemies. The types of enemies that are sent at you are also prechosen. None of the quests are randomized. Your progress is indicated on a progress bar at the top. Your remaining bullet count in your weapon is indicated on your reticle. And your health is indicated on the circle that surrounds your character. Different enemies can do different amounts of damage to you, so it’s not like there is a certain amount of hits and then you die. That would simply be asinine. They took the smarter route when deciding how the character will take damage.

I don’t know if people that are gamers now will enjoy this type of game. It’s just so deeply rooted in the past, giving it makeup may not make it appealing to newer gamers. I liked it though, but half of that may be because I’m now in my 30’s. I find it to be addictive and teaches you how to think on your toes. It doesn’t hold your hand through any of the game either. Ultimately this game gets good the harder it gets. In the beginning, it may feel like a cakewalk. Towards the end, or on harder difficulties, is when you’ll start having a smile on your face while you’re mowing all of the enemies down. 8/10 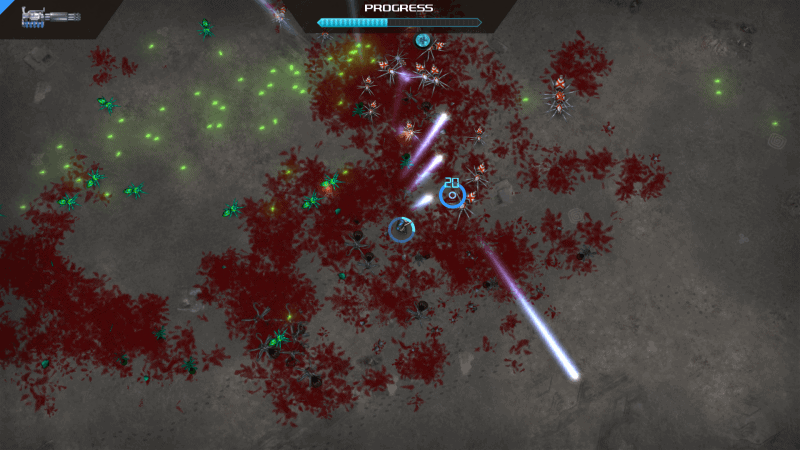 This game has so much stuff in it, I found it hard to keep track of all of it. There are quests and there is survival. Each has several levels and multiple difficulties of each level. As you play through the game you unlock even more gameplay types. You can also play this game co-op with your friends. The co-op seems to be up to four players at a time. This is far more feasible if you’re playing in docked mode though. I wouldn’t even bother playing with three other people on the smaller Switch screen. And I mean that even if there is friendly fire, as you’ll still be accidentally shooting at the wrong thing still and wasting your bullets and time.

Replay-ability outside of the of Quest and Survival is slim, but as I said, the game has a lot of content in it. And the title is delightfully challenging too. That alone will help encourage you to want to play all of the game type’s levels across every difficulty, thus increasing the value of the game. I found the game as a good way to pass a lot of time for the player. It also has a great pick up and go and play in your spare time sort of quality. If you play the game this one, a level here and there, your experience with it is going to be even longer. 7/10 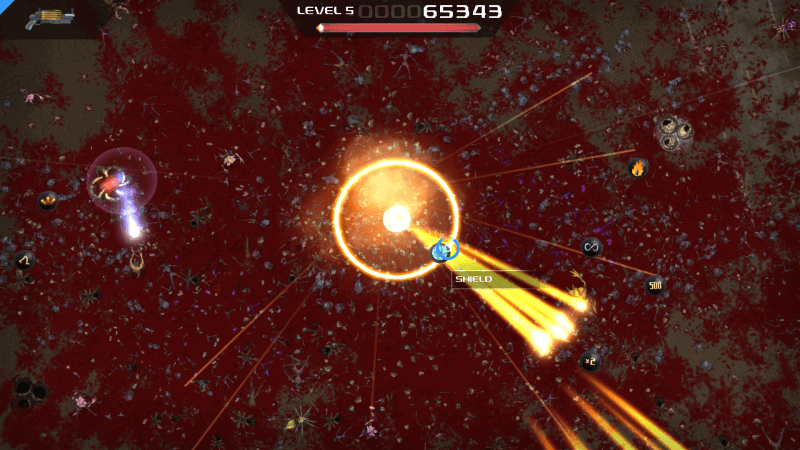 If you’re looking to get your gritty, grimey mittens all over this game, click here!

If you need to buy $20 of eShop money to cover the cost of the game, click here.