Neon Chrome ($14.00, 10Tons LTD.) came out earlier this year for Steam and then followed the releases on PS4 and XBOX One. It was highly requested from the fan community to have this game ported to the Switch. 10Tons LTD. was clearly more than happy to oblige us fans! As you may have noticed already, the Switch lacks a fair amount of twin-stick shooters, so this game should make you happy. But let’s dive into the depths of it to see what the future has in store for you if you buy this game! 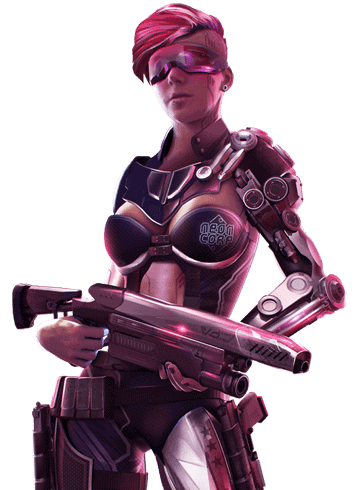 So the features of this game, they are many.

And what would a futuristic review be without a heart-stopping trailer to really get you stoked?

Neon Chrome’s audio is pretty much a cluster if you have a lot of stuff going on on screen. There could be explosions as you’re shooting at bad guys and the very same enemies could be shooting back at you. And all of this audio is hard to differentiate if you’re playing docked with no headphones. It comes across more of just a mush of stuff. Now, I realize that that’s what would happen in the real world, but I feel like all of the audio was the same volume. So the explosion should definitely be louder than the bullets or any other sounds in the level for that matter. They could’ve totally have added a dynamic audio system that makes the explosions louder or quieter depending on close you actually are to the explosion. If I listen to it through my surround sound while my Switch is in docked mode, it’s the same thing, but at least the locations of the sounds come through and add some sense of dimension.

The soundtrack, on the other hand, is absolutely a fun and interesting take on what futuristic music would sound like. Without you listening to it, you already know it’s techno, but they play with the different elements of techno a lot. And it also feels like there is more than one type of techno genre in this game. We get what we deserve in the music department and there is plenty of it. My assumption is that the musician involved in the project new that the game is technically infinite and tried to craft a lot of different soundscapes to set a mood. They also sound on repeat and don’t feel repetitive or overplayed as you’re in the moment gunning people down. 7/10 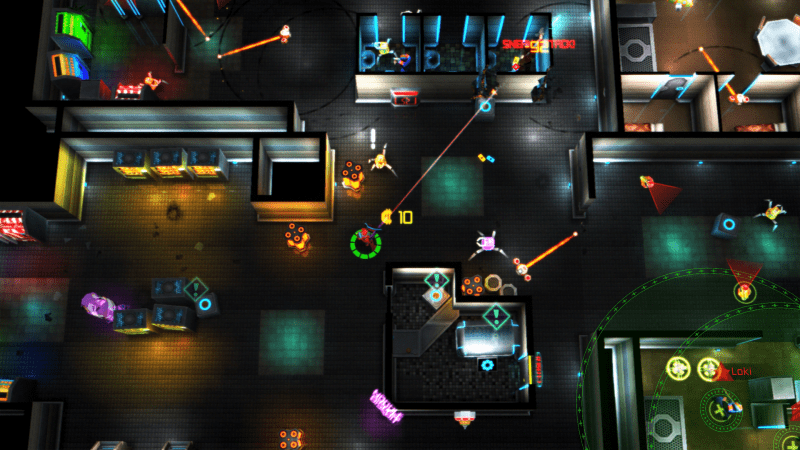 Neon Chrome’s visuals are superbly fun. There are so many neons and blinking and explosions that there is always something happening on the screen. My personal favorite is how the drone type turret robot things had different colors and if they were all coming at you they once they all looked so adorable. That was of course until I died, but I enjoyed death by cute. You can see by looking at any of the screenshots in this review that there is always a lot going on though. It’s hard to get mad at the developers for overcrowding a level by over designing it because each level is randomly generated. However, it is still off-putting to have so much stuff around you at all times and on Switch screen, it’s almost more difficult to discern what is what. But if you’re playing in docked mode, that is where the treat is. I would say that overall I love the cartoonish look of things and how much detail exists. Hell, if there is floor tile in a level, light reflects off of it accurately. It’s definitely impressive in terms of the hardware and how much they have on any given screen at once. 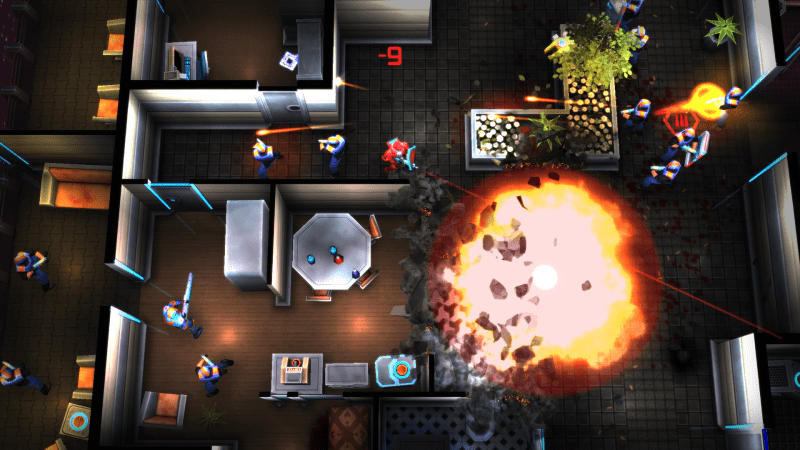 Neon Chrome’s gameplay is definitely something to be desired to me. We have on the one hand that 10Tons LTD. makes powerfully fun twin-stick shooter-esque games. But then, on the other hand, you have this scenario with the Switch where you can take it with you on the go. This may very be the first game that I’ve truly suggested that you play exclusively on the TV in docked mode. I know that some of you have a Switch primarily for its portable qualities, and if that is the case, I would really tread lightly here. And it’s only mainly because of the fact that its gameplay suffers more from being sized down quite a lot making even the most blinky powerup hard to see and thus causing you to die sooner.

But does that mean that this game is bad? No, not by any means. If you’re a person that doesn’t mind playing in docked mode or are more home often and prefer playing in docked mode, this game has a lot to offer. As I said, you have the twin-stick aspect to it, so if you’re a pro at those, you’ll most likely thrive in this game. You have your average elements from those types of games such as various types and strengths of enemies, loads of varied power-ups, as well as a special secondary power. There are definitely some cool aspects involved such as upon dying you can choose a different loadout and give the game another try.  Additionally, when you die you have to pay to respawn as it were, or it costs you at least when you die. I couldn’t really figure out what they were charging me for. Also, I never found out what happens if you have no money and you die. This is primarily due to the fact that the game dishes out money left and right.

The main takeaway here is that it is a fun game, it does wear on you after a bit though if you hate dying a lot in games. I would definitely give it a try if you have an extra $14.00 lying around but again, only if you’re okay with playing it in docked mode. 6/10 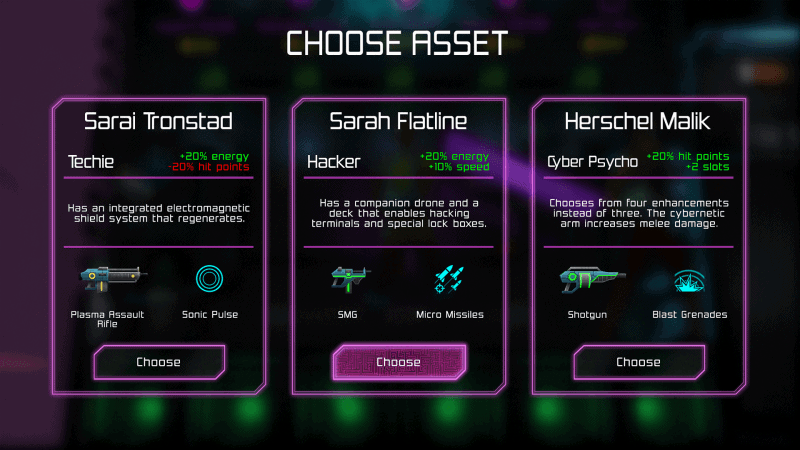 Neon Chrome’s replay-ability is technically there, but I don’t know if I would ever hear of a person saying that they wanted to keep playing after they beat it. It just doesn’t feel like a game someone would keep going back to after they’ve beaten it once and gotten their money’s worth. When I say the replay-ability is technically there, I simply mean that the levels are procedurally generated so they can be different every time. On top of that, you could beat it once through on your own and then maybe go back into the game once more in co-op mode with a friend. I didn’t get to test that section of the game as I had nobody to test it with. My guess is that the difficulty would increase as well to make up for the fact that there are 2 players. I would also assume that that would be something even harder to do without the Switch being docked. 7/10 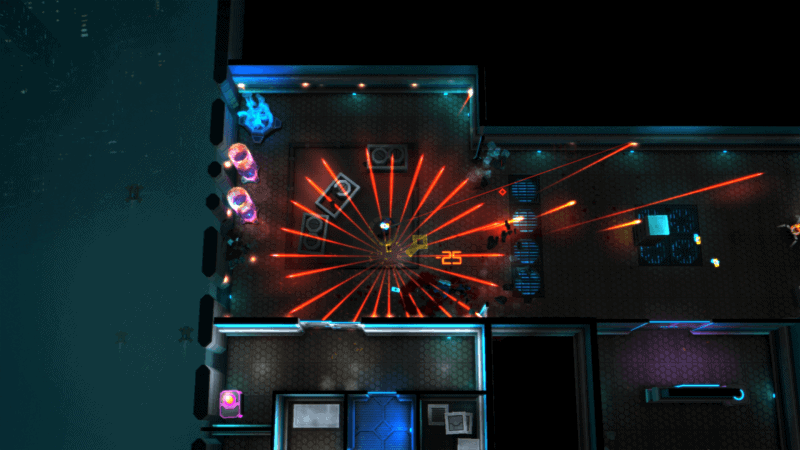 If you’re wanting Neon Chrome for the Switch, you can find the game by clicking here.