Today’s review comes from 10Tons LTD. again and it’s a classic. For their debut on the Nintendo Switch 10 Tons LTD. wanted to do something big so they ported one of their most popular title to the system. That game is Sparkle 2 ($7.99) and as I said before is an ultra popular game on other platforms. So how well does their big debut perform on the Nintendo Switch? Let’s find out. 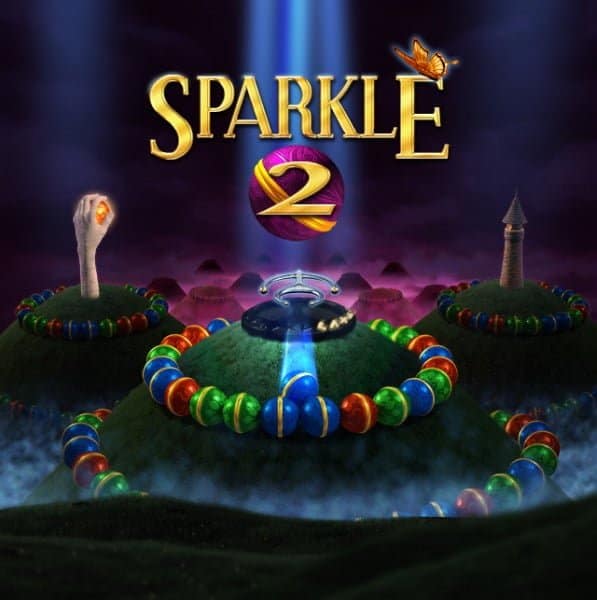 Let’s take a look at the features that this game touts first:

– More than 90 levels throughout the storyline

-More than 200 combinations of 16 different Enchantments

And let’s gaze upon the groovy trailer for it.

I’m not going to dwell on the actual sound effects and soundtrack as they are the same as the ones on the other iterations of this game on other systems. You should already know and love how this game sounds overall as this game and it’s predecessor have fantastic sound effects and wonderful music. What I will focus on in this section is how the audio overall makes the transition to the Switch. We know that when it’s docked that the game is one for one the same as it’s brothers and sisters on other consoles. This means that if you have it on your XBOX One or PS4, you can expect that it will sound just as crisp and gorgeous as it does on those other versions. But let’s face it, you’re probably buying this game or buying this game again for the simple fact that you can take it with you on the go.

So, how does it sound out of the Switch’s speakers? Well the obvious answer is that it will never sound as good as popping in a pair of earbuds or headphones and enjoying it. Especially because there are quite a lot of audio cues for you to catch, especially for power-ups. But if you are all out of headphones or simply are playing with the Switch propped up with a Kickstand, I would say the following about the audio. I would say that unless you have it full blast you won’t catch all of the fun little sound effects and be able to utilize them for their full potential. However, that may not be necessary if you already know what visual cues to catch. In other words, learn how to play the game either docked or with headphones first. After that, you shouldn’t have to rely too heavily on any audio cues as you’ll know what to look for on screen in lieu of the audio.

In terms of the music through the speakers, again, I would recommend headphones. The speakers that Nintendo put in the Switch just aren’t quite there in terms of depth and quality. But the bottom line here is that headphones are not entirely necessary, as the music isn’t required for you to succeed in the gameplay. However, the music is so glamorous that I would really, truly recommend that you definitely listen to it as much as you can. The audio overall just feels so good in this game. 10/10

We already know that they look nicely colored, the shadows are a nice touch, and the balance between the 2D and 3D elements is so nice. However, the visuals will get the same treatment that I gave the audio and soundtrack, which is just talking about how those elements translate onto the Switch. The point that I have to reiterate here from the last section is that when it’s docked, you are getting the same full fledged Sparkle 2 that you get on the other consoles. But we’re not talking about the docked part right now, we’re talking about how it appears when it’s in handheld mode.

The visuals will obviously still look decent no matter the game it seems. We see that in other games that push the boundaries harder than Sparkle 2, like The Legend of Zelda: Breath of the Wild. In this case, we have a game that’s easier on the system and in turn should look good. And it mostly does. It’s moreso like we’re playing it on a Nintendo Wii I would say in terms of looks. Which is not a bad assessment or means anything negative. I loved seeing a title like this on my Switch. It’s just nothing that you’re going to go, “Oh man, that looks so good!” to. It just comes down to the fact that the game is being shown on a 720p display and seems right at home. But I know it looks so much better on a full fledged home HDTV.

So basically, the same as the speaker issue, I would say if anything, Nintendo is more to blame. We just don’t have a high quality screen good enough to show all of the fidelity and nuances that this game has to offer. Does that mean this game looks terrible on the small screen? No, not in the slightest. Do I wish it had an OLED screen that was slightly larger? Yes, because a game like this with loads of colors would just work so much better and there would be more space so that I could concentrate on all of the spheres on the screen at once. Some things I feel like the developer could patch, others are out of their control. 7/10

The gameplay at its core is a frenetic puzzle shooter. You simply get a colored sphere in your cannon and shoot it at a sphere of the same color. And as basic as that sounds, man this game does some things great that others in the genre fail to do. I would say that the fact that you can equip enchantments and have such a variety of power-ups makes this game beat out others like Ballistic and the Zuma franchise. Sparkle 2 has value where it counts. I like the pacing and the choices that I as the player get to make. We have a pause button as well so that definitely helps. For example some puzzle games you cannot stop until the puzzle is over. With this game I was grateful to find that I could just pause and answer a call on my cell phone. Games before this one very much forced us to have to ignore potentially important calls, or hit the home button (causing hiccups in the game at times), or all out just turning off the system. And for a game that is just as on the go as your cell phone itself, that is just an all too useful feature.

But getting back to the gameplay itself, I love the fact that this game has a story line of sorts. I think just dishing out level after level is almost a feeling that grinds on you after a while. Keeping my attention between the levels is important and having me complete an overall objective, such as collecting keys on the story map, is definitely a rewarding feeling and a nice touch. This game’s gameplay just makes me feel like I’m back playing Ballistic on my PS1 and the fact that I can take that feeling with me makes me feel like a kid wherever I go. This game just nails it on the head with gameplay, there’s no lag, there’s no button layout discomfort, there’s nothing but pure unadulterated fun. If you love puzzle games and have never tried a puzzle shooter, I think that this should be your first one. If you’ve never tried puzzle games, same answer, this should be your starting point. It’s the perfect handheld puzzle game and is rightfully challenging, but not Dark Souls challenging. It’s the perfect blend of art and gameplay that I so desperately desire from games nowadays. 10/10

This game is loaded with replay-ability. I mean after you finally make it through all 90 levels of the game, the game has more modes to offer to you; Survival, Challenge, and Cataclysm. Survival alone is what I can only guess is a limitless sphere shooting festival. I say “guess” because I don’t know for certain as I never seemed to reach an end! Challenge is what the name implies, they give you a challenge to complete. And Cataclysm is a crazy intense mode where they introduce several times the spheres and they increase the speeds in which the spheres travel. But yeah, if you somehow manage to beat everything that this game has to offer, you’re still looking down the barrel of Survival. This game has crazy amounts of value for only $7.99. If they would just add a creation mode where someone could create their own paths for the spheres to travel along and share them with all versions of the game, I would say this game would be perfect in terms of replay-ability. 9/10

If you’re wanting Sparkle 2 for the Switch, you can find the game by clicking here.