Our review of Demon’s Crystals for the PS4/XBOX One

My newest review here is Demon’s Crystals.  Now, I played the game and I will talk about it more below, but first, you should read what it’s about and watch the trailer.  Trust me, it’s worth it.

‘BadLand Games and Byte4Games has launched the frenetic shooter Demon’s Crystals on PlayStation 4 and Xbox One as a digital release!  With eight different game modes and addictive co-op action, Demon’s Crystals is sure to please console gamers looking for fast-paced arcade game-play and bright, vibrant visuals.’

‘Demon’s Crystals tells the story of a world once ruled by immensely powerful astral demons known as “Uricans” who became comfortable at the top of the food chain. However, everything changed when three mysterious beings suddenly turned the planet’s peaceful population into destructive minions. It’s now up to you to take control of the remaining Uricans to restore order, save the world and safeguard your place in the sun!

Controlling your Urican is as simple as pointing your character in the right direction – and shooting! New weapons and power-ups are auto-equipped as you find them – and they’ll expire when you run out of time. Be mindful of your surroundings, shoot to kill, and make the most of each equipped weapon and power-up to give the horde some lasting, painful memories.’ 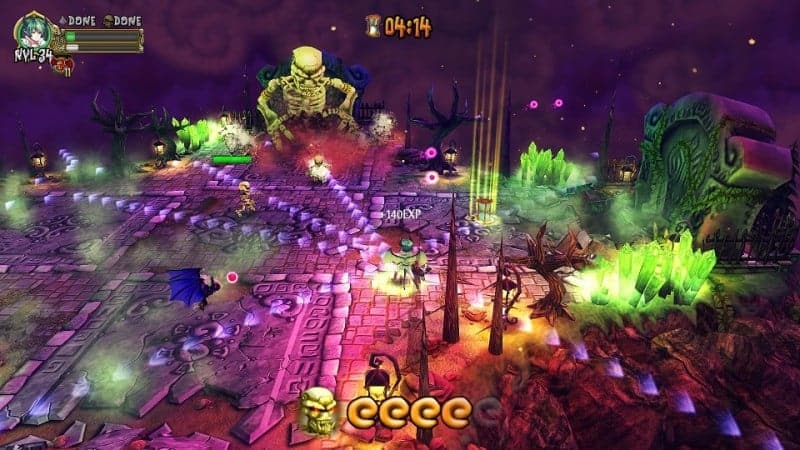 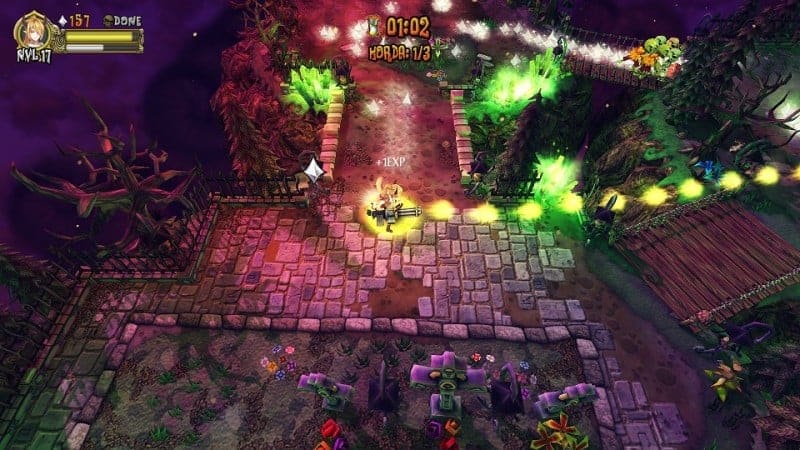 The sound effects in this game, if you watched the trailer can be…frequent.  Often.  A lot.  What you have is a twin stick shooter and with those type of games you have the sound of every bullet whether you have shot it or it is shot at you.  But in this game, since it isn’t a space ship as normal twin stick shooters, but a character, you also have character sounds.  So every time your character get’s damaged there’s a sound. Every enemy spawning makes a sound.  Every enemy dying makes a sound.  Shooting buildings makes sounds.  You get my point.  Nevertheless, BadLand Games and Byte4Games have found a way to make all of the sounds not only unique but almost as if you want to hear them.

When you expect to hear sounds to round out the experience, you never want to turn them down or off, you more so miss them.  I tried turning the sound effects off and it just was a lesser experience overall.  The quality of the sound effects were quite nice too.  For being a non-AAA title from small studios, you can tell that they put a lot of solid work behind it.  The only reason I can’t give it a perfect score is simply because I think I should be able to adjust voices separately from sound effects.  I definitely would have turned up the voice of the character more so when she got hurt I could pay closer attention to that rather than having to keep looking up at the health bar every so often. 9/10 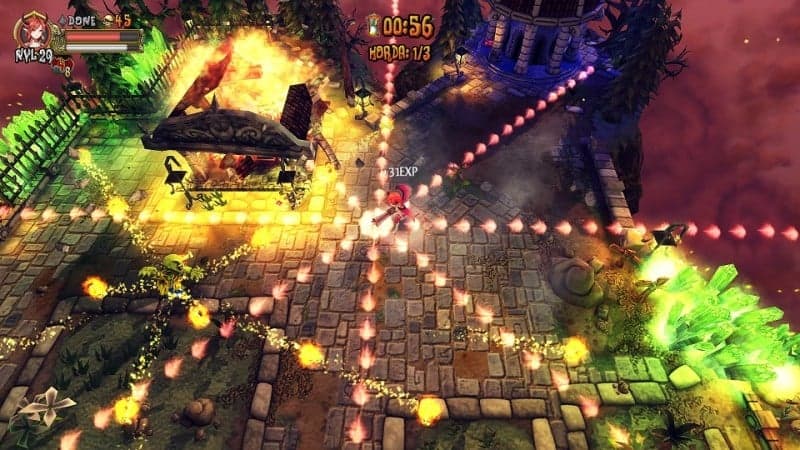 The soundtrack was maybe a more aggressive experience than the sound effects.  I definitely felt as though hearing the same song over and over again per every 8ish levels, got tiring.  At the very least I was glad that the song didn’t start completely over whenever you have to restart the level(s) from scratch because time ran out or you died.  I’m definitely not saying that the music was bad by any means, in fact, again, I was surprised how moody and melodic it all was.  However, I just wish that there had been a greater amount of diversity between each individual stage.  Or maybe, just randomize the handful of tracks that they had more often between individual stages.  Truth be told, I almost used the custom soundtracks from USB (it’s an app from the XBOX One’s App Store) to use some different music. 6/10 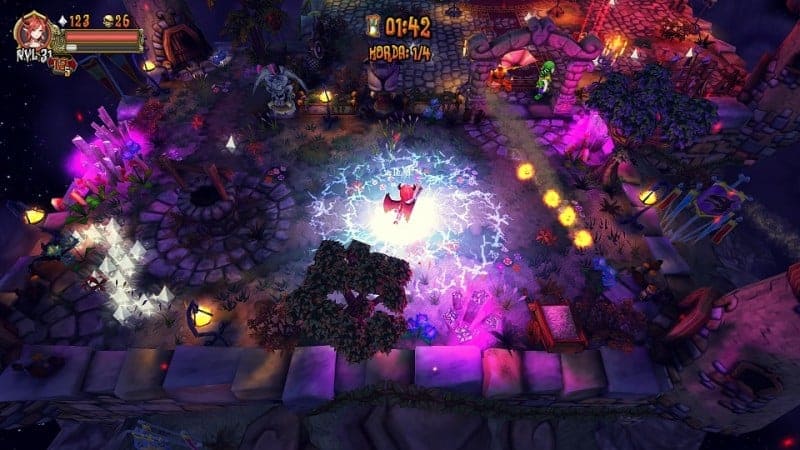 I loved the visuals.  You probably won’t hear any complaints from me here.  I loved the arcade setup where it was just a very well arranged stage.  I also liked the fact that if you died, you have those sweet 9 seconds to make a decision.  Do you jump back into the frenetic madness?  Or do you maybe let it time out and take you back and you try again with a friend or friends.  But I’m getting ahead of myself.  As soon as I loaded up the game for the first time, I immediately was taken back to a place that was more my youth where we had the turn of the consoles from XBOX to XBOX 360.  I’m not saying that the game has bad visuals, I’m saying very much on the contrary.  I think that the game has specific visuals that they are trying to match or harken back to.  I want to say it’s somewhere along the lines visually of World of Warcraft mixed with some elements of Banjo-Kazooie: itNuts and Bolts.  I can’t precisely pinpoint what it is that I loved about it so much, but I am now very much a fan of it. 10/10

So this is the big topic, right?  How is the game-play?  You have a fast paced twin stick shooter that can be played up to 4 people.  Everyone can level up, people can drop in, they can drop out, but the game just keeps going.  Okay, now that that’s out in the open, I just have to say that I have not played a bullet hell game like this before.  What they’ve done to make it fresh and unique is add objectives.  Sometimes, it’s to do the task which is the title of the game, collect a certain amount of crystals.  Other times it’s defeat a certain amount of zombies, witches, clowns, knights.  Sometimes it’s a combination of the two.  But ultimately, since they gave me a purpose for the shooting, I genuinely feel as though I’m not aimlessly shooting at other things on the screen.  The other beautiful aspect about it is that bosses do not occur at the end of every stage, or every 3 stages like similar games.  You have them about every 8 stages and that’s paced out enough to keep cranky gamers like me happy.

The leveling is almost a requirement.  You may find yourself in a stage that you just cannot complete.  You may play it 4, 5, 9 times.  But the good thing about that is that at some point you will have leveled to the point of matching and surpassing the baddies in the level.  But boy, will it challenge you.  I left it on Normal mode and played it and wanted to yell sometimes.  But at the end of the day, I do believe that is the point.  I think they found a good balance.  They didn’t make it too easy and boring, but on the other hand, the challenge is just enough for you to say ‘You know what?  Lemme try that again, I can do this’.  And that is absolutely where the fun is.  The baddies get harder, but you get stronger, you gain new weapons, shields, runes and such then kickass! 9/10 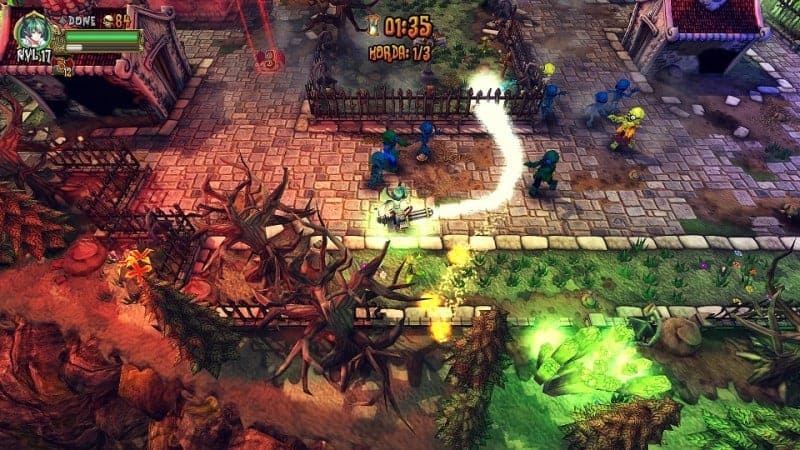 The last section of the game play section kind of alluded to what I’m going to talk about in this section. Replay-ability is strong with this one.  You can level up any one of the 4 characters.  So you could technically beat the game individually with each character.  Or, you can play it once through all on your own and then once with your friends.  Or you can work on beating out your friends on the Survival Leader-boards.  I think this game oozes replay-ability, but in terms of story and unlocking extra endings or anything hidden like side quests, this ain’t one of those games.  It’s arcade.  It’s frenetic.  You could get tired of it I suppose, but I’ve noticed that when I’m not playing it, I’m so very much drawn back to it.  It is a finite amount of content with the exception of that Survival mode, so keep that in mind if you think that there’s oodles of content.  I can’t stress that enough.  It’s random, and that’s cool!  8/10 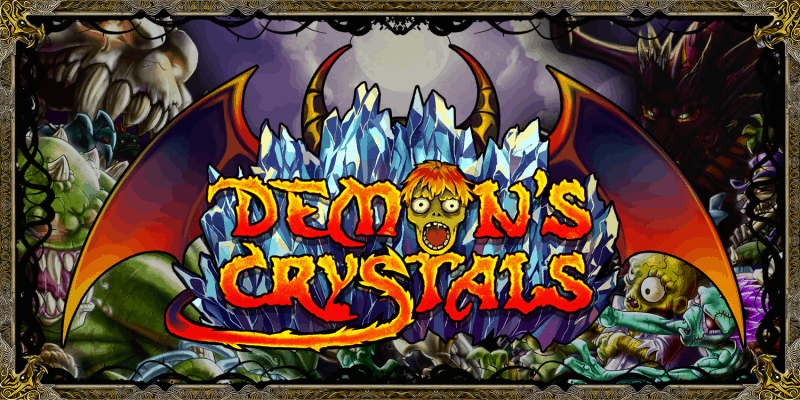