So, what is the N2 Elite?  Besides having a sexy and intriguing name, the N2 Elite is the next evolution of the Amiiqo that was first released a few years back.  For those who are even new to the name Amiiqo, I’ll go into further detail.  These products are NFC technology that let you back up your Amiibo onto the one device.  The newest of these, the N2 Elite, boasts 200 slots for backing up your Amiibo onto.  I’ll let their website features (under the picture below) tell you a little bit more. 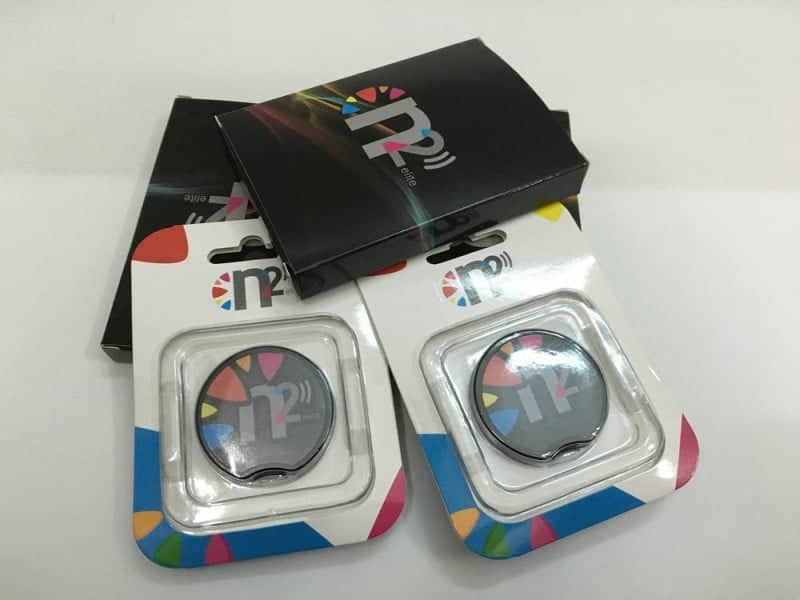 So I thought that the easiest way to review the N2 would just be to go through the list of the features that the website boasts and talk about them in slightly more detail so that it helps you, the consumer.  After that, I’ll have a quick paragraph about my overall thoughts on it.  I’ve sprinkled some screenshots of my endeavor throughout as well. 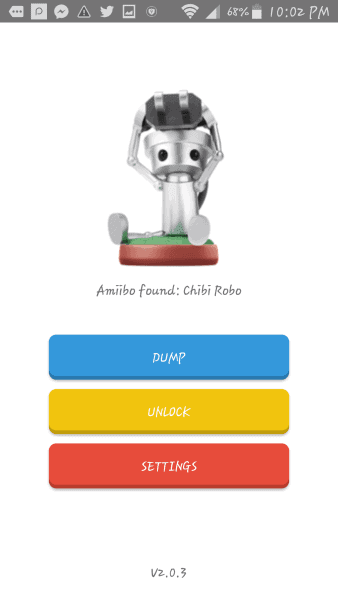 First feature ‘Stores up to 200 characters’ is not technically a falsification.  And there are pros and cons to the statement.  The pro being that yes, the N2 has 200 NFC slots that are blank and ready for assignment within the N2, fantastic.  The con is that you have a few options on how you would like to access them and neither of which are entirely ideal.  The first being that if you want to use Luigi and he is in slot 148, guess what, there’s no way around it, you’re pushing that button on the N2 Elite 148 times.  Now, if you did all of your hard work for the N2 on an Android device and not a computer, then you can always just specifically pull out your phone, load the app, tap on Luigi and assign him right then and there and that would be easier, but that makes your phone more of the product needed and not necessarily the N2 needing 200 slots.

The designed feature is to have the N2 getting all of the save data from the game too, versus just being a blank amiibo, and that’s fine, it can do it, but if you don’t want to find yourself pressing the button 100+ times every time you want to get to Luigi, it makes more sense just to do the Android option, then use the N2 on the Switch, 3DS, or Wii U and when you’re done with it, back it back up to your Android.  I personally do not mind pressing a button repeatedly, but a child with a short attention span, or one that loves Amiibos but can’t count to 148 yet, may definitely have a hard time.  So I’d say it’s for users 10+ or adults have to help the kids.

Second feature ‘Easy push button to effortlessly change characters’ is indeed easy.  The button itself has a nice tactile click and it is even curved for your finger so it’s easy to find if you’re playing your Switch, 3DS, or Wii U in the dark.  It really does the swap right through characters with each button press, this is unlike how easy it is to swap through games on the Sky3DS or the Sky3DS+ (just an example for those of you who have owned a Sky3DS).

The third feature ‘Save your collector’s items in mint condition, for ever !’ is kind of a marketing ploy.  But I don’t want to use that term because it has so much negative connotation and what I mean is barely negative at all.  All that I’m alluding to is that if you want to scan your Amiibo specifically, then no, you cannot leave it in the box (except Shovel Knight) because of the way Nintendo design the boxes.  Now that’s not to say that you cannot buy every Amiibo imaginable and leave them in the box and have a fully functioning N2 Elite.  The N2/Amiiqo community is quite large and you can absolutely find blank files for every character that exists.  It’s heavily noted in those forums that, just like video games, you should dump your own and in the same vein as video games, only have a backup of what you have legally purchased. 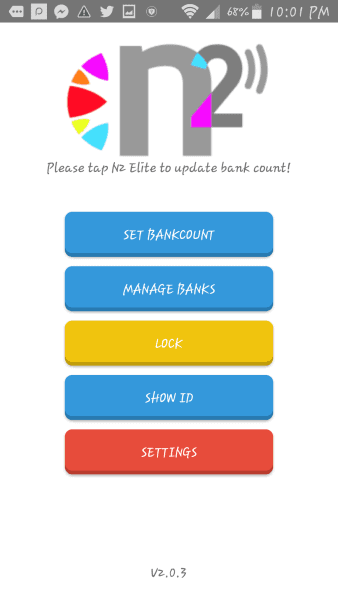 The fourth feature on the list ‘Family sharing of characters !’ is sort of a vague statement, but boy does that exclamation point help.  So let me take a crack at what they’re saying here.  I think that they are getting at the fact that the N2 is versatile and portable and that if Mom has 5 Amiibo and Dad has 18 Amiibo and little Billy has 63 Amiibo, that the whole family could back up the Amiibo.  And that if they were to all go on a trip with their Switch or 3DS’s, they could simply carry just the one N2 device and just share it.  This would reduce the need to carry 86 Amiibo, and would just be the N2 which is the size of a Chips Ahoy! cookie.  Do I agree with the statement after testing the N2?  Absolutely.  I had a mess of Amiibo on the floor and it condensed everything down to the convenient N2, so handy for gamers on the go or gamers who don’t want to mess up their Amiibo display. 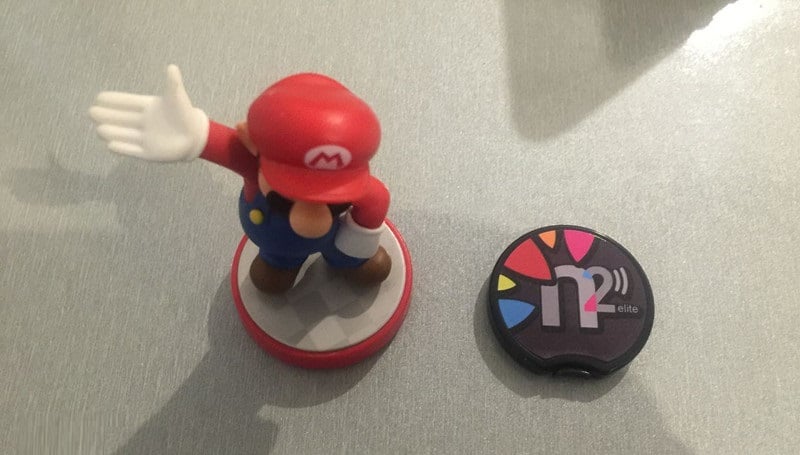 Next feature ‘Backup multiple save states of your favorite character !’ is true.  The best example for this would be to first explain how Amiibo work in Super Smash Bros. Wii U/3DS.  In Smash Bros. the Amiibo is essentially a ghost fighter.  You beef up your Mario in a game for instance, and then when he is where you would like him to be in terms of accurately executing his fireball move, then you can save him to the Mario Amiibo and take him to a friend’s Wii U or 3DS and see how he fares against their ghost.  Now, this is where the N2 could come in.  Let’s say instead of having the Mario Amiibo to save the ghost fighter too, you use the blank Mario Amiibo that is saved on slot 1 of the N2.  But now let’s say that you want to now work on Mario’s close range fighting and you get him finally to that point.  Now you can simply have another blank Mario onto slot 2 of the N2, now you have 2 separate fighting Mario’s on one device.  This is super helpful in general but cool within Smash Bros. definitely if that is your scene.

Second to last feature ‘Play multiple games with one character! (just back it up into 2 amiiqo slots !!! )’  it’s a long one, but oh so true.  Similar to the previous feature, you can use the same Amiibo across several games.  Do you love the first party Nintendo games?  Of course, you do.  So in the scenario that every single one of the first party Nintendo games crams Amiibo functionality in it (because they do) you can do the following.  Let’s say you own 5 separate Nintendo games on your Wii U that all use Mario, but he has save file data, in other words, it’s not just Amiibos unlocking something, but rather, is a character with save data.  You can have the same blank Mario file across 5 slots on your N2 Elite.  Just remember the slot number that you used for each game.  Or just play the games one at a time until completion, moving onto the next slot on the N2 for each game.  Easy as pie. 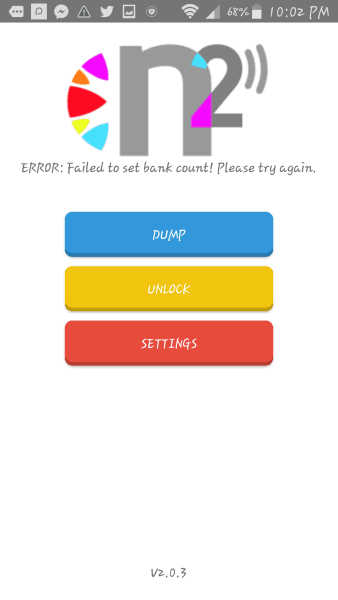 The last feature on the list ‘Android compatible’ is not so much a feature as it is a statement.  In fact, I would say, that as of the time of writing this, Android is simply a requirement.  Yes, they are releasing a read/write USB device for the N2 Elite on PC/Mac soon.  But I did not get to test that.  The Android part was difficult, I will not be too shy to say it.  The app itself was not in the Android Play Store, despite there being no real regulations on apps on their store.  It may just be that it simply gets updated so often with new fixes and features that it may be too much work to continually keep pushing it to the Android Play Store.  Nevertheless, you can find it on their website on the downloads page.  This is where I got slightly frustrated.

You can see three mirrors for the link to the .apk file.  They all say that you can download it and see the manual.  Yes, it takes you to the download on all three of those mirrors, but not the manual.  On any of them.  In fact, finding a manual seemed to be pretty much impossible.  In. Fact. Even watching tutorials never quite yielded an answer on how to operate the app.  And the app is simple, simple to a fault.  No explanation is there in any capacity.  So you can start poking and prodding your phone with the N2, but do you press the button?  Do you hold the button? Do you not touch the button at all?  Eventually, you figure it out simply by trial and error, but that is such a sorry system.  But yes, after you figure it out, and memorize what you need to do, it’s not near as difficult as figuring it out.  Furthermore, if you pay attention, they say phrases like “Touch the Tag” or “Touch the Amiibo” and to my dismay, they seem to use them interchangeably.  So my advice would be to pay attention.  If you already touched an Amiibo, it means that it wants you to now touch the N2.  Or vise versa.

So, my overall thoughts?  It’s a goshdarn good device.  I know that you just read me talking about how frustrated I got with the app.  Just go into it knowing that it will take some guess work, but all good things take time.  Or you could simply wait until the beginning of June and get the PC program, the drivers, and the USB read/write device because it looks exceptionally well thought out in that regard.   My in terms of the actual N2 Elite itself, it does exactly what is promises to do, hands down.  It can technically fit every Amiibo in existence right now on it.  And for those wondering, yes you can back up the Animal Crossing NFC Amiibo cards, and yes, the Donkey Kong and Bowser Skylander/Amiibos work as well. 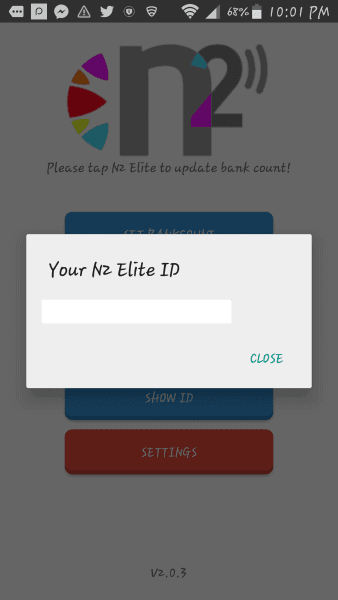 The N2 Elite on its own is between $45-$50 (prices could go higher or lower with time).  Click here if you’re interested in one!