Review – I am Setsuna

One of the throwback to classic JRPG titles released last year. I admit I bought it, but it went overlooked in that sea of games from 2016. The title is I am Setsuna. I overlooked it wishing for a Vita port in the United States (despite buying it for the PS4). I am Setsuna arrives as one of the launch titles for the Nintendo Switch and I am giving it a go. Is it truly a throwback to past JRPGs, while standing on its own or does it not live up to that? Let’s find out with my review of I am Setsuna. 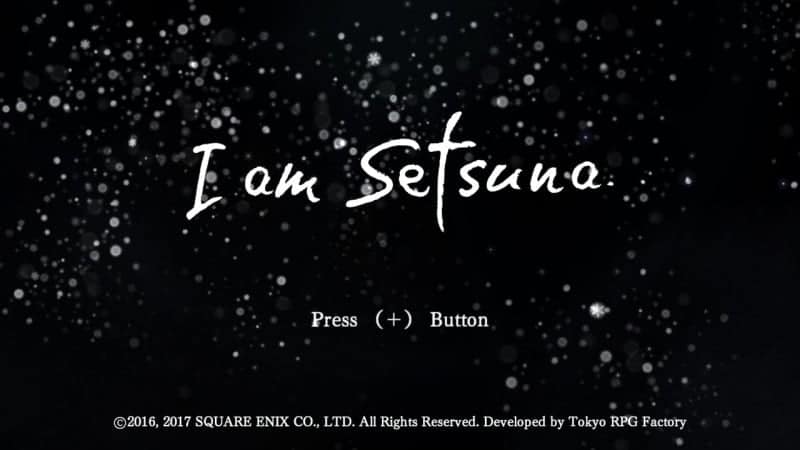 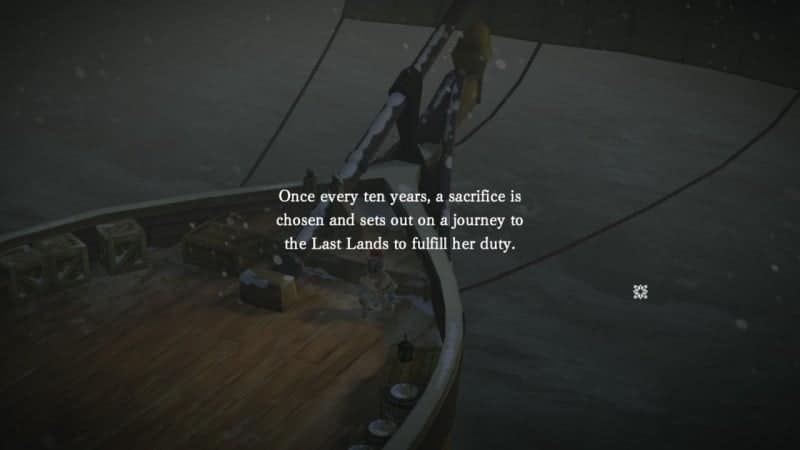 The island had a custom
To maintain peace, once a decade, a sacrifice was offered to a fiend on the island. However, one year, the fiend grew violent before the next sacrifice was due. Those living on the island were afraid and tried to calm the fiend by offering a sacrifice; Setsuna, chosen because of her powers of enchantment. Setsuna must leave with her safeguards for the farthest land, where the ceremony of sacrifice will be held.

Throughout Setsuna’s adventure, she will have her own beliefs challenged and must overcome obstacles to achieve her ultimate goal of being the sacrifice. Will she overcome those obstacles with her safeguards or will other factors deter her from that goal? 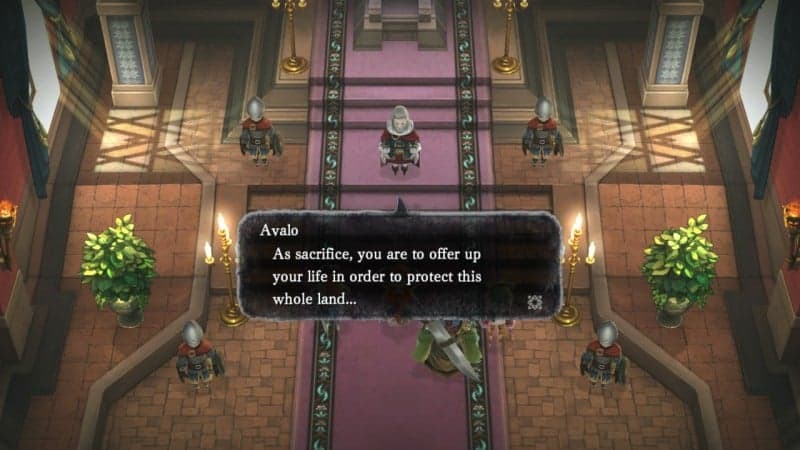 The story itself in I am Setsuna is that similar to Final Fantasy X, if the player has experienced that game before. You must journey to Lost Lands to fulfill that purpose. The delivery of the story is there, in addition there. However, at times the story tends to lose some pacing as some elements just come out of nowhere with little explanation of it. It is a unique story nonetheless, however it also has similar elements that fall into the JRPG tropes of story. It blends somewhat well at times, other times it just falls apart. In the end, it ultimately delivers the story it set out to do.

My overall experience with the story is an enjoyable one. I kept getting Final Fantasy X vibes while I was playing. However, there were some differences in the story which made it stand on its own. It did have that old school feel in terms of story.

Intro/Store score: 3/5 – Pacing in story delivering is a mess at times and falls into classic JRPG tropes. However, it delivers on what it set out to do and does achieve that goal at the end. 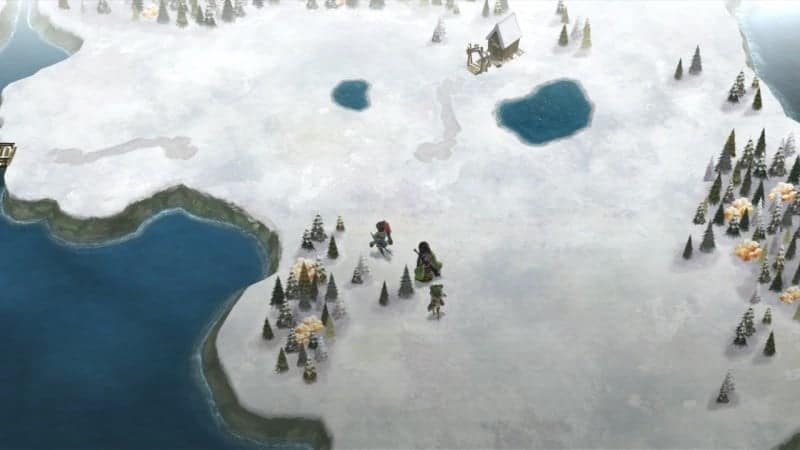 In terms of gameplay, I am Setsuna truly does feel like a classic JRPG. Tokyo RPG Factory is an external factory created by Square-Enix in charge of developing RPG games. Some of the development team is former developers of classic Square games. Knowing this, you feel the classic vibes playing the game. It feels mainly like Xenogears and Chrono Trigger.

You are dropped into the overworld map to travel from one location to another. When you enter a town, you are free to talk to any NPC, shop from the citizens, find random items laying on the ground, and progress the story in each town. This is basic the formula in each town. It hardly varies from what I experienced, however, I find it okay as being a throwback to classic RPGs, it seriously delivers as one. That fits perfectly in this game. However, players who try to compare it to a new generation of RPGs will find it lacking in several aspects. 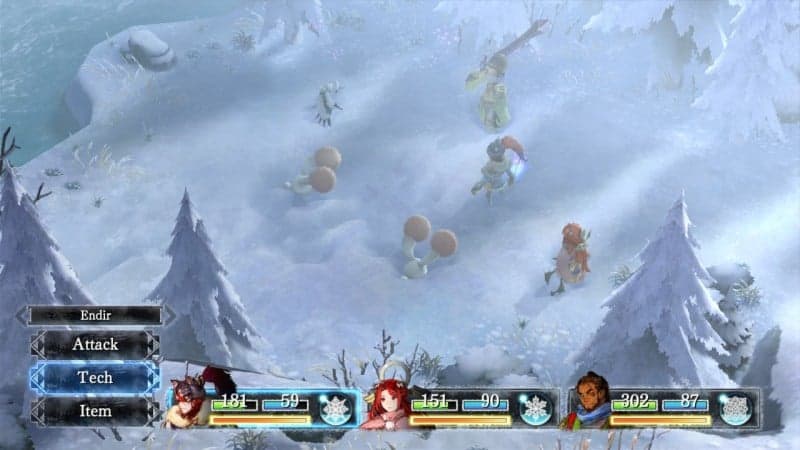 The battle formula is very similar to Chrono Trigger. You have an Active Time Battle meter which tells the player when to carry out their action. The enemies have their own ATB, but it is not on displayed on the screen. Depending on which battle ATB setting you have (wait or active) you are even given a bit of time to strategize on each action or have to do all the actions on the fly. This was classic to the majority of JRPGs in the past and does provide a sense of urgency. You have to figure out what is the best move or suffer the fate of being overwhelmed in battle. Sometimes being over leveled does not help in that aspect if the player is not ready to respond accordingly in their battle. 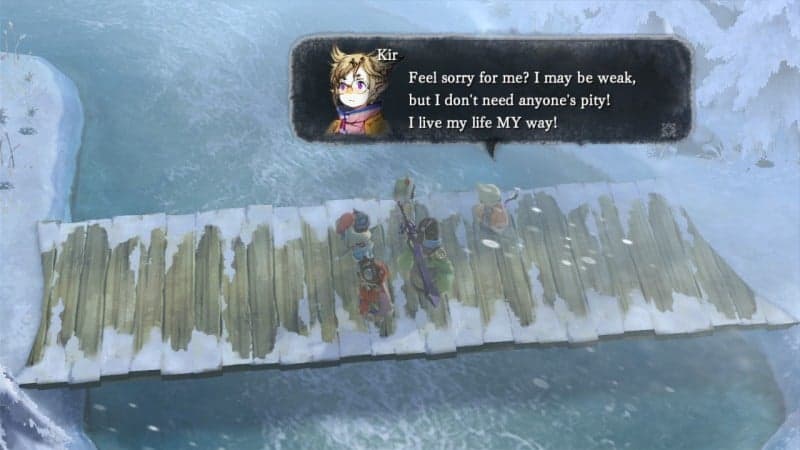 A new gameplay element for I am Setsuna exclusive to the Switch is the portable mode. I wanted this so bad for the Playstation Vita when it first released last year in the United States. I wanted to play this game on the go. However, the game never came to the United States for the Vita, and the only possible way to do it now is using a modded vita and a translation patch. Regardless of that issue, the portable mode of the Switch is fantastic. It is a game that runs better in portable mode and has all the same functions of the game. It is a perfect game on the go. I recently utilized it and loved it.

Another exclusive mode for the Nintendo Switch is the exclusive upcoming DLC for April 2017. It is known as the “Temporal Battle Arena.” This arena pits you against other NPCs, your friends via Friend Codes, and online battle. As of this time, I was not able to try this, but I am intrigued to see how it plays when it comes out.

With all of the classic JRPG elements, there are also some factors that carry over. It comes with the difficulty curve, exploration, and backtracking at times. It works but also plays into the negative of the games. Still, the classic feel, but also has the classic problems.

Gameplay Score: 4/5 – Nice addition utilizing the Switch’s portability mode. A classic JRPG gameplay and feel for I am Setsuna. However, it brings the classic JRPG issues along for the ride. 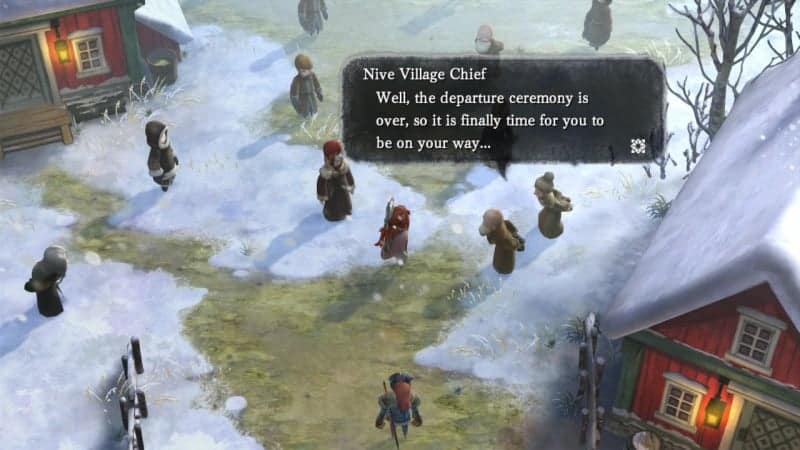 Visually, I am Setsuna is very good looking. It is truly a throwback to classic games, naming Chrono Trigger in this area. However, the visuals are updated as if a classic JRPG is revitalized to the current standards. I really see no issues here as it fits the theme of the game.

Visual score: 5/5 – A classic look updated to fit the current generation. It works given the throwback theme of the game.

Audio wise, there is much to be desired. Even in classic JRPG games had multiple music tracks in the game. This game seems to have a handful of music tracks. You have the Overworld song, the town theme (same for every town), the dungeon theme (same for every dungeon), the urgency theme (once again same), and boss themes (with exception towards late game, this is the same). There is no variety in it. Sound and voiceover work is wonderful, but the problem itself lies within the music, which rarely exists in any variety. The music for the availble tracks are fantastic. I just wish there was more and more variety to it. A suggestion is if another game is done in this style, hopefully, there will be a larger budget and some dedicated to music choices.

March of the brave

Audio Score: 2/5 – Little to no variety in music tracks. You will become bored of the music in no time. Hopefully, if another game happens in this fashion, much more variety will come. 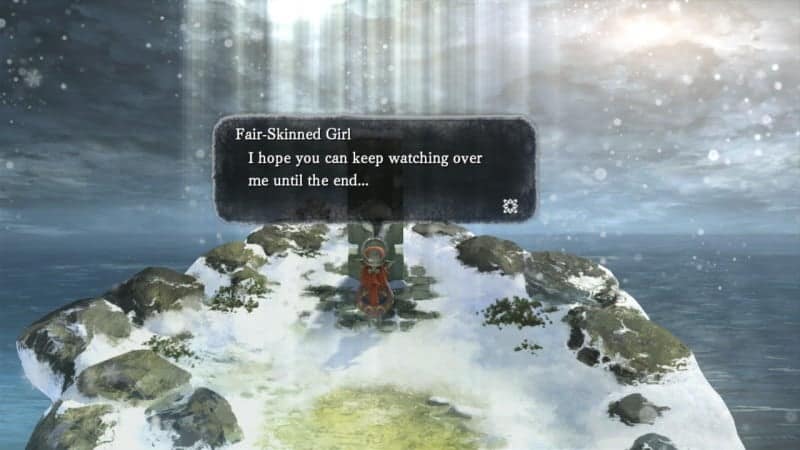 This is a one and done type game. No other replayability there. There are 7 side quests that unlock an optional area and optional boss. However, in terms of the game, no new game plus, no multiple endings, or anything of the sword. It is literally a beat once type game. Once it is done, it is done. It does serve a purpose to fit the narrative, but beyond that, there is nothing extra. This is the same with classic JRPGs. Once they are done, they are done. I can respect that since this is a throwback to those type games.

Replay Value: 3/5 – Nothing extra to be had, limited side quests, one and done type game. It has the classic JRPG feel, but it would be nice to have a bit more variety options in terms of quests or an extra feature. 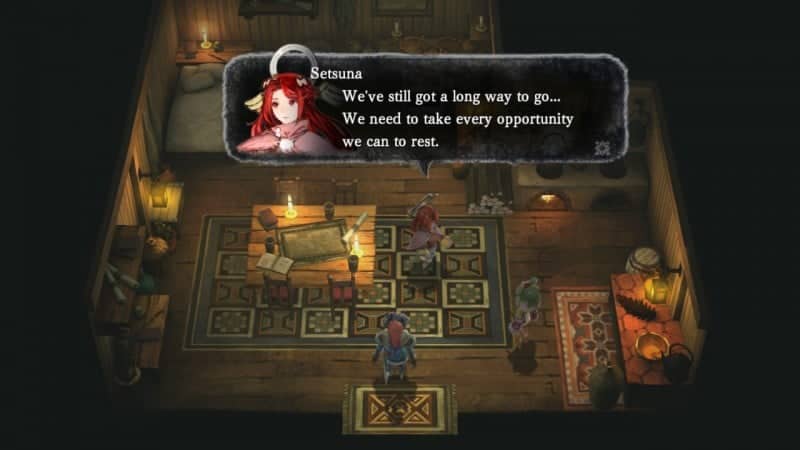 Is this game fun? I would have to say this is quite subjective. For me, once the game dug its claws into me, it had me hooked. It is very classic JRPG, plus the story is incredible despite having its issues. I wanted to see the journey until the end and was emotionally invested as I played. I can see some players skipping the game for not finding it fun or “feeling too classic”, but to me, this is a great throwback through and through.

Fun Factor score: 4/5 – Fun game, invested story. It could get boring for people not familiar with the classic JRPG feel, or feel “too classic” but pushing through will resolve that. 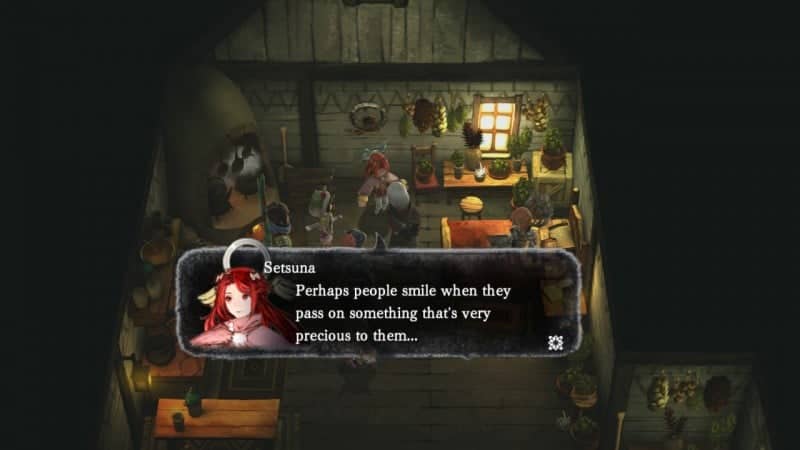 I am Setsuna is a very classic JRPG in a new JRPG world. The classic visuals, classic story and classic battle system are all here. However, with being a throwback to classic games, it brings along the classic issues. If the player pushes through, it is a classic game for the books. It tells a narrative that is rarely brought up in current JRPG games, and it works for this narrative. If players are hesitant on this game, do a bit of research and youtube some videos on it. This will be a good game to play in my opinion. Just go in not trying to compare this to a new age JRPG. It is a throwback to the games that laid the foundations to what is to be today. I respect that and love it very much.

Intro/Store score: 3/5 – Pacing in story delivering is a mess at times and falls into classic JRPG tropes. However, it delivers on what it set out to do and does achieve that goal at the end.
Gameplay Score: 4/5 – Nice addition utilizing the Switch’s portability mode. A classic JRPG gameplay and feel for I am Setsuna. However, it brings the classic JRPG issues along for the ride.
Visual score: 5/5 – A classic look updated to fit the current generation. It works given the throwback theme of the game.
Audio Score: 2/5 – Little to no variety in music tracks. You will become bored of the music in no time. Hopefully, if another game happens in this fashion, much more variety will come.
Replay Value: 3/5 – Nothing extra to be had, limited side quests, one and done type game. It has the classic JRPG feel, but it would be nice to have a bit more variety options in terms of quests or an extra feature.
Fun Factor score: 4/5 – Fun game, invested story. It could get boring for people not familiar with the classic JRPG feel, or feel “too classic” but pushing through will resolve that.

Final score: 21/30 – I am Setsuna is one for the books. It is a classic game in a new feature. It aims to recapture that classic feel that laid the foundation for what JRPGs are these days. It is very commendable and respectful as to what it sets out to do. I am Setsuna has its bumps in the journey, but overall it sets out what to do. This should be played to not compare to a current JRPG. It is a classic throwback through and through. Treat it as such and it will be a good time.