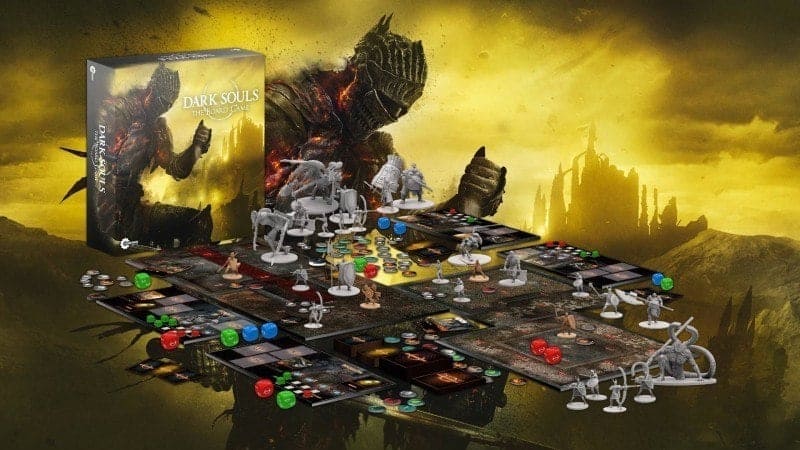 Dark Souls: The Board Game by Steamforged Games’ when it was first announced was launched as a Kickstarter campaign. In the first three minutes, the board game raised it’s original goal of $72,000. Yesterday as the campaign saw its conclusion, the total amount of $5,454,494 (£3,771,474) in pledges from approximately 31,179 backers had been reached.

Dark Souls: The Board Game with $5.4M in funding is the 12th most funded campaign on Kickstarter ever, behind the campaign for Bloodstained: Ritual of the Night the Castlevania successor from the series designer and producer Koji Igarash, which raised $5.5 back in 2015.

The official description of the Dark Souls board game can be seen below:
“Players choose from a number of core character classes and explore dangerous locations full of monsters, treasures, and deadly boss fights.

Designed specifically for the Dark Souls universe and introducing a number of innovative gameplay mechanics, with world-class miniatures faithful to the rich universe,  this game delivers an experience that captures the very essence of the original video games.”
All backers of the campaign will receive the full set which includes Player Characters, the Core Game set, the Iron Keep Armour set, Invaders and almost all the Summoned expansion.

Intricately crafted models from enemy to player characters are also found with bosses such as Dragon Slayer Ornstein, Dancer of the Boreal Valley and Executioner Smough. Considering how taxing the Dark Souls games are, the board game will most likely be just as difficult.

The following items have been added to the core Kickstarter pledges:

Bloodborne was actually another FromSoftware title which is being graced with a tabletop adaptation from the creator of the XCOM board game and A Game of Thrones: The Card Game.

Steamforged Games in light of their Kickstarter success sent out a message to the backers:

“A heartfelt thank you from everybody at Steamforged Games Ltd. We’ve thoroughly enjoyed this campaign and look forward to keeping you all in the loop as the game progresses. We are honoured to have your support and to have spoken with you all in the comments and via the inbox.”

At this point in time the release date has been set for April 2017 and is currently in development.

Steamforged Games have offered an in-depth video which explains how it all works as seen below.

So what do you guys think about this Dark Souls board game – is it something you have been waiting for?

I like to get everyone the right info and I like to help others get the most from there electronic devices. I enjoy playful cleverness and the exploration of technology. My Motto: You own it, you can do whatever you want with it.
@HackInformer
Previous The Angry Birds Movie hits cinemas & breaks records
Next Dragonball Xenoverse 2 is coming this year!