iPhone: Security App to detect Jailbreak made it to the AppStore

If you haven’t noticed or heard about it yet (because Android rules and Apple is Apple), a new app called: System and Security Info made it to Apple’s AppStore and is drawing a lot of attention lately.

The app was developed by SektionEins, a german software company specialized on security. For some of you Jailbreakers out there this might ring a bell as the main head behind that company is no one else than famous hacker Steffan Esser aka @i0n1c! Within 2 days the app made it to the Top Paid iPhone Apps in nearly all store regions!

Unbelievable! We crushed Minecraft in the USA store… Thank you all for your support. pic.twitter.com/Th2YSJolk9

Why would I need to check if my personal iPhone is Jailbroken? Well, there are plenty of reasons! There’s always the possibility that the previous device-owner messed something up or your girlfriend doesn’t trust you and installed some spying software like those from HackingTeam or FinFisher.. Not to mention the big brother watching! Of course, this might sound highly unlikely but better safe than sorry, right?!

“The anomaly detection in this app tries to verify that certain security assumptions are still valid. This includes that code signing flags of running processes have not been tampered with, the app is still encrypted and not running in a debugger and that code signing still detects malicious apps and that no unsigned binaries are running. Furthermore, it is validated that no unexpected libraries are injected into the process because this is usually used to tweak runtime functionality. Because the accessibility features of iOS will inject unexpected libraries into our process the app will mention this as a detected anomaly.”

Aside from Jailbreak-detection the App has a lot more cool features and is even capable of reporting about all running processes for example! 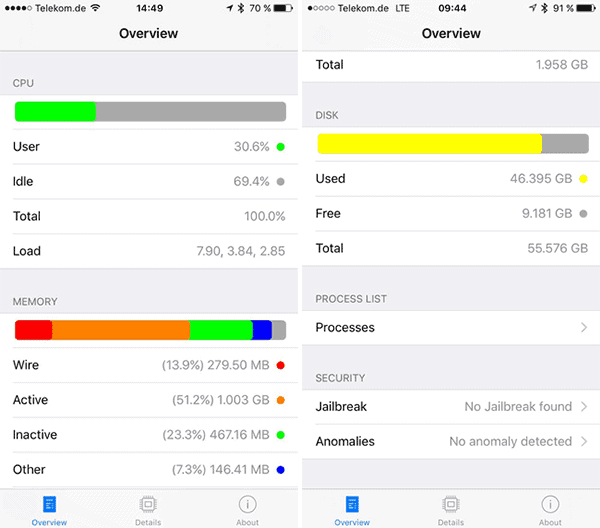 And if all this wouldn’t be interesting enough already the actual reason why the app made this much waves is even funnier! The application itself broke out of Apple’s app-sandbox to obtain all these information! And while thats of course not intended to happen, Apple most probably will remove the App again soon-ish.

The bug fix is now for about 24h in Apple review. Before app got media attention review took 3h-6h. Go figure what happens next ?

The app “System and Security Info” works for iOS 8.1 and up and currently is 50% OFF for a limited time! So go grab it while you can!

More information can be found at: https://www.sektioneins.de

Moin! Occasional programmer, number 2 here at hackinformer.com & creator of the PlayStationGuide. I mainly talk about console-hacking related stuff..
@freakler94
Previous Phoenix Wright: Ace Attorney 6 Spirit of Justice September Release Date For The West
Next Cobra Black Fin for the PSVita pops up on a different Modchip site for sale