Our Review of Star Fox Zero

Hello, everyone Mgs2master2 here! I am here to tell you about Star Fox Zero. Star Fox has always been one of the mascots/well-known Nintendo characters. From the SNES days to the 3DS, Fox and company have always graced us with a faithful jet rail-shooter space adventure. These games, as a whole, have always been fantastic to some degree. Finally, Star Fox flies to next gen with Star Fox Zero for the WiiU! Will it continue the trend of fun and awesome shooting, or has Fox been shot down? Let’s take a look. 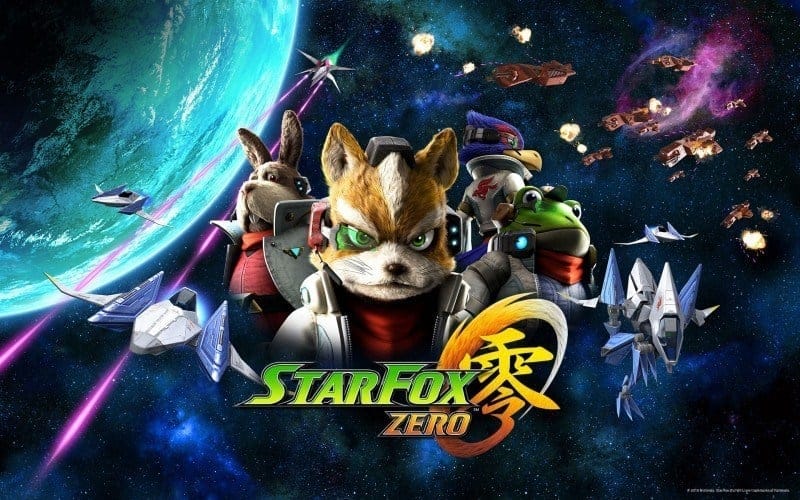 The first thing you would notice is that this all feels and looks familiar. After having this sense of Deja Vu, you will realize that this is very familiar. Star Fox Zero, in a way, is a re-imagining of the beloved Star Fox 64. You get the same levels, same characters, and nearly all the same locations from the 64 version. Everything comes together to once again end the Lylat Wars and stop Andross once again. A nice addition to this trend of re-imagining a classic is the voice acting as well. With the exception of one character (Star Wolf, who still uses his GameCube counterpart) every voice actor from the 64 game reprises their roles in this game. I loved this because I truly enjoyed Star Fox 64 and was ecstatic to play the 3DS version. However, after this familiarity and nostalgia trip subsides, you are brought back to reality. Let us take a look at Star Fox Zero offers us as we take on Andross this time around. 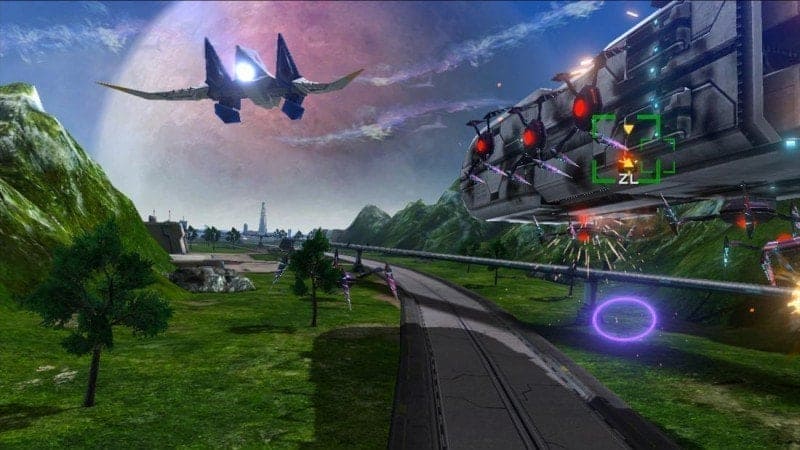 Immediately playing the game, you notice the visuals are not all that impressive. This looks like a launch title WiiU game. As I played, I thought to myself “why does this look bad?” Throughout the game, it looks as if the developer was given a launch WiiU dev kit and just told to do their best. However, that does not make sense considering the game was developed in partnership between Nintendo and PlatinumGames. Both developers are very established and produced visually impressive games. I am not sure what happened here in terms of development, but for a game to release near the end of the WiiU cycle and to look this dated begs the question “What the hell happened during development?”  That was not the only thing that seemed out of place. In addition to looking like a tech demo for announcing the WiiU, it also feels as if it is one.

You have different vehicles to control as you take the battle to Andross and his forces. You have your Arwing (jet), Landmaster (tank) which transforms into the Gravmaster as well, Walker (jet/chicken hybrid), and GyroWing. I will list the control scheme for each below 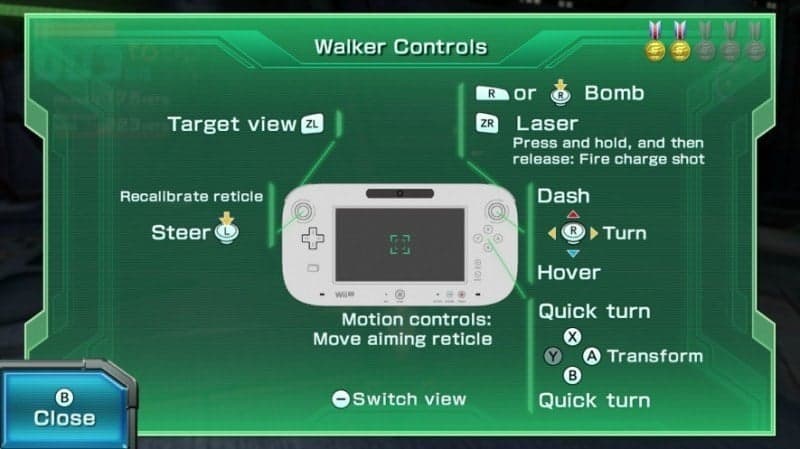 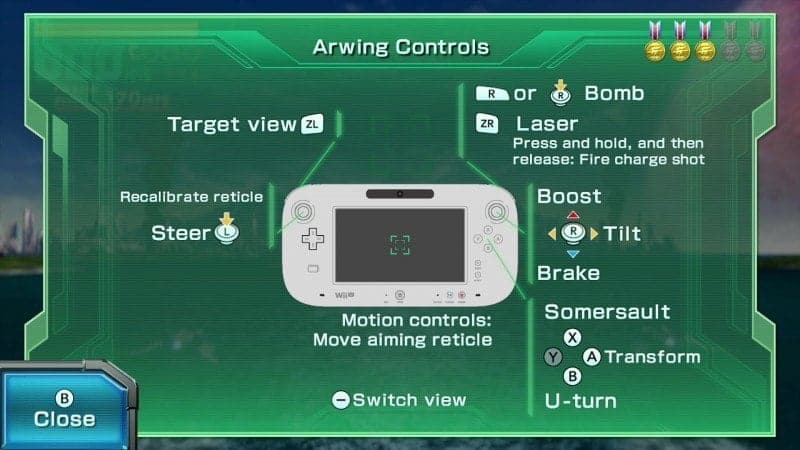 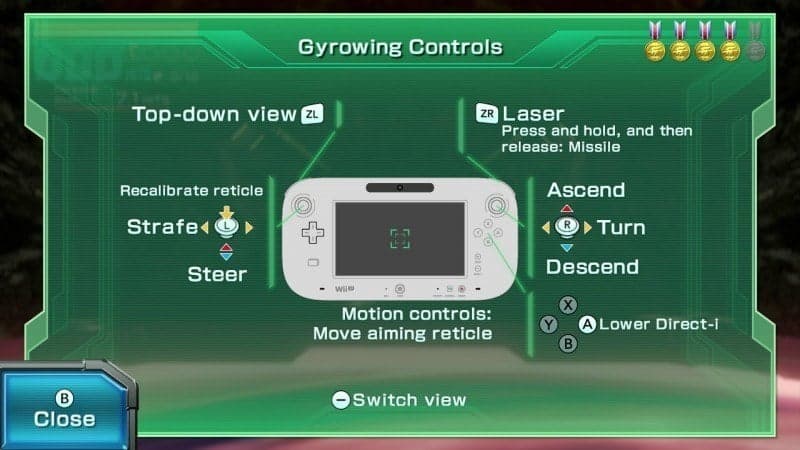 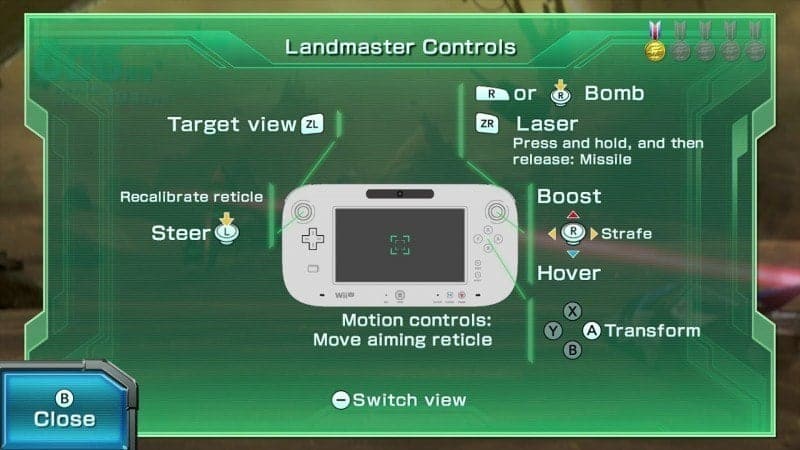 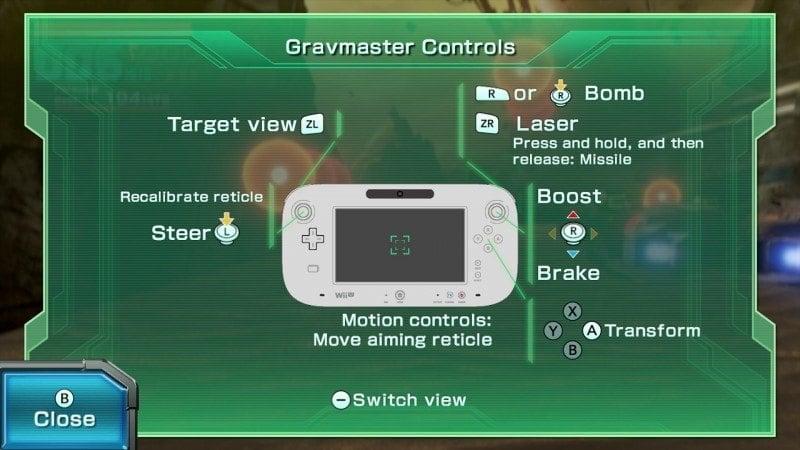 As one can see, the controls may have some variation, but have the same foundation. This was not the issue I had. My issue is the forced motion controls, gyro controls, and gamepad cockpit view. No matter which vehicle used, they all suffer this same issue. You control the movement of your vehicle using the left stick, aiming with gyro movement, and fire. This was remedied a bit with the use of the alternate controls that were added into the game. 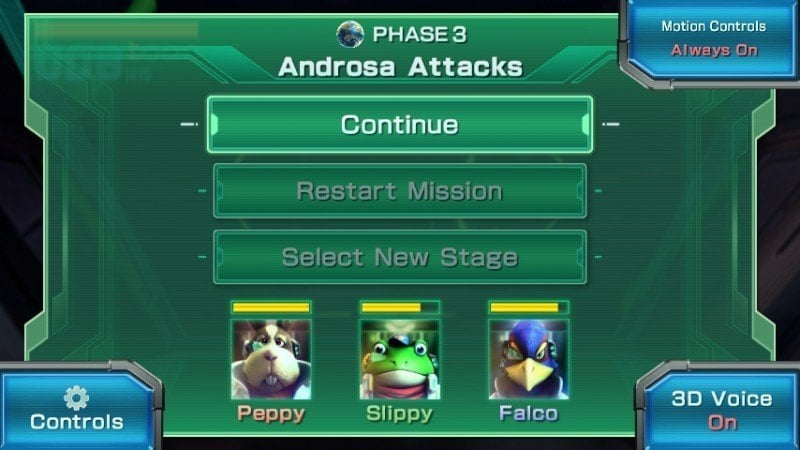 ^ This is the view on the gamepad. simply click the top right where it says “Motion Controls” and it mounts almost all motion movement while pressing ZR. It almost remedies all issues, except for when the game forces the terrible motion controls on you. For example the first stage of the game, you have to save an individual who is trapped in a tower while it’s being attacked. While you think you have the controls down, the game suddenly forces ZL, or target view, to be on during this entire sequence. 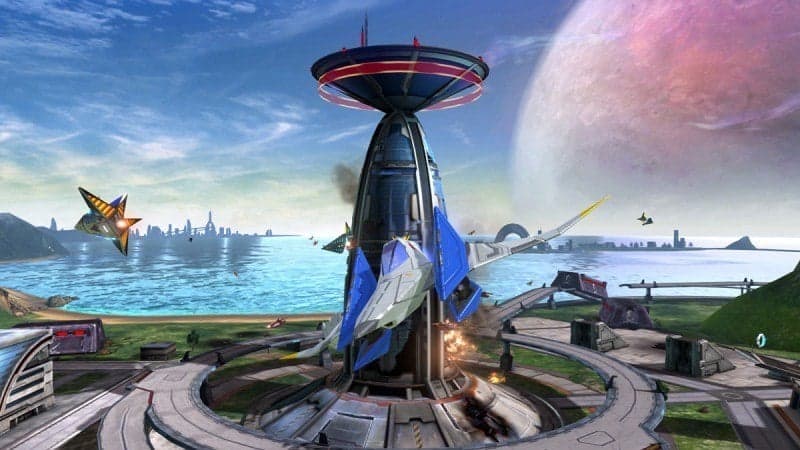 ^ Actual screenshot described above is right here. This is the actual view on your TV screen. You have no idea where you are flying, you are stuck in this target view. What do you do? You look on your gamepad and have to focus on flying in cockpit view while destroying enemies. It is a bit cumbersome for several reasons, such as difficult to fly and clunky controls. if you use the normal “always on” motion controls, it makes this sequence (or any all range mode sequence) nearly impossible to accomplish. you will look on the pad, turn or sorts of directions and crash constantly. With the alternate controls (ZR activated) it helps a bit. The issue with the alternate controls is you rely on the gamepad to see, and once you press ZR to shoot, motion controls are activated until you let go. it will cause you to miss your targets several times until you get passed that learning curve.  I had to find myself recalibrating the controls several times this occurred. This does not only exclusively happen in this sequence, but several bosses use this same “forcing target view” camera on the screen which makes you rely on the gamepad way too much no matter what scheme you use.  This is also just a brief description of how it operates in your Arwing. The other vehicles operate the same way except for one. That is the walker. 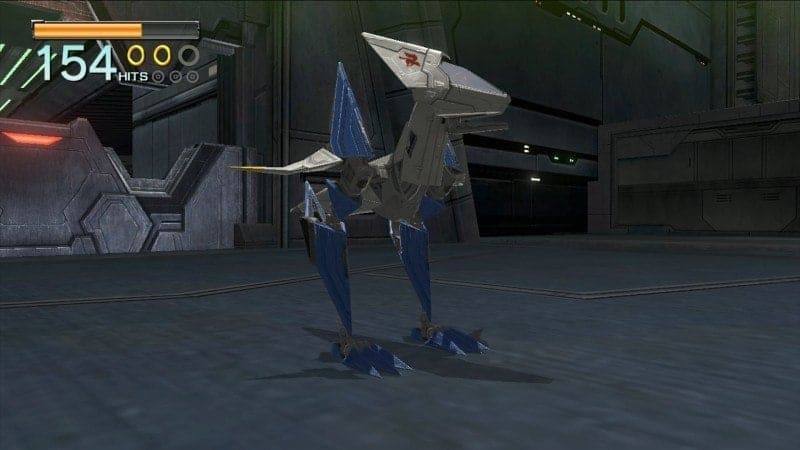 I kid you not when I say this, but in my opinion out of all my years of video gaming (around 25 years), the walker has the worst controls of any game I have ever played. No matter what control scheme you use, it controls poorly. It forces the mandatory use of motion controls (despite choosing alternate controls), the gyro aiming, and using both screens AT THE SAME TIME. This poses several issues. you literally have to hold your pad right in front of you and keep looking at both screens back and forth. When you aim, you have to rely on the gamepad to aim and shoot at targets above you or at difficult angles since you cannot aim any other way. You will constantly have to recalibrate the controls while firing your weapon, moving, and focusing on both screens so you do not die. Who thought this was a brilliant idea and/or how did this pass quality assurance baffles me. It is not user-friendly in the least bit.

The game takes every opportunity to force every wiiU gimmick control in this game and is not shy at the very least while it does it. It just makes me constantly think “This really feels like a tech demo, who thought this was acceptable?” It really left a sour experience no matter what control set I used due to the forced WiiU gimmick controls. However, if you are going to play this game, I recommend the alternate control over the default “always on” controls. It makes your experience better almost overall.

This is what surprised me. While the game looks like a tech demo and plays like a tech demo, the audio is amazing… until they force the WiiU gimmick audio as a mandatory thing. As I previously stated, nearly all original voice actors from Star Fox 64 reprise their respective roles in Star Fox Zero. They all do a fantastic job doing their voices (some sound the exact same while others improved). The music is fantastic as well. Every music track in the game is fantastic to hear and enjoyable as you do battles. Below is Star Wolf’s Theme in this game I linked (using a pop out link so it won’t affect your reading of this review). It sounds amazing. It brought up childhood memories as I did space battles against him. I felt in the zone and enjoyed every second of it.

There are also several other amazing tracks in this game. However, as most of the game forced the gimmick nonsense they also force it in the audio. I mentioned that the voice acting was fantastic. Now imagine no voices coming out of your TV. You wonder where are the voices as you turn up your TV. You hear the fantastic music, but where are the voices? You suddenly hear something coming from your gamepad (which I keep muted by default). I turn it up to find out that the voices come from the gamepad…. and nowhere else. I get it, force the audio gimmick to make you feel as if you are in a cockpit along with “3D audio”. However, it was just an annoyance. By default with any console video game, or any device hooked up to a TV, all audio comes out of the TV. This, however, forces the gimmick to make it on a gamepad. The 3D audio did no better either. The 3D audio is a fancy way of saying surround sound on your gamepad. It is terrible, I recommend turning the 3D audio off so you can at least hear the voices clearly. At least the wonderful music comes out of the TV and is not impacted in any way. 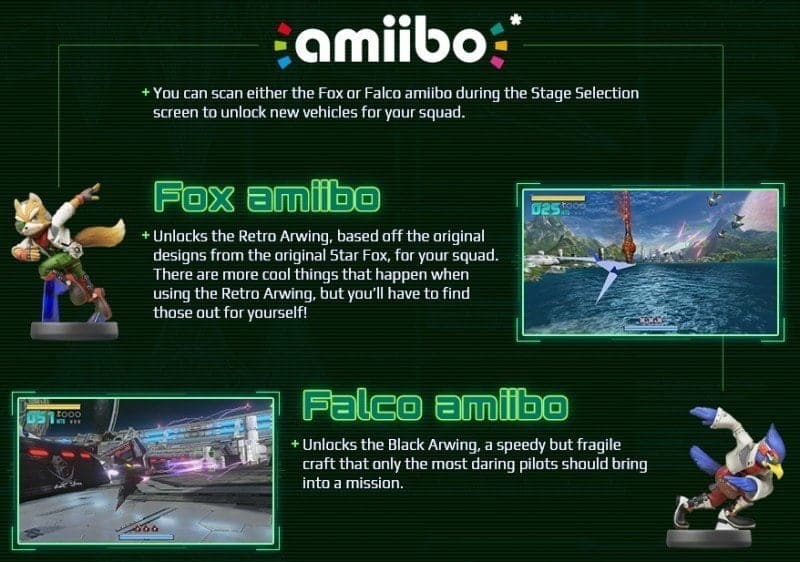 Some of the smaller features of Star Fox Zero (or included with it) are as follows: 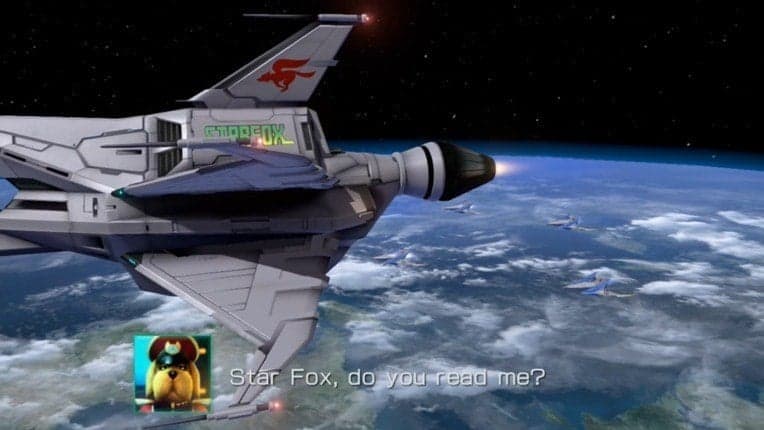 Overall, I enjoyed my time with Star Fox 64. I can see where much of the dislike with other reviews comes into play, some of which is justified.This is a Star Fox game through and through. However, it feels like a reimagining of a much better game that we should have received at the launch of the WiiU and not near the end of its life cycle.  With clunky controls, forcing WiiU tech gimmicks, and dated visuals (for a new release) it is hard to enjoy this experience as I did with past Star Fox games. As stated it several times in this review, but this truly feels like a new console tech demo.  The price of the game is 60 US dollars. If you want to purchase the game, purchase it for 20-30 dollars and do not pay a dollar over 30. Rent it from Gamefly as well if you want a taste and see if it is your thing. Star Fox flies once again, but barely glides by in Star Fox Zero. Hopefully, we will get another title on NX that does not force tech gimmicks.

Now if you would excuse me, all this Star Fox talk makes me want to take to the skies once again. I am off to replay Star Fox 64.

A gamer and jack of all trades. I enjoy many things, but overall just enjoying life. Hopefully, I can add enjoyment to your life through my articles or interactions.
@mgs2master2
Previous Possible 100% Reliable Kernel Exploit For WiiU on The Horizon?
Next dlclose exploit for PS4 updated to enable dev menu!