Microsoft has been pushing Windows 10 every hard and most of us that are still on Windows 7, 8 or 8.1 don’t want to update but they keep trying to push it on to everyone. Lately, Microsoft has been even more aggressive with pushing Windows 10 on to Windows 7, 8, & 8.1 users were it automatics tries to download the OS to be installed, but not to worry as Never10 is a free tool to stop it altogether. The great part about Never 10, is it does not install any software and it does all the system editing for you, so no need to manually edit the registry on your PC. 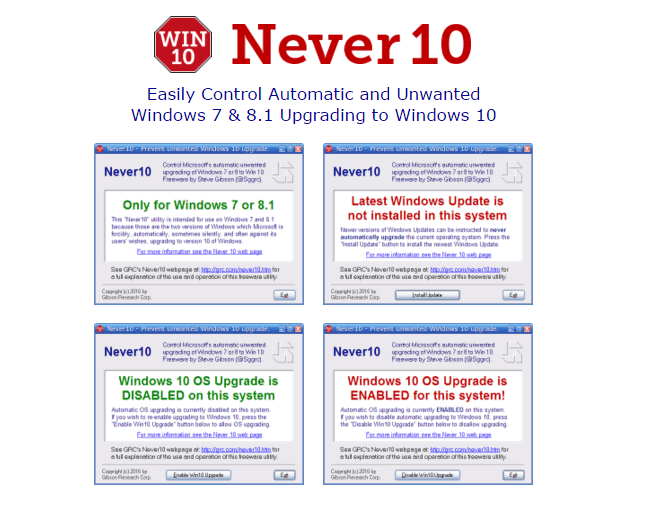 The name “Never 10” is a bit of an overstatement, since this utility may also be used to easily re-enable Windows operating system automatic upgrading. But the primary reason for using this is to disable Windows’ pestering insistence upon upgrading Windows 7 or 8.1 to Windows 10.

Many users of Windows 7 and 8.1 are happy with their current version of Windows, and have no wish to upgrade to Windows 10. There are many reasons for this, but among them is the fact that Windows 10 has become controversial due to Microsoft’s evolution of their Windows operating system platform into a service which, among other things, aggressively monitors and reports on its users activities. This alone makes many users uncomfortable enough to cause them to choose to wait. In line with this, a few months into 2016, Windows 10 started displaying unsolicited advertisements on its users’ desktops. Others dislike the changes Microsoft made by merging their failed “tiled” smartphone user-interface into the Windows UI. And, finally, some object to being force-fed whatever Microsoft wants and simply wish to choose for themselves.

Since this utility simply updates and/or configures the system to prevent or allow,
OS upgrading, it may be deleted after it has configured the system appropriately.

I like to get everyone the right info and I like to help others get the most from there electronic devices. I enjoy playful cleverness and the exploration of technology. My Motto: You own it, you can do whatever you want with it.
Previous Nights of Azure is here to slay your weekend plans
Next How to turn off Windows Telemetry on 7, 8, 8.1, & 10