Number one iPhone app ‘Color Switch’ made without coding

Color Switch, current leader of iPhone App Store charts in 34 different countries around the world, was made in a development software called Buildbox without using any coding.

Buildbox is a development software that does not contain any option for programming or scripting. Creators can only drag images into a level editor and change their physics and control properties.

In Color Switch players have to tap a bouncing ball through different obstacles. As the ball color changes it must match the obstacle’s color pattern in order to pass through. With each color switch there’s also a different power-up to use. 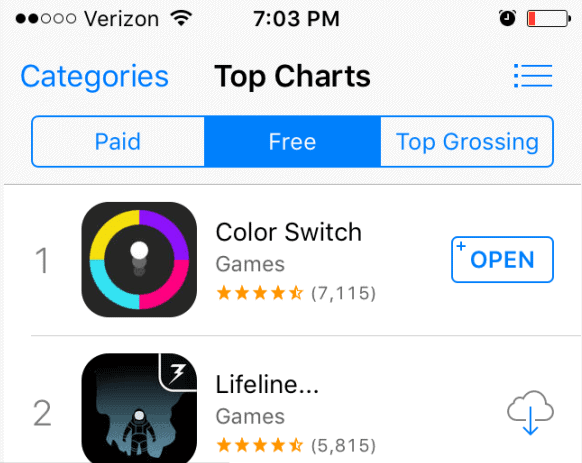 “Wow, I can’t believe it … it feels unreal still. Honestly it never would have happened without Trey [Buildbox Founder] and his dream of making amazing software that would be able to be used by anyone. To this day I can’t write a line of code yet I have the #1 game in the USA and many other countries. Thank you Trey and your awesome team!,” said David Reichelt about his success.


Game’s publisher Fortafy Games later announced that they would team up with development house Eyebox Games to port Color Switch to native code so they could add custom features. Gameplay won’t be affected. Also, these custom features will be available in Buildbox 2.0, which should be released in Q1 2016.

Another game made in Buildbox, The Pit, is currently in the Top 50 All Apps in the United States. During the last year, 31 games made in Buildbox managed to get in the App Store’s Top 100.