When Nintendo was founded in 1889, they started with humble beginnings. Before becoming a major player in the video game industry, their first product ever were Japanese playing cards known as Hanafuda! You can read about Nintendo’s History: The humble beginning here.

Similar to the western card deck, Hanafuda are playing cards of Japanese origin that are used to play a numerous number of games. Hanafuda (which means “flower cards” in Japan) features high-quality cards with beautiful artwork.

Today, Nintendo makes a tribute to history by making a new set of Mario Hanafuda cards to be released in November 2015! This specific Nintendo set was once previously released exclusively for Club Nintendo in 2007; this time, everyone is eligible to get their hands on these very well-made Hanafuda cards. This new set of Hanafuda cards comes in choices of Red or Black casing and features astonishing Mario artwork from the Super Mario games as well as updates with spin-offs released over the years (like Luigi’s Mansion), and incorporates the elements of timeless Japanese Hanafuda design. 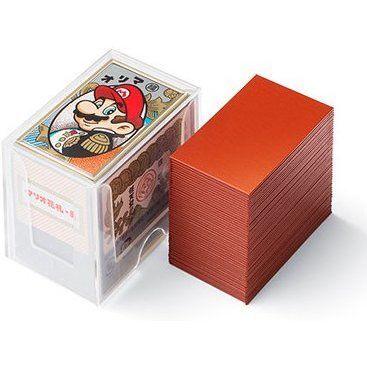