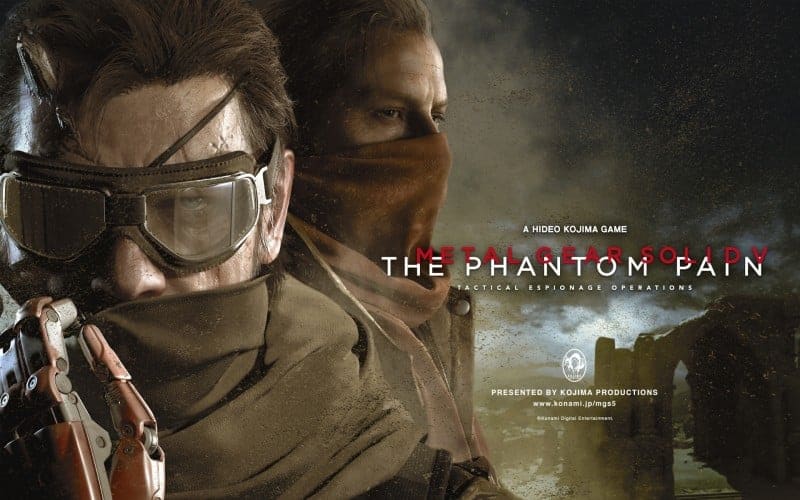 Silliness apart, the last year has been turbulent after the release of Ground Zeroes. A path full of diatribes between Konami and Hideo Kojima, a twosome that, at least recently, seemed to have put aside the personal disagreements in the name of one of the biggest games of the year: Metal Gear Solid V: The Phantom Pain. A history of Vengeance born from the mind of the most inspired game designer of the world, an artist that after 28 years has realized a very masterpiece.

Needless to say that Metal Gear saga has been always linked to the world of cinema, because of long FMV that occupied a big part of the game session. Things have changed thanks to the developing techniques and next gen hardware possibilities, that used since Ground Zeroes have permitted the realization of the VISION of Mr. Kojima but still remain linked to a cinematographic culture.

The most intriguing thing of MGS V is the complete open mechanics, varied and strictly addicted to the player gaming approach during a mission. More than an open world, the structure of the last adventure of Big Boss is free of pre-setted routes typical of AAA games. Every mission has infinite possiblies, from full stealth to “rambo mode” that blended with a well programmed AI it becomes a very enjoyable experience and irresistible.

You can chose to face a mission during the day of night from the beginning of the dispachment or during the mission by using the phantom cigar, a sort of e-cigar (yes big boss invented e-smoke) that with a mixtures of medical plants, allow you to pass the time at high speed. More if your mission is to take out an objective, doesn’t mean you have to “kill” the target but you can forcibly “extract” it with the fulton recovery system, that most you guys have used it in Peace Walker, with the intent of expand your Mother Base.

Another thing I love is that enemies locations changes when you die during a mission, so you can’t go on with mnemonic replay. Every single time is a new experience. For instance if you play all the missions during nights, the enemies will adapt to you wearing night vision googles or if you take off with sleeping gun’s head shots they will wear metal helmets.

Tactics and ambient study is a fundamental component. There is more than a way to accomplish a mission and, as Kojima said, no one will finish an objective in the same time of another player. If you keep dying enter a facility from the front door, is sure that there is another way through the roof or the drain channels.

Implement a strategy it assumes different shades once unlocked all the buddies. Although Big Boss works alone, in TPP you can go though missione with the help of a companion. The D-Horse for moving around, DD the lovely dog that help you finding and take down enemies, Quiet the sniper and the D-Walker usefull when things goes bad.

Buddies are part of the equipment that you have to chose before starting a mission, but this doesn’t mean that during the mission you can’t change it, through your iDroid you can request to Mother Base the launch of another buddy or supplies and aerial support, assuming you have enough GMP (game value).

But how do you obtain GMPs? As well as completing episodes, the value is strictly linked to resources and staff of Mother Base. Real “game in the game”, MB is fundamental strategic component of the last work of Kojima Productions. Derived from its counterpart in Peace Walker, the base of Diamond Dogs operations is necessary to expand Big Boss weapons and accessories that are indispensable for going though the missions. Once you’re familiar to the Fulton recovery, you can extract everything you need on the field, from militaries to containers or vehicles.

And right there, between flights and the other, we could deepen the story with audio recordings. TPP embracing a more solid gameplay and a more limited method of storytelling, it is getting much closer to the search of the details and the pleasure of discovering certain aspects of history through tapes full of dialogues. This doesn’t mean that the narrative component has suffered a backlash. Indeed, focusing on episodic structure, Hideo Kojima has managed to pull out of high moments of cinematography, written and directed by the most virtuous techniques of screenwriting and directing.

The plot, dark and deep, advancing slowly by placing the player in a swirling continuum possible only in the world of video games: the persistent silence of Big Boss and the use of cameras that go from first to third person and vice versa, contribute to an identification massive and all-encompassing that makes intense short video sequences. Solutions that arise from an author with a love and knowledge of cinema unprecedented, who vents his desire to visually tell the depth of his characters between handycam and suggestive lens flare.

There was much talk of the importances of Hideo Kojima at the helm of a series that has meant and means so much to our medium, and I fear that the net of all the endless positive aspects of the gameplay attributed mainly to the development team. Its unique trademark is necessary for the success of Metal Gear. Even music combinations, close to the fabulous era of the ’80s in which the game is set (Midge Ure, Joy Division, The Cure, Spandau Ballet) and in some cases faithful to the themes narrated, are not left to chance in the pivotal moments of the storyline.

Metal Gear Solid V: The Phantom Pain is one of those games with Japanese soul, devoted to perfection and fun as the golden age of game design of the land of the rising sun.

My advice is to forget about other games and play it straight. TPP is the sum of 28 years of Metal Gear saga and who cares about what Konami is going to do but for now this is “A Hideo Kojima Game”

I dig the web to find always fresh news about the tech world, from gaming to smartphones through pc and reviews. I've grown with bread and videogames since the first time I saw one.
Previous PS3: Rebug 4.75.3 released fixes minor problems
Next Metal Gear Solid V: The Phantom Pain – How to Unlock Bonuses