Bigboss (aka psxdev on twitter) is at it again and this time he has released ps4client and ps4link. If you don’t know who Bigboss is, you may recall his recent work on the PS4 camera, which you can read about here. He also added camera support to the PS4SDK and made a few commits too. Bigboss has made quite a few tools for the scene lately, like debugnet, psp2link and psp2client for the PSVita. 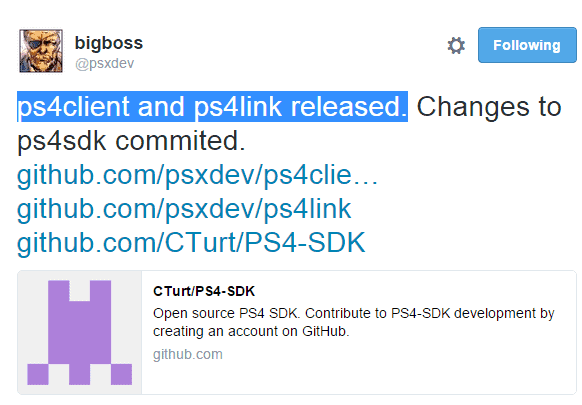 Now I know this does mean much for everyone, but it shows you that the PS4 scene is continuing to move forward. Just a few days ago, CTurt showed a homebrew pong working on the PS4 via the webkit and he was using a DS for a controller. So the more developers that get involved the faster we might see some real homebrew come to the PS4.

So what does PS4link do?

PS4link is a library for PS4 to communicate and use host file system with ps4client host tool. It is the same method that we used in ps2dev days, so basically it is the same protocol than ps2link and ps2client have been using since 2003.

So what does PS4client do?

PS4client is a host tool providing host file io system for PS4. It is the same method that we used in ps2dev days, so basically it is the same protocol than ps2link and ps2client have been using since 2003.

It provide all io request operation availables on ps4link library. Now commands are not implemented but it can be easily incorporated.

By now only osx confirmed to run fine.

You can find all the resources for PS4link here and PS4client here.