It’s that time of the week where you give your hard earned strange coins to the mysterious Xur: Agent of the Nine. Those of you unfamiliar with Xur or perhaps new to the Destiny universe, Xur sells Exotic armour, Exotic weapons and more at the cost of Strange Coins and Motes of Light.

Xur can be located in the Tower near the Vanguard masters/vendors this weekend until 9am GMT Sunday, June 28.

Here’s a look at Xur’s inventory this week:

Red Death – Is it worth the buy?

Here’s a few things you need to know about the Red Death, if you were on the fence about buying it or not. The Red Death is an exotic primary weapon, and a Pulse Rifle. With a bayonet attached at the front of the weapon full of blood, the red skull crossbones reflect sight is enough to scare anyone to their core, especially in the earlier days of Destiny’s release.

Killing an enemy with this weapon, whether Guardian or Non-Guardian in PvP or PvE – this gun grants 100% health regeneration.

“In addition to 100% health regeneration, each kill boosts Guardians with a faster reload. this significantly changes the flow of your game to deliver kill streaks and multi-kills that are otherwise broken up by long periods in cover.”

On the PvE side of Destiny, this gun was especially handy in the early days of the Crota’s End raid which launched with the Dark Below expansion back in January.

The reason for this was in the last section of the raid on hard mode, where you go up against Crota, there is no life-restoring Chalice to be found like in normal mode due to the Presence of Crota debuff.

That’s when players had to get creative and use the perks of weapons and gear to help restore the health back to full.

For instance the Red Death restores health 100% after each kill, whereas the Suros Regime Auto Rifle perks highlights that, “the bottom half of each magazine deals bonus damage and has a chance to return health when dealing damage.” 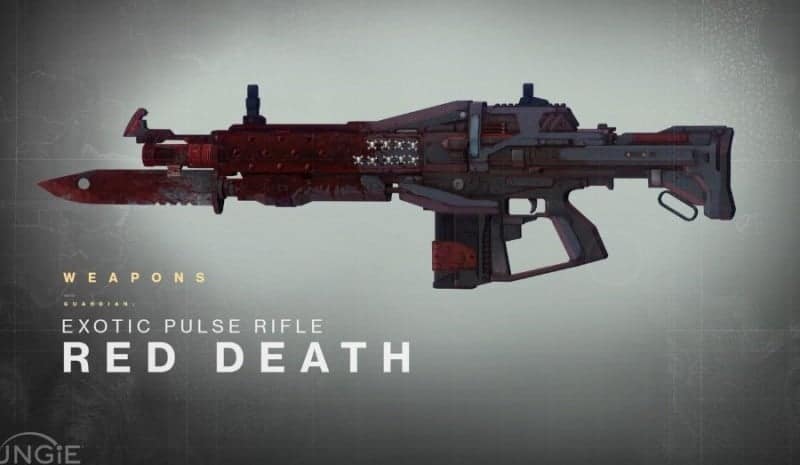 More good news with regards to Pulse Rifles can be seen in the 1.1.1 update for Destiny, where Pulse Rifles saw a 9.7 percent damage boost across the board.

For those of you who don’t know where to find strange coins to earn, they can be rewarded to players at the end of Weekly Heroic Strikes or even during a Weekly Nightfall Strike.

What do you think about the Red Death and all the other goodies in Xur’s inventory this week, worth the buy?

Don’t forget to follow us and hit us up on our official Twitter pages for more news and reviews on the latests hacks, software updates and games here at Hackinformer.