Hey guys, ss4gogeta069 back with another retro review! This time it’s Sword of Mana. Now you may be thinking, you idiot, it’s Secret of Mana! That is exactly what I thought when my friend Gaarasaiyan suggested it to me. 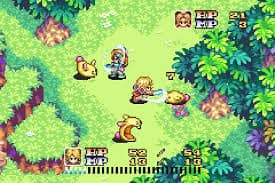 However, this one is on Gameboy Advance and it is a rare gem! It resembles Secret of Mana in combat and in-game menu and it should, considering it’s the sequel to it. I never knew it existed until I was prompted to play it. Anywho, this is a great game.

I normally have a hard time staying interested in retro games that I play for the first time these days but this one has held my attention fairly well. The story follows a boy and a girl. You can play as either but you must name them both as they don’t come with default names.

The girl was rescued by the boy’s family and because of this the boy’s parents were killed. He was directed by his mother to take care of the girl and get her to safety. They were separated and both thought the other dead. Years later they meet up, having the same name and age but are both skeptical of the other being “that person” so they say nothing. Eventually they figure it out and begin a quest to find out why the Dark Lord is trying to eradicate the Mana Clan, to which the girl belongs while also avenging his parents’ death. It’s quite an interesting story.

The gameplay is pretty good. You don’t have to be an expert action RPG player to succeed. Your level up system is new. You have several different “styles” you can level up with each bringing their own attribute additions which you can see before you make a decision. You’ll earn certain “titles” when you reach certain level milestones with types. The titles add big time attribute boosts to your character. There is magic as well as good old fashioned melee combat. With Secret of Mana styling it is sure to catch your eye.

I honestly haven’t attempted to cheat because, as I suggest in my previous review, I always try my best to play through legitly before cheating. It gives a sense of accomplishment and a feel for what the true fans of the game originally struggled with. I’m sure with a little searching you can find all of the cheats you can handle. So, as far as a rating goes, I think this one deserves a 6/10. It’s far better than most retro games you’ll get your hands on. Thanks for reading and keep your eye out for more retro reviews! HAPPY GAMING!!

Just your friendly neighborhood redneck from Alabama keeping things interesting. I cling to my God, my games and my guns! Roll Tide and HAPPY GAMING!! You can find me on Facebook and Twitter @johnfrazarjr
@JohnthePooka
Previous Star Wars day: May the 4th be with you PSN Sale & more
Next Duck Hunt homebrew gets an update after 3 years!