It’s been almost 3 weeks since Smea‘s Ninjhax was released. During that time, many interesting homebrews have been released/announced.I would like to outline the current state, which homebrews are worth keeping an eye on and tell you some basic info about each of them. 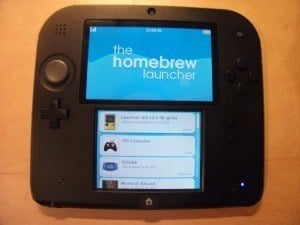 The homebrews are not sorted, I was writing them as they were coming to my mind. Attached videos are not mine. For more information, go to enclosed links to GBAtemp/GitHub.

GameYob:
– GB/GBC (not GBA) emulator, a port of the DS emulator of the same name
– developed/ported by Drenn  (GBAtemp profile)
– GBATemp thread
– Download
Nice GB/GBC emulator (still in alpha), which can play most ROMs (all homebrews I’ve tried worked). It runs fast, sound is good, save-state works perfectly.
Scalling is planned to be added (high-priority). Other functions which are planned are: using the circle pad, palette changing and GBC bios support.VIDEO (short, starts at 4m)

3DSGBA
– GBA emulator
– developed by Steveice10 (GBAtemp profile)
– GitHub repository
– Download
One of the newest homebrews, so it’s still in a very early stage. It runs very slowly and there’s no sound.
Despite these deficits, I think it’s a promising homebrew and I’m looking forward to see how it grows. VIDEO World of 3DSand
– a sandbox game, a clone of the simulation game “World of Sand”
– developed by Steveice10 (GBAtemp profile)
– GBATemp thread, GitHub repository
– Download
This sandbox game allows you to control falling  particles of different elements. Pretty cool homebrew that’s fun play with. I wouldn’t mind if the function to save/load what you create was added.

3DSController
– application
– developed by YoshiInAVoid (GBAtemp profile)
– GBATemp thread, GitHub repository
– Download
This is definitely so far my most favoured homebrew. It allows you to use a 3DS as a wireless controller for your PC (windows). It’s easy to install and customize (custom key bindings, port, controllable throttling amount). Current version is 0.3.
It’s planned to add support for using the touch screen as a keyboard, create some GUI, etc. Android/Linux support is not currently planned, but may be considered in the future. People who donate YoshiInAVoid any amount any amount of money will receive new versions of 3DS Controller before they are released publicly. VIDEO

blargSnes
– SNES emulator, reuses a lot of lolSnes’s code (SNES emulator for DS by Mega-Mario)
– developed by StapleButter (GBAtemp profile)
– GBATemp thread, Official site
– Download
SNES emulator, whose verson 1.2 was released recently. A long list of functions contains e.g. scaling support, scrolling, custom borders or SRAM with auto-saving. Emulations itself is good and so is the sound (sound doesn’t work on New 3DS though). Unfortunately, about 50% games are not working. (compatibility list) VIDEO

At the moment it is akin to a very basic version of Minecraft’s creative mode : you can run around, fly, destroy blocks, place blocks, all in an infinite world generated procedurally in real time. All modifications made to the world are saved to the SD card so that progress isn’t lost. Best of all, the game can run in stereoscopic 3D and it looks, like, really cool. VIDEO

Some other worth at least mentioning:

DownloadMii
– a homebrew online marketplace
– developed by filfat (GBATemp profile, twitter, official site)
– GBAtemp thread, GitHub repository
Filfat’s project, currently still in the stage of development. If you are wondering about the “Mii” part, filfat says that if everything goes well and he doesn’t get bored, DownloadMii will be multiplatform in the future. Release date is unknown.

3DNES
– NES emulator
– developed by St4rk (GBAtemp profile, twitter)
– GBAtemp thread
St4rk said that he works on a brand new version of 3DNES for Ninjhax, including new GUI. After being busy, he is probably back at work now. No further information about release have been said.

r3Ddragon
– Virtual Boy emulator, port of Red_Dragon (which was based on Reality Boy)
– ported by mrdanielps (GitHub profile)
– GitHub repository
At this moment, r3Ddragon is not PoC anymore and can actually run stuff. According to mrdanielps, it works when compiled as .3dsx.
VIDEO (this video shows running r3Ddragon, but not via Ninjax, its purpose is to show how it runs)

“Lua Player Plus is officially the first LUA interpreter available for 3DS. At this time, it allows only basic screen functions in order to make an hello world but we’re working hard to implement a lot of features in the near future.”

That’s about it, I hope you liked this article and I managed to maybe clean up some things for you (and to avoid saying BS). If you have any comments or questions, use either comment section or twitter.
See you next time.