Adding more PS1 Classics to your Vita, than Sony lets you

As amazing as TN-V is, in my opinion some PS1 games are still completely unplayable (even with the recent updates to TN-V). The lag I can somewhat live with, but the lack of good sound, at least for me, is the straw that breaks the camel’s back. Specially games heavy on FMV cutscenes like Metal Gear Solid. Unfortunately for those of us living in the US, the selection of PS1 games on the Vita store isn’t up to par with the PSP or PS3 stores and is missing some amazing games.

Don’t get me wrong, there are a lot of great PS1 games available for download directly to the Vita, such as Parasite EVE 1 & 2, Syphon Filter 1,2 & 3, The Final Fantasy’s (most of them I believe,)  Xenogears, Chrono Cross & Chrono Trigger, etc.. but the list is missing some of the best games released for the PS1. Fear not though because as long as you have access to a PS3 (why PS4 owners don’t have this option is beyond me considering the amazing connectivity between the two systems, but that is a separate rant) on OFW you can get some of these PS1 must haves onto your Vita!

Here’s what to do. Get access to a PS3 on OFW, doesn’t have to be yours, it can be a friend’s, create a new account and log into PSN using the account that is tied to your Vita. Go to the PSN store, and download the PS1 classic game you want on your Vita, like Metal Gear Solid. Ignore the fact that the game says it is only available for PS3/PSP. Buy the game and download it directly to your PS3. After the game is finished downloading, DO NOT INSTALL IT. Leave it in it’s ‘bubble’ form and connect your Vita to the PS3 via USB ( you can also use the opencma trick if you are on lower FW).  On your Vita open CMA and select connect to PS3 via USB > Copy Content From PS3 to Vita > Applications >PlayStation and select the PS1 game(s) you just downloaded. Hit copy, sit back and wait for a few minutes then you’ll be off playing PS1 awesomeness on your Vita that was previously unavailable. 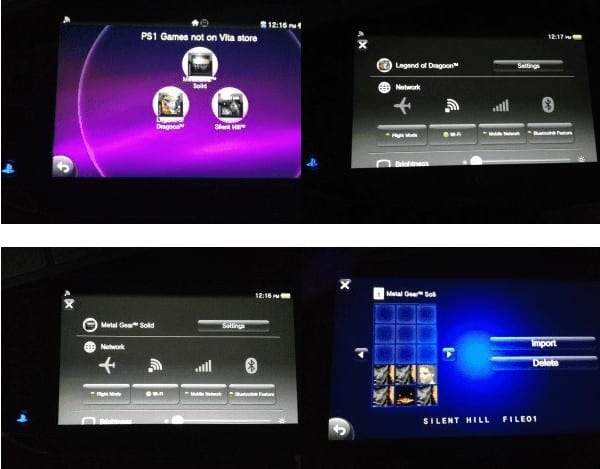 I’ve found several lists of games that are NON transferable using this method and compiled them, but I can confirm 100% that MGS, Legend of Dragoon, and Silent Hill all work great, as those were the games I was dying to have that weren’t available on the Vita Store. The reported games that do not work with this method that I found are:

Although I can’t confirm 100% that these games do not work, it seems to be the general consensus from several different forums I’ve investigated. Lots of forums say Silent Hill doesn’t work, but it works fine as I have been personally playing it on my Vita. If anything, getting Metal Gear Solid on your Vita is simply a must and is worth the hassle of using a friend’s PS3 if you don’t have one, or your PS3 is on CFW. The OLED really breathes new life into these classic games many of us grew up with. You can also check out our full list of ps1 games here.. full ps1 compatibility list

Enjoy your new PS1 Classics on your Vita! 🙂

As usual, questions/comments, hit me up on Twitter @heleius