In the rapidly expanding tiny computer market, there’s the CuBox-i. It’s a 2″ × 2″ × 2″ cube-shaped machine that runs Android and Linux-based operating systems. Mini computers exist thanks in no small part to Moore’s Law, but one running Linux and Jelly Bean is pretty unique. Developer SolidRun isn’t new to the tiny PC scene, but since it released the original CuBox in 2011, it’s stayed relatively quiet. 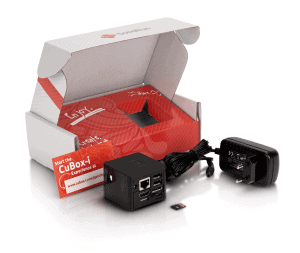 CuBox-i is from the Israeli company SolidRun, The 2-inch cube computers range in prices from the $45.00 CuBox-i1 base model to a fully loaded $120.00 CuBox-i4Pro. They all use i.MX6 Cortex-A9 ARM processors with speeds of 1GHz, ranging from one core to four cores. DDR3 memory ranges from 512MB to 2GB. The $120 unit gets you a quad-core processor with each core running at 1 GHz, 2GB of DDR3 RAM, built-in WiFI and Bluetooth. Regardless of price, each model features SATA support, HDMI 1.4 and optical audio ports, which could make a CuBox-i running the latest version of XBMC the perfect workaround to a bulky HTPC.

CuBox-i computers can be bought here at there shop.. solid-run.com/shop/

SolidRun said in an announcement that the “latest versions of [the] Linux kernel and several of its distributions” are supported, as well as XBMC Media Center and Android 4.2.2.

The rest of the listed features are as follows (asterisks are next to those only available on higher-end models):

CuBox-i is an “open source SDK and tons of available software packages” will help users complete a range of projects with the device, the company said. Potential applications include an “Android TV box,” point of sale terminal, digital signage, media centers, compilers, or integrated development environments. CuBox-i can also act as a basic desktop when docked with a keyboard and screen”.