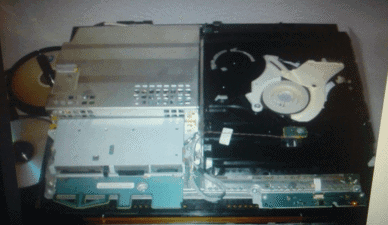 I know it’s happened to most of you. The dreaded yellow light of death. You’re just prancing along in your favorite Black Ops map, about to blow open some n00b’s head with your Galil when your screen freezes up. You get frustrated for having to restart, but as you get up to turn your console off… the three beeps of death. BEEP. BEEP. BEEP. Shutdown.

Utter fear sets in, as you press your button to turn your console back on. She’s starting up, your blu-ray drive spools up, hard drive spools up… then suddenly…

It’s the sound of your $300-600 console evolving into a very expensive paperweight… a paperweight that ate and will not let go of your $60 PS3 game. There goes your Black Ops…

So what can do you in this situation? If you’re under warranty, call up good ol’ Sony and get your unit replaced under warranty. Oh wait… there goes your hard drive’s contents. And to be perfectly honest, I wouldn’t trust Sony to actually get my game back to me. Then there’s the cost of shipping, and the time between actually getting your new *coughrefurbishedcough* unit back.

And if you’re out of warranty? Tack a good $150+ onto the above to get that bad boy replaced. Thank you Sony, for manufacturing and marketing the PS3–a product that is known to have a design defect causing hardware failure.

So you’re probably thinking “But Dan… this is a ‘tips’ entry… so where’s the tip?! I already know all of this you two-timin’ lying son of a…”

Well, I won’t leave you disappointed. If you haven’t heard yet…

YLOD can be fixed at home for a fraction of the time, anxiety, and money that Sony will rob from you.

YLOD can be fixed at home for a fraction of the time, anxiety, and money that Sony will ROB from you!

Let’s get down into the belly of the beast, shall we?

Believe it or not, you will only need THREE tools (and some materials) to get this PS3 down to the core. As I mentioned above, I typically work on fat PS3s, and this walkthrough will cover launch models first. The newer models–especially the slims–are a different procedure. When I get my hands on a slim to work on, I’ll be sure to let you know. 😉

Just to reiterate it–this procedure WILL VOID YOUR WARRANTY! Sony typically refuses to work on any tampered devices, so if you are not comfortable taking your unit apart, stop now and contact Sony or a local shop. If you have enough gall stones to continue with me, then let’s begin the operation!

This is the screw in question–although you’d be hard pressed to find ANY OTHER blue screw anywhere in the console.

At this point, you should see all of these parts laying in your console. If so, you’re doing it right. Good job!

This is the blu-ray drive. See the cable below? It’s not long enough to mess with much, so lift from back to front to see and disconnect the cable before damaging it.

21. Remove the three screws from the side of the unit closes to you.

At this point, your console should look like this.

Bonus PS3 tweak pictured: Bend the two small clips on the right hand side where the unit flops around until it is held tigher and shakes less. That white paste is the stock thermal paste and must be cleaned off prior to reassembly.

Thanks to The1Z for making this video.

Disclaimer: I did not make this video, but it does illustrate a great method of reflowing–the act of applying heat to the primary board to reflow the solder and settle the reality synthesizer and emotion engine chips.

The guide I learned from!

What I use for every PS3 I fix…

Arctic Silver is the compound I personally recommend and use for every console I repair with heating issues! It works amazingly well, is easy to use. Spread a THIN (paper thin) layer on the processors you are looking to keep cool and to transfer heat away from, making sure there are NO air bubbles in the paste, and you’re gold–err, silver. It’s cheap too! A tube should last you about 5-7 PS3 repairs, if needed.

This is one of the most worthwhile investments in ANY modern console repair–a variable temperature heat gun. Without this, you absolutely CANNOT do any type of reflow repair to fix yellow light of death PS3 or red ring of death Xbox 360. Most variable temperature heat guns for for $100-$200 plus, but I’ve found this to be a great bang for your buck.

Isopropyl alcohol is safe to use on all PS3 components when wiping down for cleaning purposes, including the primary circuit board and fan. Use this every time to clean and you will prolong the life of your PS3 significantly.

With the small size of the components of the PS3, I highly suggest opting for a notebook cleaning kit. Any can of compressed air will do, but the extra attachments within this package deal make it ideal for what you are looking to accomplish when cleaning any console.

As ridiculous as it sounds, it’s true. YLOD is caused primarily by the console’s heat being trapped within, heating the primary circuit board to temperatures hot enough to have the solder run and processors come slightly out of alignment. The yellow light of death is the PS3 going into protective mode to keep it from further damage.

So what do you have in place to keep it from happening? You have a variable speed fan, two heat sinks on the processors themselves, and two major ventilation paths to vent as much heat out as possible.

At the same time, you also have the fan blowing in a direction that pushes the heat into the curvature of the top. Where it becomes trapped. Which raises temperatures within the unit.

To make matters worse, if your ventilation system and fan are clogged with dust and dirt… what do you really have? You may as well have used that ill-conceived towel method of fixing the Xbox 360’s red ring of death, because your console is operating at temperatures much too high for it.

So, unfortunately, if you’re under warranty, just stick it out. But if you’re not, or you don’t mind voiding your warranty… then let’s open her up and keep her clean!

1) Take the console itself apart as seen above.

3) Apply alcohol to the cloth and wipe down all of the shell of the console, as well as any dust or dirt that the compressed air did not remove. Isopropyl alcohol is safe to use on the circuit boards themselves, but you have to be extremely careful not to catch the rag on anything and potentially destroy your console for good.

3a) I personally prefer to use paper towels due to the fact that they will rip before they break something on the board. Use compressed air and careful attention to detail to remove any bits left behind, but if you’re a little too lazy to put in that much work, then use a cloth intstead.

4) Reassemble everything in reverse order (be careful with the ribbons, as they can break very, VERY easily), then use the cloth to clean the outer shell.

You now have a clean PS3 that functions as efficiently as when you first opened it and fired her up! Congrats!

Another tip I can give you on avoiding YLOD is to stand your console vertically, with the ventilation on the top and the back of the console!

As I mentioned above, the dome shape of the top of the PS3 tends to trap heat. So by using heat’s principle to rise, as well as the fan having ventilation there, you can easily reduce heat by allowing it to escape naturally from the unit! This is my little trick to keeping them lasting so long, and I tell all of my customers to do the same with their phat ps3s. Just be careful not to knock it over!

Posting the bad boy near a window (but out of direct sunlight!) is also a huge factor in keeping your baby alive.

“YLOD can be fixed at home for a fraction the time, anxiety, and money that what Sony will rob from you!”

Want more?Check out some of these great resources…PS3 Repair Guide (Diagnosis and Repair)Great guide, the one I learned by. The actual repair material is extremely accurate and extremely user friendly! I’ve fixed 17 YLOD PS3s with this guide’s information, and of those 17, 12 have lasted longer than 6 months (and are still kicking). the other 5 lasted 4 months, and have been going strong for a month after a second repair.PS3HaxGreat resource for maximizing the potential of your PS3’s hardware and the latest news for the modding scene!

Check his work out for some true, legit mods for your consoles! (Not software hacks, legitimate hardware modifications such as wraps, paint, and LEDs!)