In a desolated land, humanity no longer exists. However, life is not entirely robbed of the area. Enter Robbie, a robot unit that discovers the last human alive on this planet. It is up to Robbie and his AI partner to care for the human to ensure her survival. Will the team be able to accomplish to care for her, or is all hope lost? Let’s take a journey for survival in void tRrLM(); //Void Terrarium (in the review, I will refer to the game as Void Terrarium). 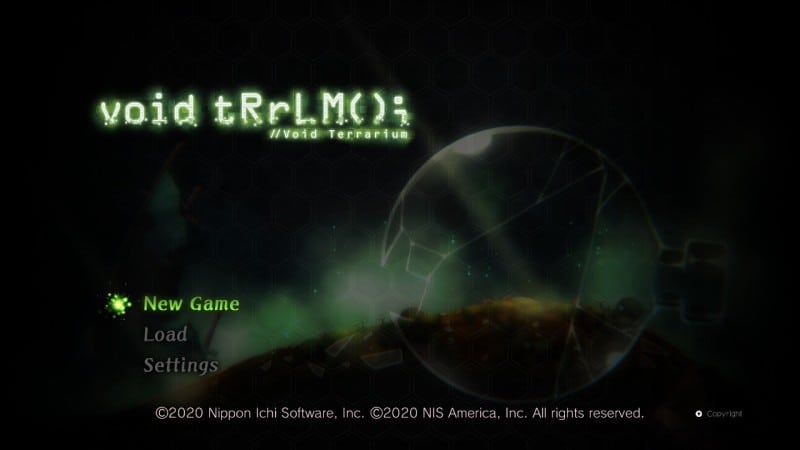 *Thank you NISA for the switch review key* 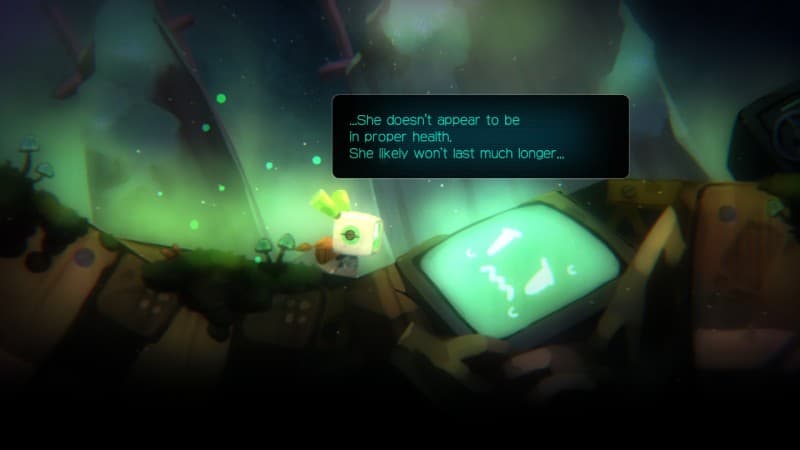 Civilization has collapsed. The surface world has been overrun by toxic fungi.
In a scrapyard deep in the underground wastelands, a lone robot awakens. After wandering the ruins long uninhabited by humans, the robot comes across a young girl asleep in a bed of fungi.
Her name is Toriko.
Mushrooms protrude from her infected body. The robot is intent on saving her from her weakened state and wishes to nurse her back to health.
However, this harsh environmennt will not make it easy. To protect the girl, named Toriko, the robot must create a safe haven where she can live safely, a terrarium.

The PR email elaborates a bit more on the story:

In a world contaminated with toxic fungi, a discarded maintenance robot finds a girl named Toriko on the brink of death among the discarded junk in a scrapyard. After nursing her back to health, it is revealed that she may very well be the last remaining human, and is highly vulnerable to the deadly conditions of the outside world. To ensure her survival, the robot and his newfound friend, a decommissioned AI known as factoryAI, creates a refuge for her within a terrarium. To reinforce the terrarium as well as Toriko’s poor health, the lone robot must venture into the wasteland to gather resources while battling the vagrant machines and mutated creatures that roam there. Along the way, the uncertain future of Toriko’s existence and with her, the entire human race, will slowly come to light… 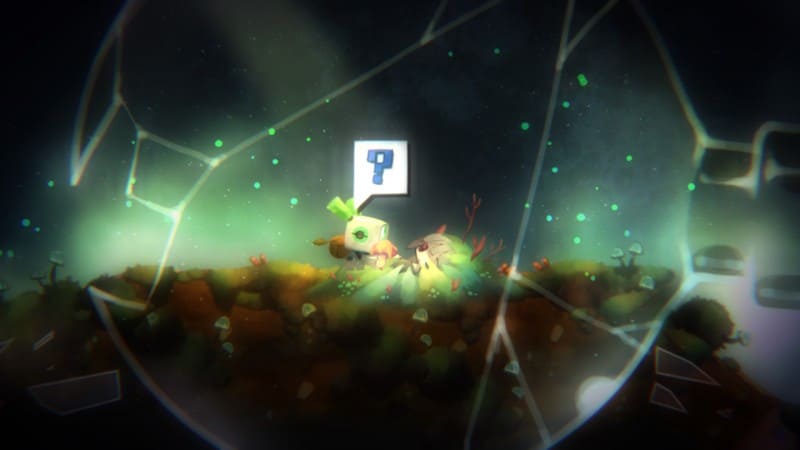 Humanity is in dire need of aid. As it was previously thought to be extinct, all hope lies with Toriko’s survival. The story will send our robot hero, Robbie, all over the land to gain supplies to ensure her survival. With the help of factoryAI, more of the story will be discovered as our hero travels across the land. The delivery of the story is fantastic throughout this journey. A sense of survival and urgency accompanies all of this by taking care of Toriko. The story depends on caring for her via a Tomagachi type style game. 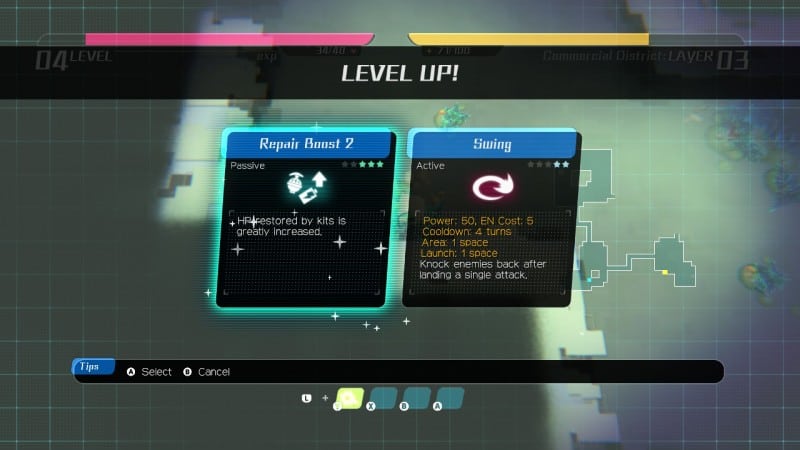 Gameplay for Void Terrarium is mostly a top-down dungeon-crawling Roguelike, with some very light RPG elements, and Tomagachi elements. The game accompanies tutorials at each new feature that is introduced. NISA is very famous for having great tutorials and areas to refer back to it, so no need to elaborate on that here. The dungeon crawling roguelike aspect is random, as expected. The goal in these areas is to collect resources needed to ensure Toriko’s survival, as well as building up the base, and building up Robbie. 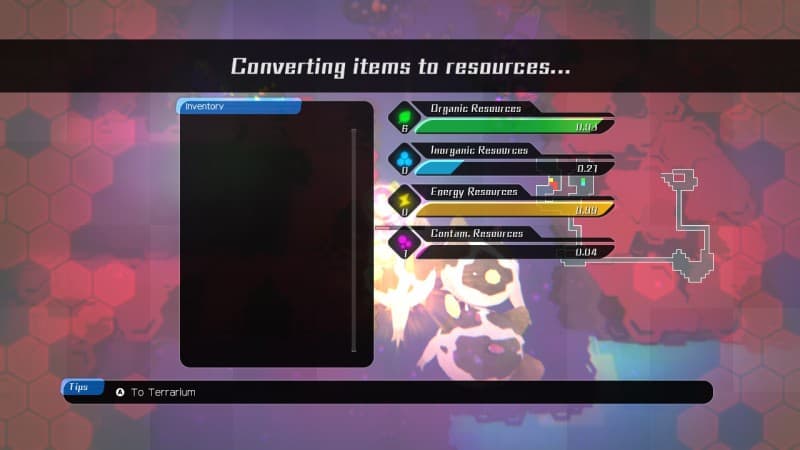 It is good to get the basics down because the difficulty curve of the game ramps up quickly. This is also due in part to the end of each exploration (regardless of the player survives or dies), Robbie’s level resets back to level 1. The reason for the reset is due to everything gathered will become resources. The resources are used to craft necessities for Toriko, improving the Terrarium, or improving Robbie. No permanent stat improvements exist that are obtained from each exploration level, except for those that are crafted. 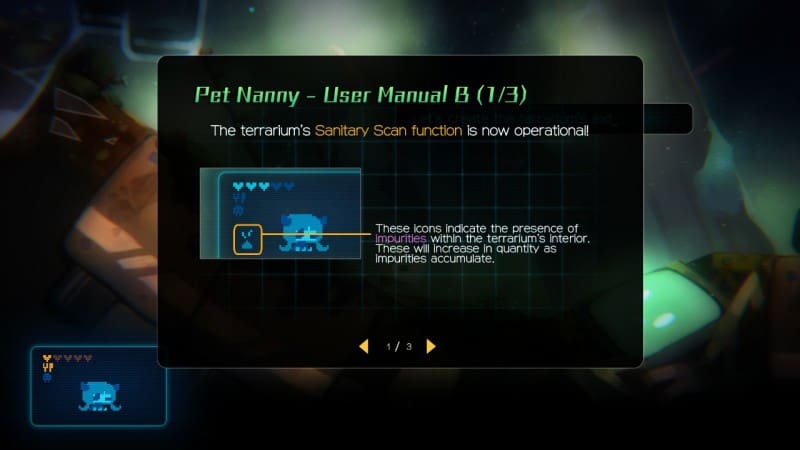 Another component in the game is the Tomagachi elements that are introduced in the game. Once obtained, it monitors Toriko’s overall well-being. It informs the player if she is hungry, sick, near death, good, dirty, and other statuses. It starts very basically when beginning, but it can be upgraded as well. This component delivers a sense of urgency as well to players. While exploring the areas, an alarm can go off. It informs players of the status of Toriko during the journey. Additionally, players can look at this monitor during exploration at any time. Based on what is seen, it can determine what the next step for players to take is. 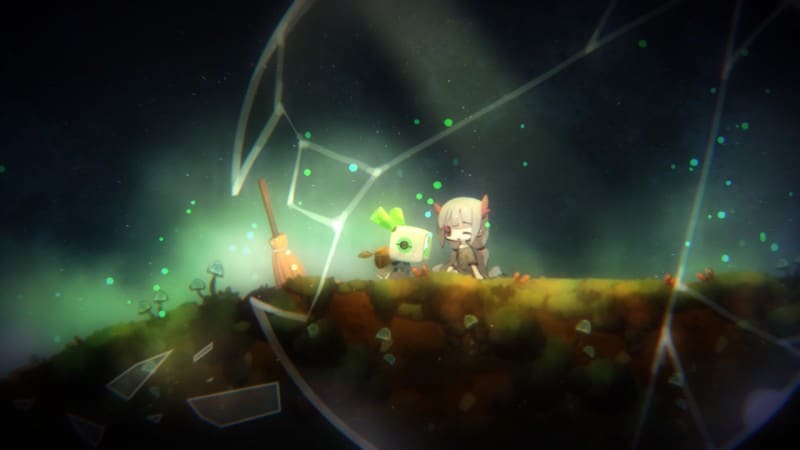 All of these elements mesh-up very well to make Void Terrarium an exciting and fun game. I am taken back and surprised by it. I enjoyed it quite a bit without having any issues in terms of the gameplay. It was the perfect balance of everything wrapped up with a great story that kept it going. 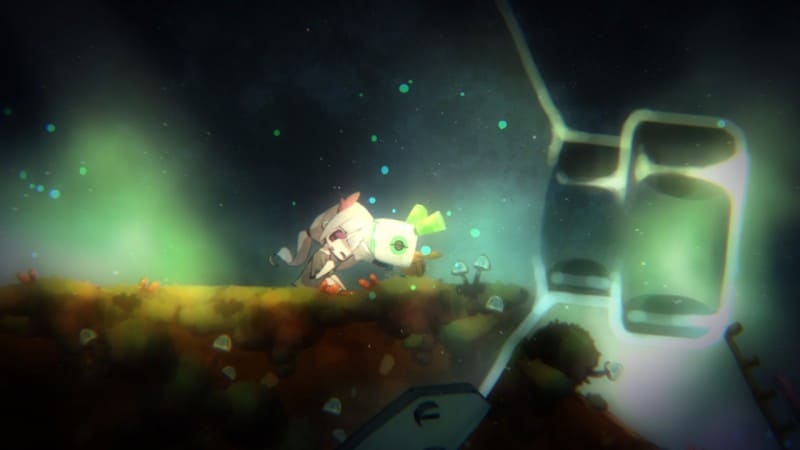 Visual-wise, Void Terrarium looks fantastic for what it is. It is one of the better-looking Roguelikes in the market to date, in my opinion. The visuals match the atmosphere entirely the game is setting. It is a bleak, desolated world, with very little hope and light. That comes off well visually. 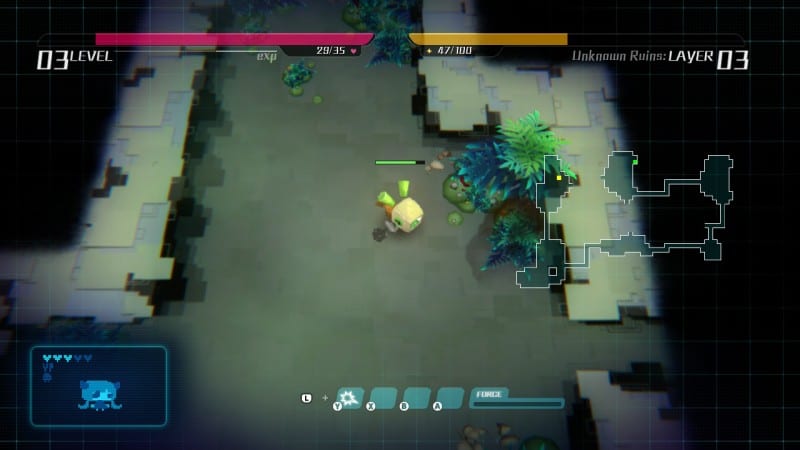 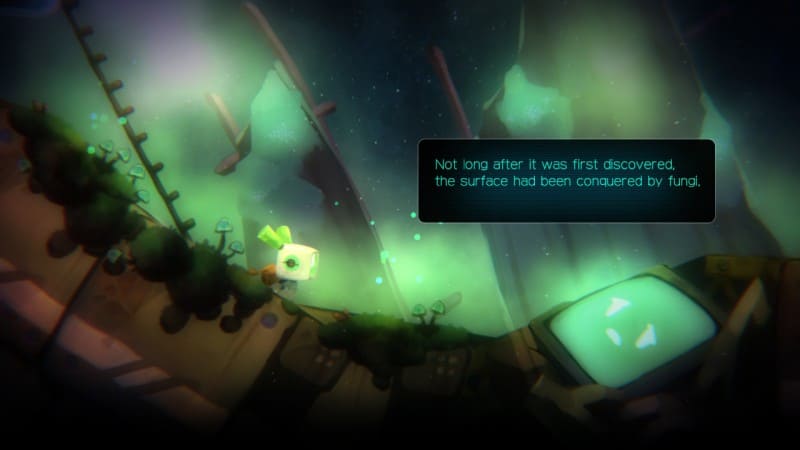 Audio-wise, similarly to the visuals, the audio is done well. It gives off another world type vibe and a very robotic atmosphere. It meshes very well with the game itself too. The devs outdid themselves in this department. The OST falls into the top ten game OSTs for me. 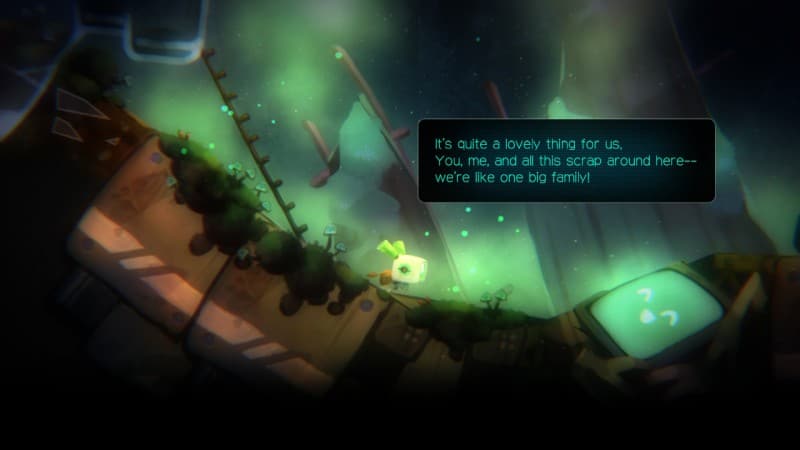 Void Terrarium is an enjoyable game. This goes double for someone who does not enjoy the genre of dungeon-crawling and roguelike. The game took a bit to get into, but once it had its hooks into me, I was immersed and loved every single second of it. 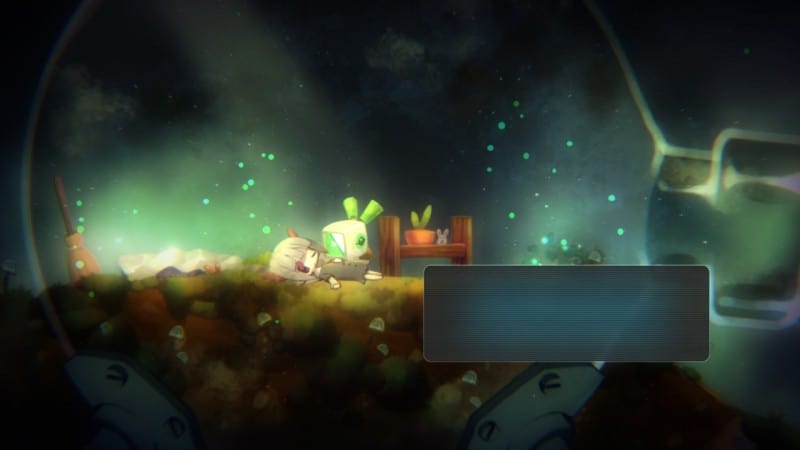 For me, Void Terrarium has a high replay value. Naturally, a roguelike has high replay value as no two areas should fundamentally be the same. The player will get replay value from just playing the game regularly. The game has multiple endings, and there is replay value to be had to achieve all the endings. 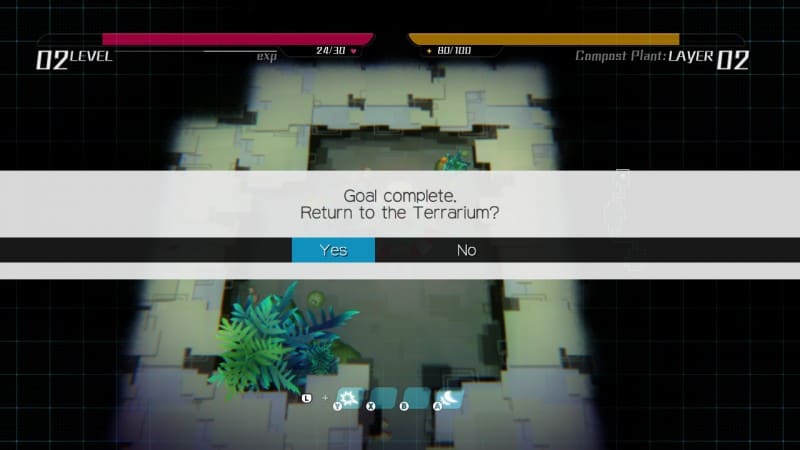 Void Terrarium, in short, is one of my surprise game hits of this year. Roguelike Dungeon-crawlers is not my type of game, so when I find one that I enjoy, I get fully immersed. Void Terrarium had its hooks in me. I found myself caring for Toriko, and whenever the Tomagachi system alerted me something was happening with her, I found myself pausing the game to make a plan and decided if I need to go back in that moment for her or can I continue adventuring. Not going to lie, I took 5-10 minutes at times to decide whats the best option and plan out the best strat if I decided to continue adventuring.

2020 has had some great games releasing to date thus far. I can put this quickly in the top 10 games I played this year. It will fly under several radars of gamers. However, Void Terrarium is a hidden gem. Anyone reading this, play this game. Coming from someone who does not like roguelike and dungeon-crawlers, I adore Void Terrarium. It is so far my hidden gem of the year. I hope more people will come to play this game whenever they get a chance.

*Special thanks to NISA for providing a Nintendo Switch review key*

A gamer and jack of all trades. I enjoy many things, but overall just enjoying life. Hopefully, I can add enjoyment to your life through my articles or interactions.
@mgs2master2
Previous How To: Update your GCLoader
Next Hardware Review: Plug&Play GCLoader from Black Dog Tech 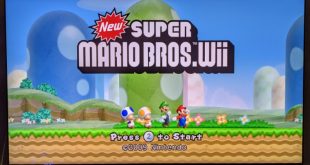 RetroArch and the Xbox Series S via Developer Mode