Today we’re going over the quirky, over the top game, Animal Super Squad ($9.99, DoubleMoose). I just don’t even have an intro for this game at all. I don’t have any interesting way of transitioning into a title like this. So how about we just…cut to the chase? 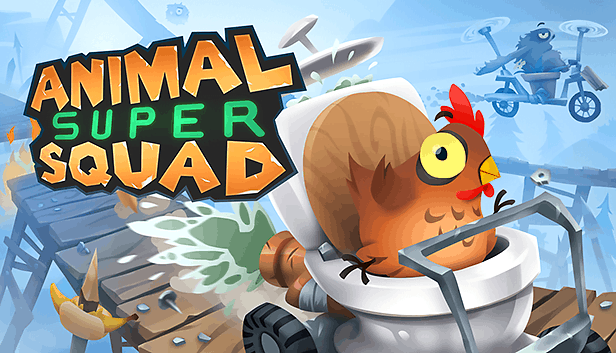 ‘Animal Super Squad is a physics-based adventure game that lets you play as your favorite animal. Speed through a world full of dangers and bananas. Create your own levels, share them with the community, or forget all that nonsense and just play other people’s stuff.’

The music as soon as you start this game definitely sets the tone for the whole game. You almost can instantly tell what the game is all about from that opening tune. It’s more of a salsa than a traditional video game song for games of this type. It not only features accordion synth, but also tons of random animals sounds in the background. It’s so fun that I literally left the main title screen on for a few minutes and just listened to it. And while it is fun, it will eventually loop. However, for being a title screen song, it’s great. When you go into the Adventure mode, you’ll have an overworld map. Not to spoil the overworld music, but it has a very Mario theme to it. You’ll see what I mean!

The rest of the music in the game seems to follow a similar design. Every level’s music is so on par with the actual level that it’s almost as much of a character of the game as the characters! All of the songs are either composed with animal sounds in them or the game just has animal sounds built into the background. Either way, it’s an incredibly nice touch that you never really notice unless you’re paying attention.

Furthermore, the sound effects from the levels are practically perfect sounding (explosions and such). The best part of the whole game in terms of audio was the animal sounds. Normally for me it’s the soundtrack, and don’t get me wrong, it’s great. But with each pilot (animal) was an ever-increasing cuteness in terms of their sounds. I couldn’t get over how much I was in tune with the animals as I heard them. They were just so gosh darn cute!

With regards to the visuals, there isn’t too much to say. As you can see based off of the pictures and the trailer, it’s a 2.5D game overall. The art style and the shading sort of remind me of World of Goo or Little Inferno. However, these games are definitely more vibrant in both color and tone. I think that the 2.5D aesthetic lends itself really well to the gameplay that they set out to create. Having depth to two-dimensional characters and their surroundings makes this game easier to play than just flat 2D characters. Especially if they were laid on top of a flat background.

And so, by doing what they’ve done here, I can discern what I need to from the foreground and the background and I feel like I’m much more successful than had they made this game look like a retro game. I’m not trying to rant against games that look like SNES or Genesis titles, I’m just saying that if they had chosen that style for this game, I would’ve dropped it like a bad habit. The game’s level design also lend into this looking and playing great! 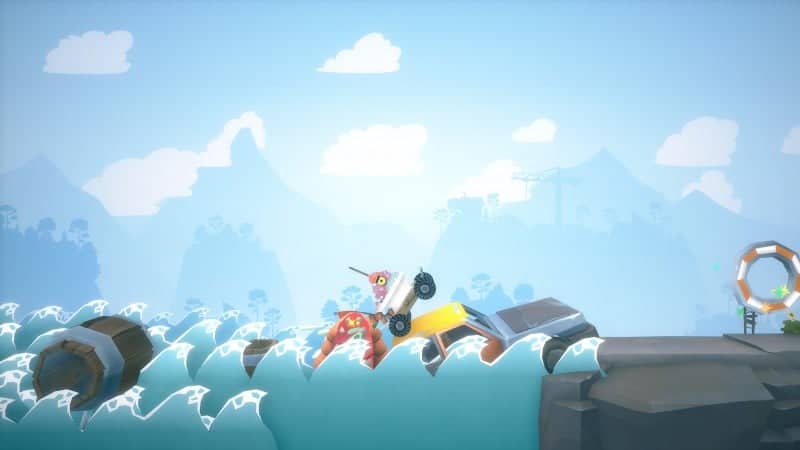 I’m just going to toss out game titles that this game clearly sought to emulate. You might think I’m crazy, but here goes. Trials, Excite Bike, Little Big Planet, Bridge Constructor: Portal, Donkey Kong, and Super Monkey Ball with some light platforming. This game is an undeniable treat that I wasn’t expecting at all. Add in some overwhelming cuteness and you have yourself the perfect combination for a successful animal themed game!

The premise is that you are an animal that can either somersault through an entire level as is or pilot a vehicle. Some areas require not being in a vehicle, but every area seems to be playable not in a vehicle if you’d like. The major difference is that you move a lot faster and have a greater leap distance if you’re in a vehicle, compared to rolling. It isn’t as easy as just rolling through the level as there are traps and obstacles abound. You need to jump and propel yourself through the whole level. These obstacles could be oil drums, swinging bridges, gaps, lava, spikes, and tons more that are too many to list!

There are also extras strewn throughout each level. You have to find extra pilots and hats. This seems to be the only way to unlock things. You’ll also find that there are extra bonus levels in the main levels so that means if you’re thorough and not rushing, you’ll get more game. It’s great too because the overworld tells you if you’re playing a level with collectibles or extra levels to find. If you didn’t find them, you can always go back later and try again. It’s a very forgiving game as it has checkpoints, but it’s still a challenging game overall. I couldn’t stop playing it and it’s currently the same week that Resident Evil 2 and Kingdom Hearts 3 entered my collection! 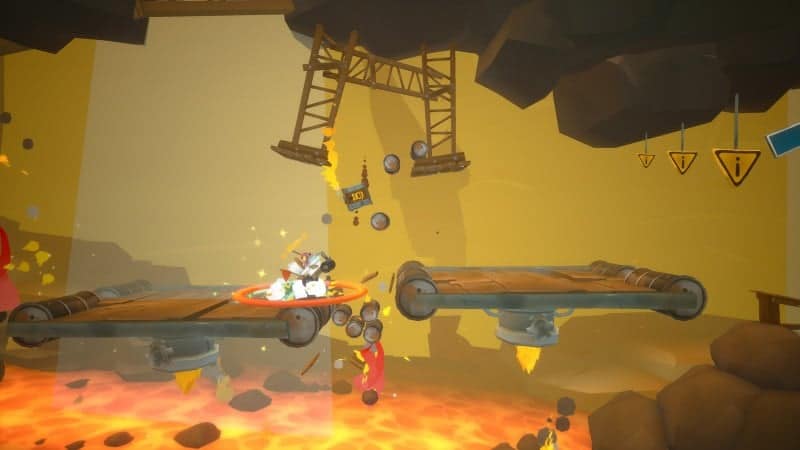 Besides the main adventure mode, you’ll find that there are other ways to keep the party going in this title. You will see that this game has a fully featured level editor for you. This means that you can create an infinite amount of levels and share them both with your friends locally or online with others. This essentially means that the game is endless with its creator.

There is also an online community for you to experience. If you never want to touch the level editor but want a seemingly endless supply of levels, you can go here. It lets you download and play levels that other players have created. I played through a handful of the levels for this review. It’s easy just to jump in and get playing the user created content. I won’t judge the whole title based off of user made levels though. Just know, like any game with user made content, this is hit and miss.

There’s a section in this game titled “Pilots & Hats”. I was confused for a second when I first read it. Then I saw that it was a way to customize the animals of your choice. While this is fun and cute, there is clearly only a finite amount of mixing and matching at the end of the day. And while that’s the same for any game, I would love to see more of these animals and their options in DLC.

Then there is a Featured Levels section on the main screen. This is more user created content. However, it’s sort of a “best of” section. These are levels that have been chosen overall, most likely based off of how fun and inventive they are. Or maybe it’s based on how much players play them. I doubt that they’re randomly chosen. No matter the reasoning as to how they end up in this section, they can always be bested by another newer level and rotated out.

Lastly, this game comes featured with your standard fare of achievements. Now, I’m not exactly an achievement hunter as I grew up with games that didn’t have them. But I did receive a fair amount of them just by being an average player. So if you wanted to get all of the achievements in Animal Super Squad, you may be able to set out to do it. 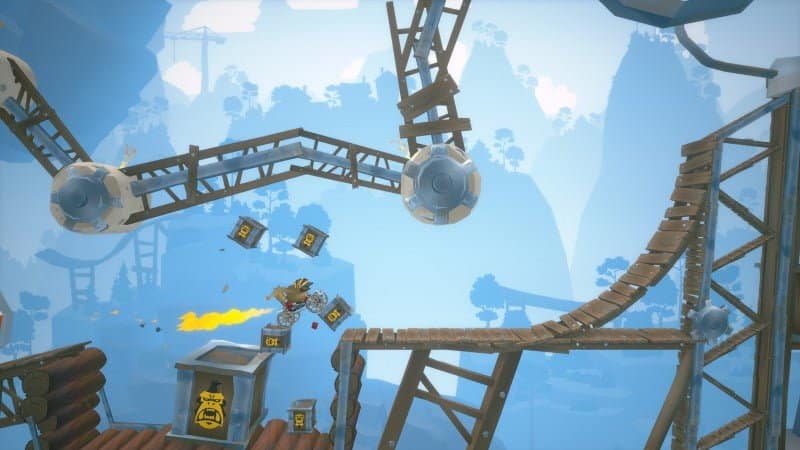 Interested in Animal Super Squad? Click here for XBOX One, here for PS4, here for Switch, here for Steam! 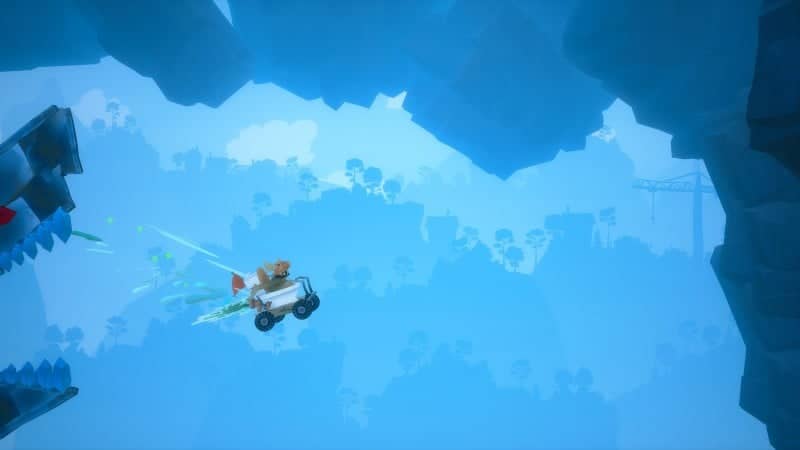