Review of Fallen Legion: Flames of Rebellion for PS4

Fallen Legion: Flames of Rebellion (YummyYummyTummy, $19.99) was pretty well received on the PS Vita (and that’s saying something) back mid-summer 2017. Today we’re looking at the title through new eyes since it has also been brought over to the PlayStation 4. Does it have what it takes to look and play as well as the PS Vita version did? Or did they overdo the console release of the game? Keep scrolling to find out! 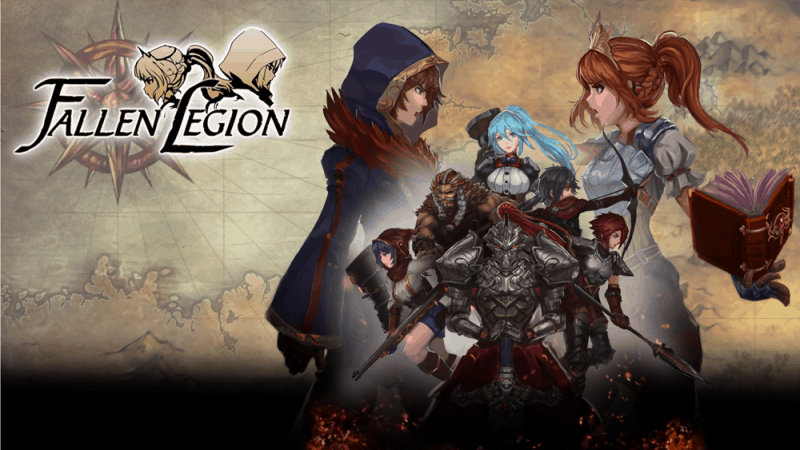 A trailer as well:

This game’s audio leaps out at you the very instant you start the game until the very end! This game is so jam-packed with sound effects and music, I don’t know how the download clocked in at just 1 and a half gigabytes. The music is so over the top and fantastic that you can’t help but love it. It’s big and epic and sets a scene for the type of game that you’re playing. If you’ve read my other reviews, you’ll know that I’m so tough on games when it comes to their soundtracks. This game though, its soundtrack is so fundamental to the way I feel about the game. The soundtrack should be available for purchase on its own. I just cannot get over how well it was mastered. It came booming out of my surround sound like I was watching a Hollywood movie. It’s so much more worth it than playing it on the Vita for this reason alone.

The sound effects are so perfect too. Shields cracking, weapons clashing, explosions, voice-overs, spells, all have different sounds. And again, these are all happening simultaneously over the great soundtrack. Everything just works and it works well. The caveat to all of the audio, of course, is how loud the game is versus other games. If you’re going to play this game, start it up the first time with your volume so low you can barely hear, then slowly turn the volume up to a usable level for this game. 9/10 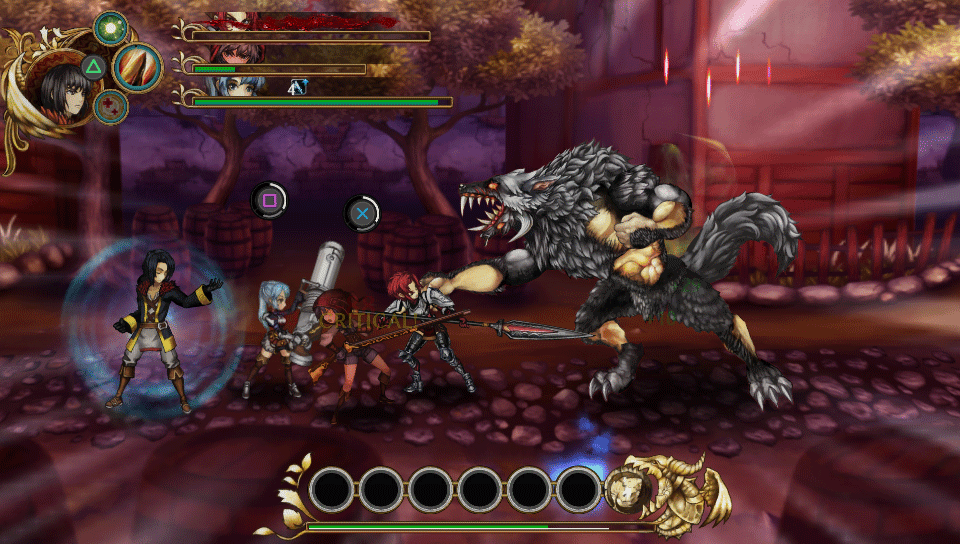 The visuals are probably my second favorite part of this title. I had never played a Fallen Legion game before, so naturally, I didn’t know what to expect. But this game definitely exceeds any minor expectations that I had for this genre. The entire game is in a 2D realm, but the characters stand at angles and rotate in place sometimes, thus giving more of a 3D illusion. After a while, I had actually forgotten that I was playing a 2D title and it all started to appear so real to me.

Every asset in the game seems to be hand drawn and colored. I couldn’t find much that was generated via software except for maybe the HUDs and the health bars and such. The artist’s renderings of the characters are simply beautiful and when there are lighting effects on the characters whilst clashing in battle, their hand-drawn bodies appear even more realistic and logical. I think this is where having a PS4 version of this game is really a great asset. Having this game in 1080p and presumably, 60FPS (I can’t test it, but it’s so damn smooth) is just something that the PlayStation Vita couldn’t bring to the table.

I also think that a benefit to this being on the PS4 is just the fact that you can see so much better all of the characters on screen, their stats, the effects, and really just the whole pie. When on a small 5″ screen, you’re going to miss out on the beauty that this title has in it. Not to mention all of the care and detail that was squeezed into every corner of the screen. You’ll just pick up a lot more visual fidelity in this version of the title. 10/10 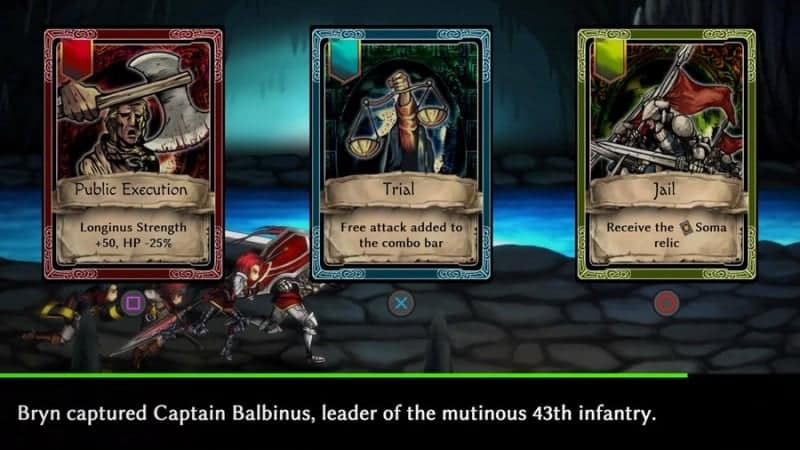 The most spectacular aspect of Fallen Legion: Flames of Rebellion (and probably other Fallen Legion games) is that I didn’t seem to need to have played the other games in the series. The title may be connected to the other entries, but this game is designed in such a way that it doesn’t require any pretense or context to understand its events.

In the previous game, Sins of an Empire, you play as a newly appointed princess. She’s forced to have to squelch an uprising rebellion in her kingdom. In this game, however, the title tries to tell the story from the other end of the spectrum. We get to play as the general of the rebellion and take over said empire.

That’s all that I’m going to talk about in terms of the storyline. Games that are longer like this get so convoluted and drawn out that it’s damn near impossible to give you all of the details and even harder to somehow leave out spoilers. I think telling you how the game kicks off is more exciting and helps paint a picture.

In terms of gameplay, that part is relatively easy to explain. You have the primary character who controls the healing and larger spell attacks by using the triangle button in combination with a direction. The other characters on the screen that are on your side are able to be controlled by using the other face buttons respectively. The strategy of it all is balancing out what character to use and when since they have cooldown times on each of them. As well as healing and/or reviving characters with the general if you can.

If you fail and all of your characters die, you need to restart pretty far back each time. The game is linear in fashion, it takes you from cutscene to fighting and fighting and fighting and cutscene, etc, etc. There are some other elements throughout to try to break up the monotony of it all, but unfortunately, to me, that did not help. I was horrible at balancing and died a lot and that was on an easier difficulty. I finally found my groove, but the fact that the game is 90% hands-on battles was so repetitive to me and I really got tired of it quickly.

If you like fight after fight, this game is for you. If you really don’t like that sort of thing, I would say that despite how much I loved the audio, this game is still so stagnant with repetition and would be hard for me to recommend to players like myself. 6/10 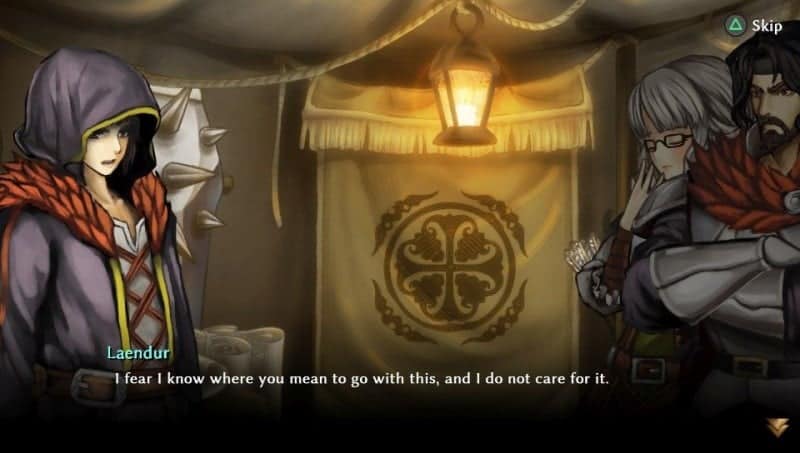 This game has different difficulty options in it. It also includes a one life mode that really ups the ante. If you’re a person who likes a challenge and thinks that they can hack it with one life, you really had better bring your A game. This game may very well be unbeatable on the one life mode or just the regular mode on the hardest difficulty.

I think that if you’re looking to maximize the value of this game and stretch it as far as you can, do the aforementioned ideas. As far as replay-ability, I would say that this game doesn’t really have any. It’s a linear game that sets out to tell a story in a cinematic way. Once you’ve found out the story, there’s hardly a reason to replay it. Or at least not straight away anyhow. Unless of course you’re a person who likes to collect all of a title’s trophies. 8/10 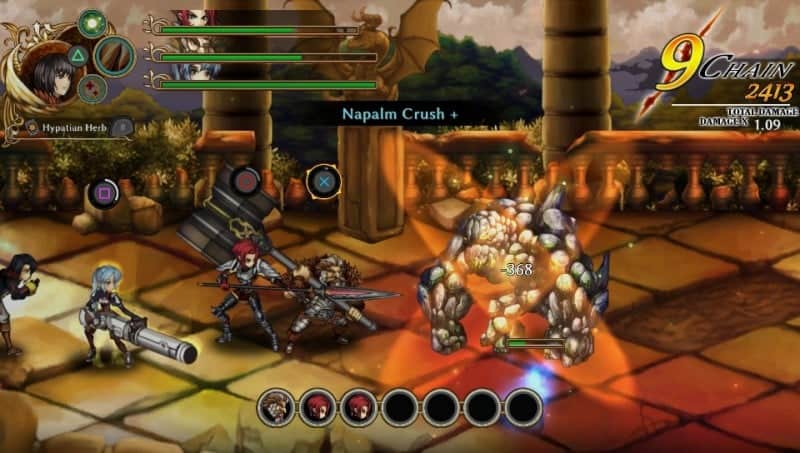 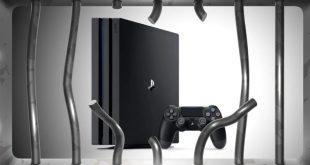